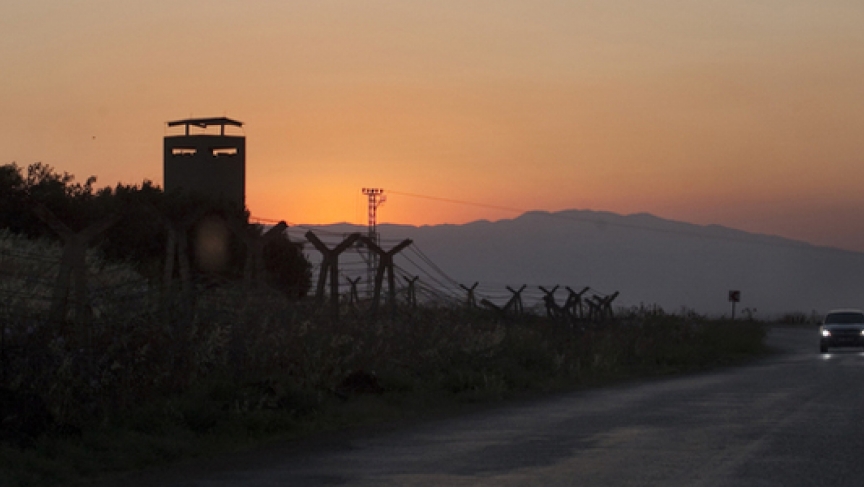 The refugees’ stories make Syria sound like a house of horrors. And in Guvecci, Turkey – poor, scrappy and peaceful – there’s plenty of time for chatting. Syrians who’ve fled visit with friends and relatives over cups of strong, sugary Turkish coffee. Most people in this region are ethnically Arab.

Hamed Abdullah came from the village Khirbet al-Joz in Syria about two months ago. You can see it from Guvecci, only about a mile away. He fled with his family on foot and came to stay with relatives.

“Yesterday I called my house and a soldier answered the telephone,” Abdullah said. “I said ‘what are you doing there? There is nobody left in the village anymore. What are you still doing there?’ The soldier said to me, ‘this village isn’t yours anymore, it’s ours. If you come back, we’ll kill you. Stay in Turkey and let your Prime Minister Erdogan keep you safe.’ That’s what he told me.

All he can do is wait, Abdullah said. With no documents or legal permission to be in Turkey, he can’t work. He’s even afraid to leave the house since the Turkish authorities could send him back. But still, it’s better than Syria.

“If they didn’t close this border, refugees would come here from all over Syria,” said Abdullah. “It’s not that the military wants our villages, they want to keep the border sealed. Even soldiers and officers are deserting the army and trying to come to turkey because they too are afraid for their lives.”

Some 50 families from Syria are staying with relatives in Guvecci. Mohammad, who only wanted to use his first name, lived for two months in a makeshift tent camp on the border before coming to stay with his uncle.

“There are a lot of people sleeping along the border while Syrian soldiers occupy the nearby villages,” Mohammad said. “Sometimes people go secretly through the woods to get to their houses back in Syria. We are like thieves going to our own houses to get some things. And then we return to our tents.”

Accounts by locals of Syrian troop movements along the borders are backed up by international observers. Peter Bouckaert, from Human Rights Watch, says that Syria wants to prevent stories of atrocities committed by government forces from leaking into the outside world.

“They very clearly wanted to stop any outflow of people into Turkey, and they’ve done the same on the border with Lebanon,” Bouckaert said. “The border guards check to see where people come from, if their IDs are from places where protests and crackdowns are occurring, they are not allowed to cross.”

Families and trade here have long zig-zagged across the border without much thought about either state. Ali Tekbas is an ethnic Arab citizen of Turkey. Tekbas says he’s made around 20 trips across the border recently with journalists’ cameras to document life in the border camps, and the civilian victims of Syrian snipers.

He says for months Guvecci residents have heard sporadic gunfire coming from the Syrian hills. Tekbas says late one night last week there was shooting at escaping Syrian soldiers.

“On that day we were coming back from another town, and when we arrived in the village, everyone was out on the street wondering what was going on after they were woken up by gunfire,” Tekbas said.

He knows they were Syrian military defectors because he saw them picked up by Turkish military vehicles.

“Five or six cars came to our village from Yayladag,” he said. “When they left, we saw that they were wearing Syrian military uniforms.”

Refugees are still camping wild in the mountains in the Syrian borderlands, close enough to Turkish soldiers to protect them from Syrian fire. As their military tries to close off the soft spots along the border, Syrians continue to seek them out.