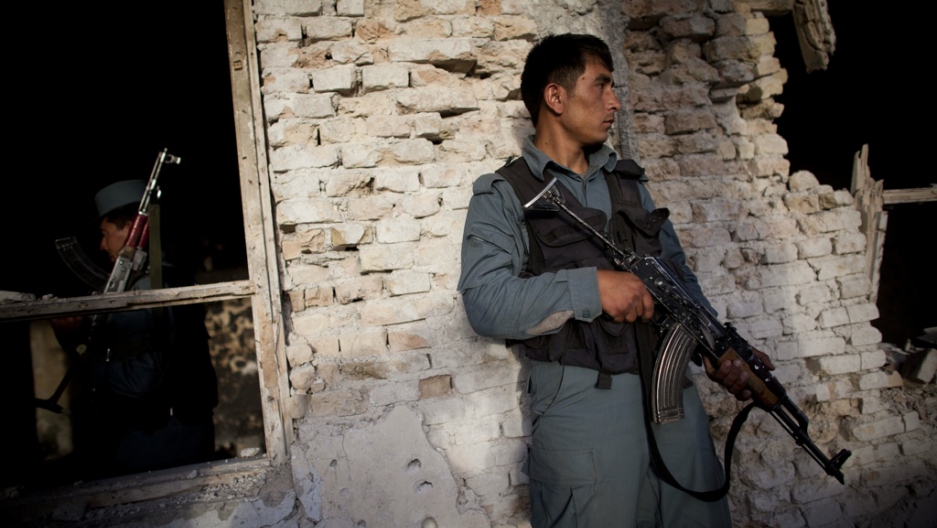 An Afghan police officer secures a building attacked by the Taliban on May 14, 2011 in Kandahar, Afghanistan.
Credit: Majid Saeedi
Share

KANDAHAR, Afghanistan — Kandahar, the beating, political heart of the Afghan south and bastion of Taliban strength, is a city perpetually on the brink.

Central to the NATO mission in Afghanistan, this vibrant yet volatile Pashtun capital continues to grapple with the destabilizing influence of billions of dollars of foreign aid, and the waves of political violence that plague its wide, tree-lined streets.

A Taliban assassination campaign targeting high-level leaders and allies of the president — including the president’s brother, Kandahar’s mayor, and the provincial chief of police in the past four months — has again thrust Afghanistan’s second-largest city toward the edge of chaos.

“People in Kandahar are stuck between two governments: one is the government of [Afghan President Hamid] Karzai, and the other is the Taliban government,” says Hajji Naik Mohammed, an elder from the Noorzai tribe in Kandahar’s Panjwayi district, 12 miles from Kandahar city.

On July 12, Ahmed Wali Karzai, the powerful half-brother of the president, and arguably the most influential man in southern Afghanistan, was shot dead by one of his own security guards at his home in Kandahar.

While Ahmed Wali Karzai officially held only the low-ranking position of provincial council chief, his familial links to the central government and coveted contacts with foreign contracting firms dwarfed the authority of Kandahar’s governor.

Because Karzai, armed with cash and a larger-than-life personality, nourished his own complex web of politicians, tribal leaders, drug smugglers and local businessmen for almost a decade, his murder set off a potentially dangerous power struggle in the already tumultuous province.

On July 27, a suicide bomber assassinated the plucky and well-respected mayor of Kandahar, Ghulam Haidar Hamidi, who locals say was working to stabilize the city in the wake of Karzai’s death.

Some speculated Kandahari warlords involved in illegal land grabs, and whom Hamidi had taken to task as mayor, had called on the Taliban to carry out the attack.

As the old order of centralized patronage networks threatens to collapse along with its patrons, a number of power-brokers are angling for political and economic supremacy.

“We have to accept that this is a war,” Hamidi told GlobalPost in an interview just hours before he himself was slain by a Taliban-dispatched assassin. “Politically, it’s very hard for us. But the warlords, they are losing their power. We are fighting against corruption.”

One decisive element that may ultimately shape the political landscape of a post-Karzai Kandahar is the actions of the tribes, observers say.

Placated by Karzai during his informal rule, Kandahar’s tribal elders, some of whom say they were forced to rely on Karzai for favors, now say they see an opportunity to achieve stability by dividing power more equally among the tribes.

Karzai, leader of the Popalzai, an influential tribe to which the president also belongs, is accused of promoting his own Popalzai kin to top governmental posts at the expense of Kandahar’s remaining clans.

GlobalPost in Kabul: The myth of Afghan democracy

With governmental posts, funds for reconstruction contracts, and access to security forces more widespread, the Taliban will find it more difficult to prey on disaffected tribesmen, elders in Kandahar say.

“There are tribes in Kandahar that were harassed by the local government, harassed by the security forces. They did not receive humanitarian assistance, and some of them joined the Taliban,” says Hajji Fazal Mohammed, an elder of the politically marginalized Ishaqzai tribe in Kandahar.

“Now, we want to bring them back and give them equality. We want to tell them that this government is theirs,” he said.

Izzatullah Wasifi, a former anti-corruption chief and whose father was the leader of the Alikozai tribe, had harsh words to say about the international community’s assistance in constructing a personality-based political structure with Karzai as its core.

The tribes are crucial, he says, but leaders should strengthen formal government institutions as well.

“If NATO wants another dictatorship in Kandahar, they can have it. Or they can implement law and order,” Wasifi said, referring to the NATO-led coalition of foreign forces in Afghanistan.

Approximately 30,000 foreign troops are stationed at Kandahar Airfield, just outside the city.

GlobalPost in Kabul: Why is Pakistan bombing Afghanistan?

“The Popalzai [Karzai’s tribe] have done nothing but contribute to dismantling the tribes,” Wasifi continued. “Right now, everyone is running away from the system. They are the enemy of the system. They should be coming to the system, a system based on the rule of law.”

Some in Kandahar say the province needs another strongman like Gul Agha Sherzai, one of Kandahar’s former governors and a native of the province, to fill Karzai’s shoes.

Sherzai was a bitter rival of Karzai and has his own controversial record in the province. He maintained ties to the drug trade and was accused of facilitating the insurgency by harassing former Taliban.

But rumors say he is at the top of President Karzai’s list of potential candidates for the Kandahar governorship.

“The new governor of Kandahar should be Sherzai, he will be the best,” Fazal Mohammed said. “He has both the experience and the tribal influence.”

But as the political wrangling continues, the Taliban insurgency in Kandahar also rages on. Residents in the city say recent violence is diminishing hopes that the situation will improve.

“Security is not good right now and the people are afraid,” Haji Wafa Khan, a 50-year-old shopkeeper in Kandahar city, said. “The government is weak. The police are weak. What can we do? We have no hope for the future.”