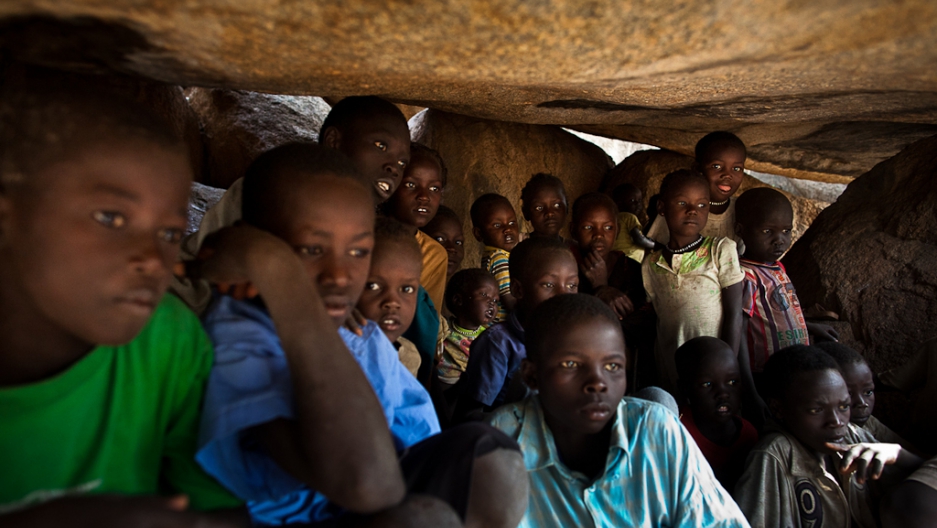 NUBA MOUNTAINS, Sudan — Hospital wards here are overflowing with civilians who have suffered attacks at the hands of the Sudan army.

The scenes are shocking. In one hospital room a nurse tried to clean the blown apart face of a young boy. In another, a 12-year-old girl, named Kaka, suffered from advanced tetanus after her arm was cut off by shrapnel. Doctors said she had little chance of surviving.

The children are just two examples of the growing number of victims pouring into the ill-equipped hospital here as the northern Sudan army of President Omar al-Bashir's regime continues attacks against a people they view as the enemy.

The violence is being characterized by aid groups and the United Nations as war crimes and crimes against humanity.

Human Rights Watch, which said thousands have so far fallen victim to attacks, has called for international peacekeepers to help bring an end to the atrocities.

"Tens of thousands of civilians in Southern Kordofan are in grave danger, and no one is on the ground to report on what is happening, much less do anything about it," said Daniel Bekele, the director for Africa at Human Rights Watch.

"An international presence in Southern Kordofan is urgently needed to prevent further atrocities," he added, urging the United Nations Security Council to immediately respond, just three weeks after the mandate of the U.N. peacekeeping mission in Sudan expired.

During the country’s 22-year civil war, the people in this region, known as the Nuba, fought for the South. But after South Sudan achieved independence on July 9, the Nuba's homeland fell on the wrong side of the new border.

The Bashir regime now appears to be punishing the Nuba for its Southern loyalties. While the former rebel army, known as the SPLA, has become the national army of South Sudan, the Nubas have been forced to form their own splinter group, the SPLA-North, to defend against the northern attacks.

The fighting has raged in South Kordofan since early June.

The call for international intervention comes a week after the release of a U.N. report, leaked to the international press, that defined the violence against the Nuba people as war crimes and called for an investigation.

Details of the massacres have been hard to come by, and barely reported, because the northern regime restricted access to South Kordofan province. But GlobalPost managed to enter the Nuba Mountains to witness firsthand the results of the attacks.

What was once a sleepy rural hospital here now looks like an overcrowded frontline emergency clinic. The hundreds of injured are looked after by just one doctor, an American, and two nurses. Although they themselves are in danger, they said they intended to stay as long as possible.

Tom Catena, the American doctor, said he had been shocked by the scale of the violence taking place in the Nuba Mountains.

“I don’t think any Nuba wants to join the North. Either they will fight to the last or throw these guys out,” Catena said. “They don’t have any aircraft or heavy artillery but they have been able to hold them off or win battles in many cases. I think in the end they will win, they are too stubborn to lose.”

The fighting in the Nuba Mountains and the surrounding territory of Sudan’s South Kordofan province has displaced thousands, if not hundreds of thousands, of people. Many of those refugees are now living in caves in the region’s rock-faced mountains.

South Kordofan’s governor, Ahmed Harun, who is wanted by the International Criminal Court on charges of war crimes in Darfur, insisted Tuesday that there was no ethnic dimension to the conflict, and said he was fully cooperating with humanitarian agencies operating in the region.

It went on to say that the army's near-daily bombings had killed or injured scores of men, women and children and has displaced more than 150,000 people, half of them in just the last few weeks.

The United States and United Nations both tried to persuade Bashir’s Khartoum government to let a U.N. peacekeeping force remain in South Kordofan after its mandate expired when South Sudan became independent, but to no avail.

"With no eyes and ears on the ground, the Sudanese government may believe it can continue this brutal campaign with total impunity," Bekele said. "The (UN) Security Council should send a strong message now that those responsible for these violations will be held accountable."

Trying to escape the slaughter, many Nuba villagers have fled.

When the rural town of Tanguli was bombed this week, the village's mud huts were destroyed, killing several people. Those who survived escaped to a nearby mountain where they are attempting to eke out an existence among the rocks with little to no access to food or health care.

The village chief said several other groups of villagers are also living along the rocky peaks. Many have come from Dalami, he said, where fighting between the two armies has been frenetic.

A 15-year-old girl, sitting on a bed between two massive boulders, described how she fled Tanguli. “I had never seen such things before — bodies burned, dead bodies with their throats cut, a man shot as he ran,” she said.

She said she hiked for more than a week to reach the relative safety of the mountains.

“When I arrived here they started bombing with Antonovs (Russian-made planes used by the Sudan army) and so we fled to these mountains for safety. I have no idea if I will be able to go back or stay here for a long time. I don’t understand what is happening.”

In their effort to fight back, young Nuba men are training to become fighters for the SPLA-North.

One young student who joined when his school was closed says he has no choice but to fight now. “My brother was almost slaughtered by them (government forces), my father could never sleep at home. They would come and ask for him, and if they failed to get him they would burn down our home,” he said, remembering the last war.

The new soldier drank coffee with his mother, while visiting her nearby village. They talked about their relatives who were arrested and detained in the last war.

When asked if she is worried about the risks her son is taking by joining the SPLA-North, the mother smiled and said: “I am happy he is joining. We have no choice. He must fight. I am happy and proud.”