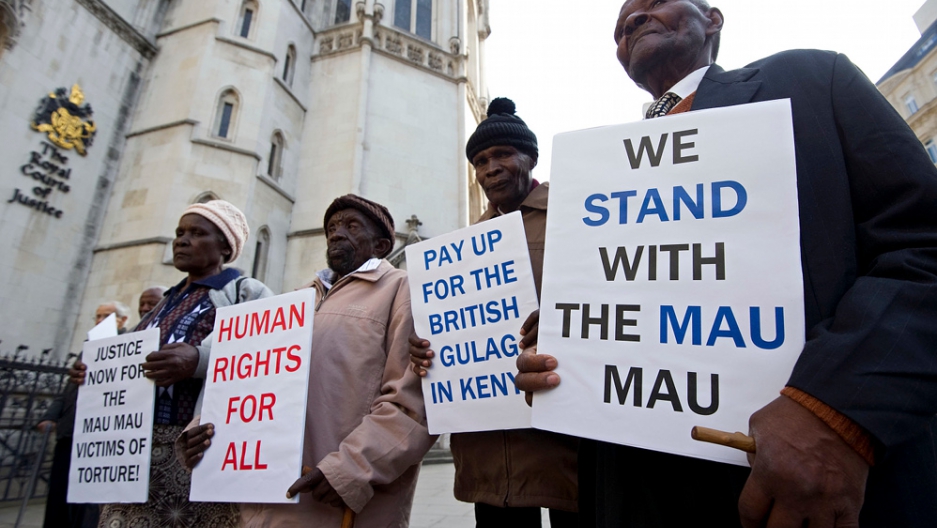 Kenyan nationals, from right, Wambugu wa Nyingi, Ndiku Mutua, Paulo Nzili and Jane Muthoni Mara, (L) outside the High Court in central London, on April 7, 2011. The four elderly Kenyans have won the right to sue the British government for brutality they claim they suffered at the hands of the British army during the 1950s Mau Mau uprising. They are hoping their cases, which include castration, torture, sexual abuse, forced labor and beatings, will secure a statement of regret over Britain's role in the Kenya Emergency, and a victims' welfare fund.
Credit: Carl Court
Share

NAIROBI, Kenya — Four veterans of Kenya’s struggle for independence from British colonial rule in the middle years of the last century have been cleared to sue the British government for damages by the High Court in London opening up the possibility of many more claims from other former colonies.

The three men and one woman, all in their 70s and 80s, celebrated in Nairobi last week as they received news that their legal case seeking compensation for torture could proceed.

“I am very happy that the British people are becoming just, not like in the colonial days,” said Wambugu Wa Nyingi, 83, one of the four claimants and a survivor of the infamous Hola massacre of 1959 when 11 prisoners in a concentration camp were beaten to death by guards.

Nyingi spoke to GlobalPost moments after a judge at London’s High Court rejected an attempt by Britain’s Foreign Office to pass responsibility for the actions of the colonial administration to Kenya’s government as “dishonourable.”

Justice McCombe added that there was “ample evidence” suggesting “systematic torture” of some of the 70,000 Kenyans detained during the Mau Mau uprising, also known as the Emergency.

Britain’s Minister for Africa accepted the ruling but said the Foreign Office would continue to defend itself against liability.

“It is right that those who feel they have a case are free to take it to the courts,” said Henry Bellingham. “We understand the pain and grievance felt by those, on all sides, who were involved in the divisive and bloody events of the Emergency period in Kenya,” he said.

The four claimants were among dozens of elderly veterans of the so-called Mau Mau, a tribal insurgency that battled against the colonial government in the 1950s.

“These are test cases but if they succeed there are many more,” said George Morara, programme officer at the Kenya Human Rights Commission which took up the Mau Mau veterans’ case in 2003. Morara told GlobalPost there were up to 30,000 others waiting to file similar complaints of torture.

The legal case is brought by London-based Leigh Day & Co, a law firm has made a name for itself suing the British government on behalf of groups of Kenyans. In 2002 Leigh Day won a $7.3 million settlement from Britain’s Ministry of Defence for 233 victims of injuries caused by abandoned British munitions, although subsequent investigations by journalists threw into doubt the veracity of many of the claimants’ stories.

Another multi-million pound Leigh Day case alleging that British soldiers had raped hundreds of Kenyan women over a 30-year period was abandoned in 2004 when investigators found police reports had been forged.

In June last year Leigh Day sued the British government on behalf of the veterans who claim to have been tortured and abused. Paulo Muoka Nzili and Ndiku Mutwiwa Mutua claim to have been castrated while Jane Muthoni Mara says she was sexually assaulted after her arrest when she was 15 years old.

“[The ruling] gives me hope that I am on the way to being compensated for what I suffered,” said Nzili, 83. “I wish to go to court now so that people around the world will know what happened here.”

But Morara hopes that a lengthy and expensive court case will not be necessary and said the legal team will push for an out-of-court settlement instead.

“If this case protracts any longer these aged claimants may die,” he said. One of the original five claimants has already died of old age waiting for the case to come to court. The Mau Mau case has fascinated the British public and historians by casting a light into one of the darkest corners of the country’s colonial past.

Earlier this year thousands of documents that the Foreign Office had spirited out of Kenya ahead of independence in 1963 and subsequently “lost” were discovered in an archive. The government agreed to release the papers which researchers say include reports of atrocities and officially sanctioned abuse which will provide key evidence in the case due to be heard in London next year.

If the claim for compensation by the four Kenyan veterans is successful it is expected to open the floodgates to similar claims from Britain’s other former colonial territories where the path to independence was also violently contested.