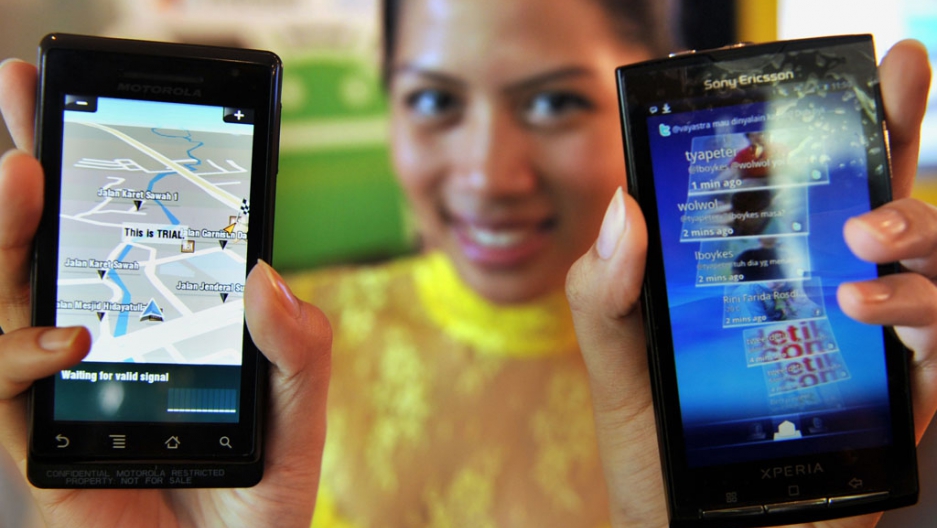 The emerging market of 240 million has the world’s second largest Facebook community, its third largest Twitter base and around 40 million internet users, thanks to the rise of internet-enabled mobile phones.

“This is going to be an Asian future,” Schmidt told hundreds of Indonesian entrepreneurs and Google groupies at a summit here in Bali.

Indonesia's large number of youths (30 percent of the population is between 15 and 24), and its growing middle class, with per capita income having risen to $3,000 a year, make it a fertile ground for entrepreneurship.

Couple that with the internet age, says Schmidt, and you have the makings of a very powerful regional player. “You’re going to have an internet explosion, and that explosion will change the country,” he said.

This internet explosion won't come without its challenges — infrastructure at the top of the list — but most argue the benefits outweigh the negatives.

Indonesia’s incredible sprawl — it spans the distance of the United States — its cumbersome bureaucracy and wide income disparity pose some of the greatest obstacles.

Most Indonesians access the internet through their phones or cafes because they can't afford PCs at home. This means that, despite rapidly rising connectivity Indonesia still has the lowest internet penetration rate in Southeast Asia at 18 percent.

(GlobalPost in Jakarta: Is Indonesia the next Silicon Valley?)

Forty million people having access to the internet is no small number, but it is so large mainly because Indonesia has a big population and not because levels of connectivity are high.

Last year Google generated $64 billion for U.S. businesses, he said. “That’s an ad for Google, but it gives you an example of the scale that can be achieved by building your businesses on top of the internet.”

The economic returns provided by the web are certainly a positive. But some analysts say increased internet access can also lead to abuse.

Many activists use new media to express their opinions and distribute news reports, but radical groups are also using it to translate propaganda and spread their extremist messages online.

“The internet can be used for a lot of things, good or bad. It can be used by peaceful activists or radical Islamists,” said Andreas Harsono, an Indonesian researcher with Human Rights Watch.

At the same time, people in Japan used the web to find lost relatives and organize aid after the earthquake and tsunami in March.

In Indonesia activists have used Facebook to rally against corruption and draw support to various causes. Last year thousands of people joined an online movement to pay the $33,000 fine slapped on Pritya Mulyasari, a housewife charged with defamation for sending an email to friends criticizing her treatment at a local hospital.

Groups such as these demonstrate the internet’s ability to mobilize people scattered across Indonesia’s 17,000 islands, say human rights activists.

In early July hundreds of workers went on strike at Freeport McMoRan’s Grasberg mine in Papua, one of the world’s largest gold and copper reserves. Many said they had learned through the internet how low their wages were compared to those at Freeport’s other operations and they were appalled.

“Without the internet they cannot learn about the imbalance,” said Harsono, who frequently receives news of abuses through his online community. On July 22, for instance, he learned that two activists in southern Papua had been arrested when one of his contacts posted an update on Facebook.

Some say better access to information could deter foreign investors who aren't looking to deal with strikes and higher wage demands, particularly since Indonesia’s low wages are one of the reasons it has become an attractive manufacturing base relative to China.

Gita Wirjawan, chairman of Indonesia’s Investment Coordinating Board, says the government understands those challenges and has the ability to deal with them. “Take a look at the macro-picture, take a look at the numbers. It’s sexy,” he said.

Indeed, Southeast Asia’s largest economy is drawing the eyes of investors eager to get at its large consumer base and natural resource wealth — particularly with rising prices for coal, rubber and palm oil promising high returns.

Rama Mamuaya, the founder of Indonesian tech-blog DailySocial.net, estimates that there are more than 700 tech startups and a new one launches every week.

But with explosive growth come new worries. Mamuaya fears a tech bubble will arise from the large number of domestic investors willing to throw money at startups.

Investments of millions when companies haven't started generating any revenue are driving people to start even more start ups, which Rama fears could create a bubble like the one in Silicon Valley. Rather than wait to make sure the market can absorb them, more and more youths are trying to get into the tech startup scene while it’s hot.

But many Indonesians say it’s about time the international community paid them some attention. And Schmidt’s visit gave them room for more optimism.

Vice President Boediono's spokesman Yopie Hidayat told Dow Jones that the company plans to open an office in Indonesia before 2012 as part of a strategic step to support its advertising business.

On Friday, Schmidt said Indonesia’s 50 million small businesses should have some ability to sell and market their products online. “When that happens their product goes from a very small market to competing in the world, all because of the internet.”

The web also gives entrepreneurs tools they can use to grow their businesses. Motorcycle taxi company Go-Jek, a new startup, and the winner of an entrepreneurship competition held in the run-up to the regional entrepreneurship summit, relies on mapping software to track its drivers and calculate travel costs based on distance.

Schmidt called the company a “classic example” of one that uses the internet to build a service on what has been an informal transportation system.

“Once upon a time technology tended to spread from elite to elite, and huge generations of able people were discriminated against,” said Schmidt. “In this age of the internet, technology is accessible, it’s inclusive, and it’s available to you.”

Editor's note: This article was updated to reflect the fact that Eric Schmidt is the chief executive at Google, and not the web giant's founder.