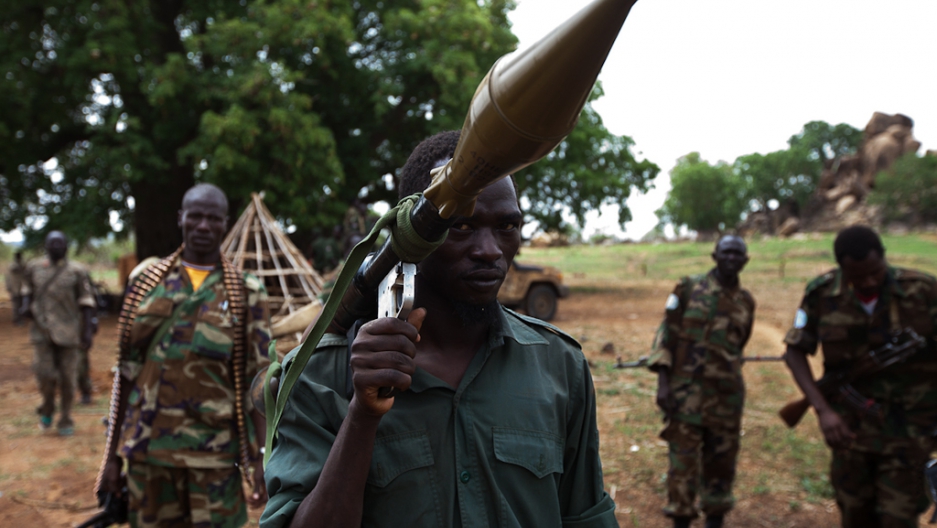 The fresh recruits chant traditional battle songs. A man leaps into the air waving his wooden gun like a sword and shouts, followed by the cries of a hundred other voices in the hot midday sun.

This ragtag bunch may well become a potent threat to Sudan President Omar al-Bashir's 21-year regime in Khartoum. Soon they will be issued real guns and join the ranks of the Sudan Peoples Liberation Army-North, a rebel force that has already beaten back the Sudan army in pitched battles.

Brigadier Sied Catchum, 73, strides in front of the recruits, lecturing them on the motivations of the SPLA-North.

(Check out: Amazing photos of leopard attack in India)

“We are fighting to help all the marginalized people of Sudan,” said Catchum to the men in training. “We will take this fight all the way to Khartoum.”

Catchum, third in command of the rebel force, fought against Bashir for decades until the peace deal that brought South Sudan independence on July 9.

But the freedom of South Sudan left the Nuba people on the wrong side of the border. Nuba civilians are being attacked by Bashir's army and now the SPLA-North rebels are fighting back.

The Nubans fought alongside the southern SPLA forces for years and in January they voted firmly for South Sudan’s independence. However their mountain homeland is north of the border, in territory ruled by Bashir’s Khartoum regime.

Bashir’s government appears determined to punish the Nuba for their past resistance. As South Sudan celebrated its independence, Nuba civilians were bombed in their fields and their leaders assassinated.

Some 73,000 Nubans have fled the government attacks and a new United Nations report, leaked this week, charged that the Sudan government’s army is responsible for war crimes. The Bashir regime has already been charged with war crimes in the western Darfur region, now it seems to be using the same violent tactics against the Nuba people in South Kordofan province. Human rights groups charge that Bashir's regime is carrying out ethnic cleansing of the Nuba people.

In response to the government violence, the Nubans are fighting back in their revitalized wing of the Sudan Peoples Liberation Army-North. It is called North to distinguish it from the main branch of the SPLA which has become the army of South Sudan.

The new recruits have more personal reasons for joining the SPLA. “I joined the SPLA because I lost so many friends in the bombing, my best friends,”  said Aut Maliga, an elderly farmer in Kurchi where five bombs were dropped on a market.

At least 16 civilians were killed in the Kurchi market attack, including 8 women and children and 32 were taken to the hospital, said Maliga.

Abdullah, a middle-aged travel agent from Kadugli, volunteered after seeing four friends killed when he tried to flee the city with a group of 10 people.

"I lost so many in Kadugli. First one of us was gunned down by a Dushka (anti-aircraft machine gun)," said Abdullah. "Then, when we were carrying him, two more were killed by an aerial bomb. Another was killed on the way here.”

The African Nubans have been fighting and fleeing from Arabs from the North for centuries, first when slave raids decimated the population, and more recently to fight for greater rights and representation in Khartoum. The most recent outbreak in fighting occurred on June 5 when Sudan army forces attempted to disarm the SPLA-North while secret police force moved through Kadugli shooting suspected rebel sympathizers.

Hawa Mando, a member of the SPLA-North's political wing, barely escaped Kadugli, but she said many of her fellow workers were not so lucky.

“I saw six people gunned down in the U.N. safe haven zone where I fled for protection when I ran out of food for me and my family,” she said. “When I arrived they told me my name was on a list and I had to leave. Members of the secret police force moved through the crowd, picking out people on a list and shooting them. They dragged them off to be slaughtered like sheep.”

Mando managed to escape in disguise and she walked through the mountains where she joined up with other fleeing SPLA-North politicians. They are now in the process of creating a new government, which will be announced by Abdel Aziz al-Hilu in the coming days.

The SPLA-North appeared to be less surprised than the civilians at the offensive by the Sudan army. They quickly took defensive positions and fought off the Sudan army troops. Since then the SPLA-North has moved aggressively to consolidate its control in the Nuba Mountains.

Instead of eliminating the military threat of the SPLA-North and decimating the leadership of its political wing, the SPLM, it appears the attacks by Bashir's army have galvanized the Nubans' fighting ability.

Two weeks spent behind the SPLA-North lines shows a confident and well-armed fighting force that should present a serious challenge to Khartoum.

In El Hamra, a garrison town just south of Kadugli, the SPLA-North force was able to decisively rout a Sudan army force and seize 43 vehicles and a supply of weapons. The town of El Hamra was destroyed in the full-scale battle between two large forces. The town in ruins, shiny new bullets are piled up in foxholes left behind when the SPLA moved forward. Massive army trucks are just burned out shells. Destroyed huts are visible and and two bodies of Sudan army soldiers have rotted in the sun.

“We are controlling more than 5 counties," said a young SPLA officer named Muburak. “They can not attack us, this is our land, they attack us and withdraw. Bashir planned to disarm us, but we are now disarming him like in El Hamra."