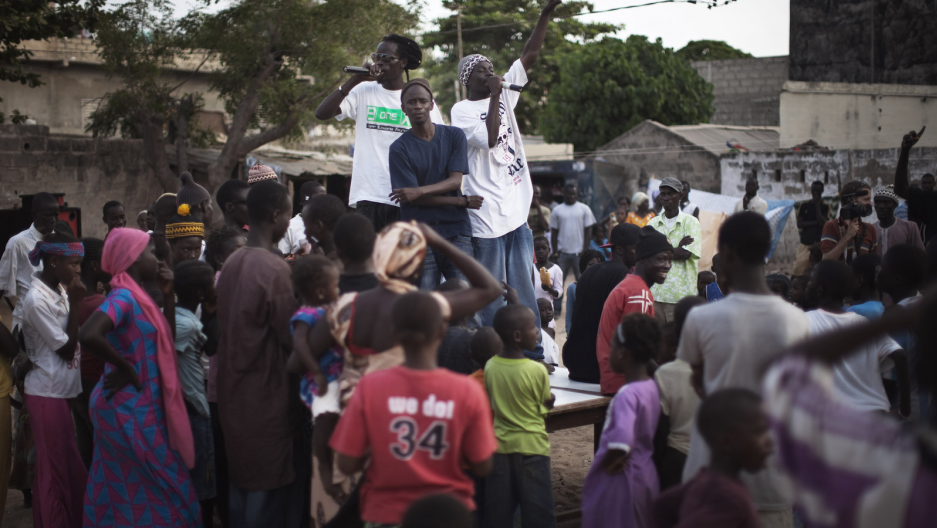 Members of the hip-hop group Y'en a marre perform during a community concert in the Dalifort neighbourhood of Senegal's capital Dakar, June 18, 2011. With nearly 40 local chapters formed across the country since January, "Y'en a marre" is focusing on encouraging youths who have turned 18 since the last election in 2007 to register for the February 2012 vote — and to vote against incumbent Abdoulaye Wade. Using a mix of concerts, demonstrations and stomping the streets in black T-shirts emblazoned with their name, the group has been hard at work raising youth awareness of government corruption and mismanagement — and urging Senegalese to act instead of just complain over cups of 'ataya' tea.

It has been getting unusually hot in the normally stable and democratic Senegal. In the shadow of the Arab uprisings, recent riots across this small West African country have seen thousands of angry demonstrators take to the streets ransacking government buildings and defacing public property.

Riots finally escalated to unprecedented levels on June 23. But while the 12 million people in Senegal are fed up and ready for change, a full-scale revolution in the likes of an "African Spring" has yet to take hold.

At the helm of the recent protests is a group of young musicians and journalists. They organized themselves in mid-January under the name Y'en a marre, or "enough is enough" in French. The protests are in reaction to incessant power cuts, escalating food prices, 50 percent unemployment and a recent attempt by Senegal's 85-year-old President Abdoulaye Wade to amend the constitution to allow him a third run at next year's national elections.

"The first thing we did was to explain that we don't want what happened in Egypt or Tunisia to happen here," said Alioune Sane, one of the group's founding members. "We don't want people immolating themselves, and we don't want young people going into the street to burn things down. We tell them it's not the government that would suffer by doing this, but us, the citizens. People need to fight at the ballot box." So the group is encouraging over one million unregistered voters to sign up. Senegal has often been deemed a model of democracy in a region riddled with civil wars and political upheavals. When President Wade took power in 2000, it was under the slogan Sopi, or "change."

The Senegalese had been living under 40 years of socialist rule and were optimistic that Wade's Democratic Party would revitalize a weak economy and strained social sector. But these hopes fell short. Rather than tackling the everyday, endemic problems, Wade found different priorities. In 2010 alone he spent over $27 million on an African Renaissance statue that towers over Dakar and $10.5 million on the World Festival of Black Culture. Wade also installed his son, Karim, as head of several ministries.

But the final straw for the Senegalese came last month. President Wade tried to make constitutional changes that would drop the percentage of votes needed to win elections from 50 percent to 25 percent and create a new vice president post that many suspected would be passed down to Karim. Macky Sall was President Wade's Prime Minister from 2004 to 2007. He was removed from his post and went on to form his own party and he's now running for president in February. "Y'en a marre has become a state of being for people here," he said. "They've had enough of the power cuts, the government the impunity."

And it's about time, said Fadel Barro, a journalist and one of the Y'en a marre founding members. He said the Senegalese tendency to be pacifist may explain why it has taken the Senegalese so long to fight back. "Senegalese are quite fatalist," Barro said. "It is the only country where you find a neighborhood called Khar Yalla. Khar Yalla means 'waiting for God.' That means people will wait and wait for God to do something. It is a very defeatist attitude, but people here are like that. Y'en a marre is our first fight," Barro said. "And we are trying to tell people to give up this fatalist attitude."

While social media played an integral role in rallying support in the North African uprisings, in Senegal Facebook and Twitter have, so far, played a less prominent role. That's in large part because the technology hasn't really caught hold. About 60 percent of Y'en a marre members live outside Senegal. Many of those living in the country have been arrested for speaking out against the government, yet the group continues to advocate for non-violence. But, as group members say, if President Wade succeeds in changing the constitution so he can run for a third term next February anything can happen.