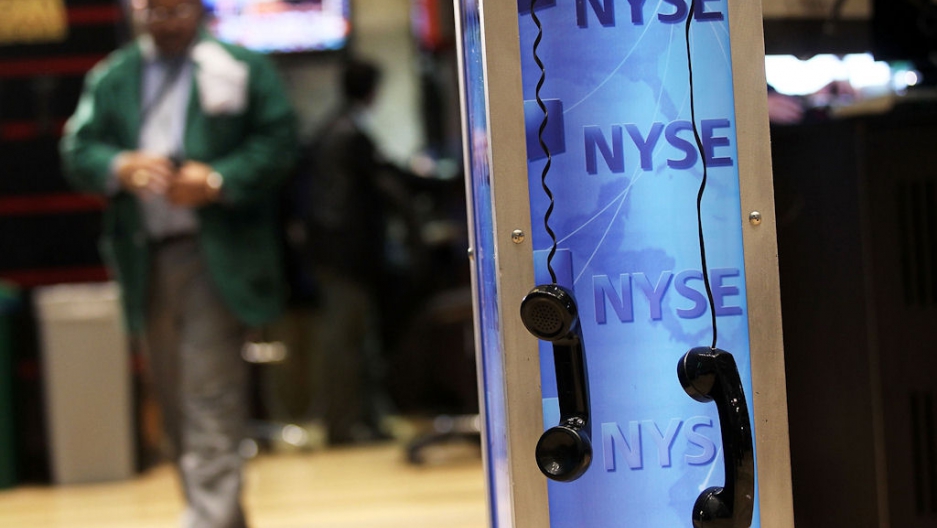 Traders work on the floor of the New York Stock Exchange before the close on June 15, 2011 in New York City.
Credit: Spencer Platt
Share

BERLIN, Germany — Let’s say Greece declared tomorrow that it was bust. The government took a look at the estimated $495 billion it owes to banks, other institutional investors and foreign governments and decided it simply couldn’t pay.

Who would actually lose their money? The answer, not surprisingly, is complicated.

Much of the focus has been on the debt owned by European banks and fear that a Greek default could spark a “contagion” — in which banks losing money owed by Greece would cut back their lending, causing the financial system to seize up as it did in 2008 after the collapse of Lehman Brothers.

But beyond the focus on banks, there are all kinds of pension funds and other institutional investors that hold large amounts of Greek debt. These debt holders are much harder to identify because, unlike banks, the investors don’t reveal it in annual reports and through stress tests.

The other mystery factor is credit default swaps, a derivative that creditors buy to effectively insure themselves against a default by a debtor. These are what draws the United States into the fraught euro zone web. While the United States has little direct exposure to Greek debt, it owns a lot of these CDSs on Greek debt — meaning Americans fear a Greek default for a good reason.

So who owns Greek debt?

French and German banks are the biggest foreign holders, according to last week’s “stress tests,” in which banks had to report, among other numbers, their sovereign debt holdings. French banks have more than $50 billion exposure, German banks about $34 billion.

That obviously leaves a lot unaccounted for. Greek banks own about $85 billion of the country’s debt, according to a research note from Goldman Sachs. The European Central Bank owns about $71 billion worth of Greek debt, which it began buying up more than a year ago — much of it from banks — through its Securities Market Program, to shore up investor confidence. U.S. banks don’t have much direct exposure to Greek debt, just $7.3 billion, according to CNN.

But the lurking danger is with the unknown amounts held by pension funds and insurers. Debt is held all over the place. For instance, the German state of North Rhine-Westphalia has about $311 million of Greek debt held in pension funds, according to business weekly Wirtschaftswoche.

“If you work backwards and look at Greek public debt and try to understand who owns what, you have a hole of $198 billion held by asset managers, pension funds and the like, but there is very little information on the details of those holdings,” Gilles Moec, an economist at Deutsche Bank in London, recently told the New York Times. “It’s a much bigger pot than what is actually held by banks, but we don’t know who owns how much, or in which country.”

Of those other countries, Portugal could be next to default if Greece fails.

So who owns Portuguese debt?

The same European banks would hit by a Portuguese default, the stress tests show.

So what about Italy?

Italy is the big kahuna in the debt crisis. It is Europe’s third largest economy. It owes $2.2 trillion, or 120 percent of its GDP, making it one of the most indebted nations on Earth. Worse, much of its debt is coming to maturity soon — $500 billion in the next three years. About half the total is held domestically but that still leaves huge amounts owned by banks around the world.

French banks are exposed to Italian debt to the staggering tune of $393 billion, German banks of $162 billion. The stress tests show:

British banks, who don’t have a lot of Greek or Portuguese debt, would be heavily affected by an Italian default. They have $77 billion in Italian debt, according to the Financial Times.

So what about credit default swaps?

As Stefan Homburg, director of the Institute for Public Finance at Hannover’s Leibniz University, explains: “The simple answer is, there is no easy way to say how exposed banks are, because in order to find out the risk expositions, you have to know the respective [credit default swap] positions.”

Credit default swaps, which banks buy to offset their risk, are a murky area that banks and insurance companies don't have to report on in detail. However it is clear that they make U.S. institutions vulnerable.

“The immediate problem is that with a lot of the bank debt … they’ve bought insurance for this debt and a lot of the insurance is from American companies. If the debt was defaulted … it would be a hit on the American insurance industry, so there’d be that knock-on effect,” said Bruce Stokes, senior transatlantic fellow at the German Marshall Fund of the United States.

Unfortunately, the market for CDSs is notoriously opaque. They are known as “over the counter” securities, meaning they can be bought and sold without anyone having to declare much information. Kash Mansori, an economist who writes the respected blog The Street Light, recently wrote that there were two serious concerns for the United States:

“First, I fear that this may have the potential consequence of exacerbating the flight to safety that will happen in the event of Greece's default; if you have no idea who is really going to be on the hook and ultimately liable for CDS payments, your best strategy may be to trust no one.

“Second, I wonder if there's a public relations disaster just lying in wait for the big US banks. After all, how will you feel (assuming you don't work on Wall Street) when you read the headline that Big Bank X lost money because it sold billions of dollars of credit default insurance while it was on taxpayer life-support? Rightly or wrongly, I'm guessing that Big Bank X will not be very popular for a while.”