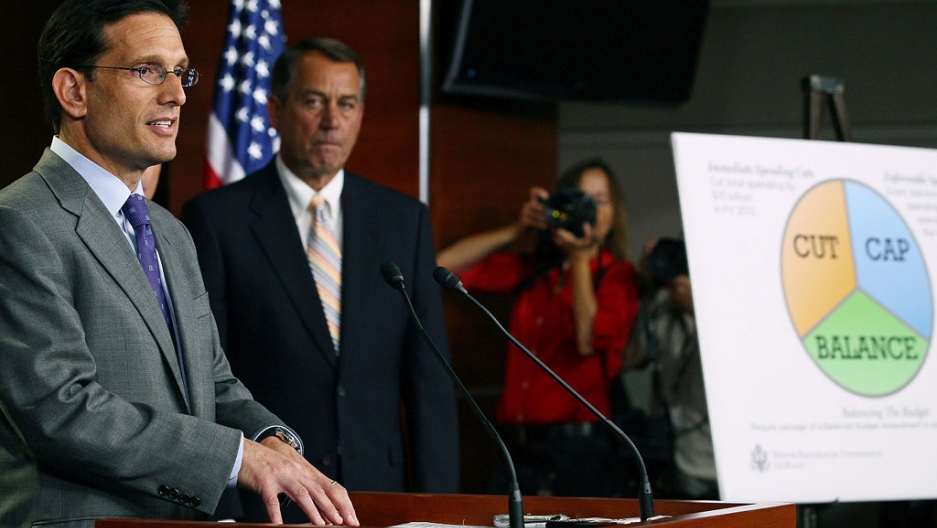 As we've known for months now, lawmakers in Washington D.C. will need to lift the debt ceiling by Aug. 2. If not, the United States — and the world for that matter — could experience economic Armageddon, according to President Barack Obama, Federal Reserve Chairman Ben Bernanke (a man not prone to hyperbole) and many others.

As that deadline approaches and politicians continue to squabble, the stakes are higher than ever. Standard & Poor's – whose top ratings on U.S. credit saves the country many billions in borrowing costs — has lost patience with Washington. On July 14, the agency warned that in addition to boosting the debt ceiling, it wants to see an end to the "political stalemate" over America's $14.3 trillion debt. "[If] Congress and the Administration have not achieved a credible solution to the rising U.S. government debt burden and are not likely to achieve one in the foreseeable future," S&P said it could take the unprecedented step of downgrading the country's creditworthiness.

With only days remaining to cobble together a compromise, write it into law and rush it through Congress, the pressure is on.

To get ideas on how to solve the debt standoff, GlobalPost turned to Stuart Diamond, one of the world’s leading negotiators. Diamond teaches the most popular class in the prestigious Wharton MBA program, and he’s the author of Getting More, a New York Times bestselling negotiations book. His techniques have helped solve the 2008 Hollywood writer’s strike, earn companies billions of dollars, and coax four-year-olds to willingly brush their teeth and go to bed.

So they might even work with Congress. (The interview has been edited and condensed by GlobalPost.)

GlobalPost: Obama’s negotiating style has been similar to the one he deployed in the healthcare reform debate: delegate the deal-making to others, and jump in at the last minute when things aren’t going well. Is this smart?

Diamond: It certainly gives him the chance to be perceived as saving the day, but if he's capable of saving a process before it becomes a crisis, he should be in there earlier. Why wait until things are at an extreme, when parties are mad at each other, and therefore not cooperative, before jumping in and trying to save the crisis?

The best approach is to have a process from the beginning, something that's calm, collaborative, structured, and reasonable. The two parties have already agreed about a trillion dollars in savings, if what I read in the newspaper is correct. Using what they agree on as a foundation to improve, rather than focusing on disagreements, is a good start.

Conservative Republicans have succeeded in blaming the debt on runaway spending by President Obama. But according to an analysis by the Washington Post, that’s not true. Half of the debt was caused by recessions and by tax cuts – mainly enacted under President Bush. Another $1.3 trillion came from the unfunded Iraq and Afghanistan wars. Obama’s stimulus — a favorite target of Republicans — added just $719 billion. So the Washington Post attributed $7 trillion of the debt to Bush, and only $1.7 trillion to Obama (the rest came from elsewhere). What would you advise Obama to do with this information?

Diamond: I would advise Obama to state the information, and then to say it was incapable and ineffective people who made those decisions in the past, and smart, effective people who can figure out what we should do now. Conflict is about the past. Building profit and opportunity are about the future. Whoever's at fault for the past is irrelevant. We face a big deadline, on which the economy depends, and we have a lot of rebuilding to do. Any moment we spend arguing over the past is wasted, when we could be articulating and developing good ideas.

In recent weeks, Tea Party Republicans have been standing in the way of a deal. Some appear untethered from reality — they think that failing to raise the debt ceiling won’t actually be destructive. So what should President Obama do? And in general what do you do when you’re negotiating with a group with a strongly held position that could be catastrophic?

Diamond: Congress and the president need an incremental solution. The president’s $4 trillion proposal and the Republican’s $5 trillion proposal are just not productive or realistic. When parties are far apart, they can't bring themselves to make big steps. Each side's position seems extreme to the other, so no deal is possible in the current climate. The hardest thing for adults to learn is to be incremental. When there's a lot of risk, you need to take much smaller steps.

The first thing they've got do is postpone the August 2nd deadline. Studies show that conflict arises and the quality of a deal goes down close to a deadline.

The next thing they need to do is move slowly toward each other. There's nothing wrong with throwing the other party a bone. Give the Republicans something, even if they're being extreme, and say, “let's postpone this and come back another day.”

Obama also needs to find friends on the other side, and there are some, who can talk some sense into those who are extreme, or exclude them if they can't.

On Tuesday, House Republicans took up a bill they call Cut, Cap and Balance. It would cap federal spending at 18 percent of Gross Domestic Product — the U.S. last spent less than that in 1966 according to the National Journal. It would also require a two-thirds supermajority in Congress to pass tax increases, and it would dramatically change how the government operates. Even conservative Democrats like Steny Hoyer D-MD regard the bill as unrealistic.

In other words, as the clock ticks toward the deadline, the House is occupying itself with a bill largely regarded as a distraction, or as a step away from compromise — and it won’t pass the Senate. The White House has called it “duck, dodge and dismantle.” Is such derision the right approach? How should the Democrats handle this?

Diamond: The last thing you want to do is start to insult the other side, which they continue to do. How can they possibly reach an agreement when they're insulting each other?

Producing extreme proposals just to look good to your constituents doesn't get deals done. It's just a waste of time, and proves the point that closer to a deadline, the quality of ideas diminishes. They need a calm commission to take some months to deal with this very complicated issue, and embrace ideas from the whole country.

There’s already been a commission, and it was largely ignored. The feeling is that because the two sides disagree so much, and because they’ve tarred one another with such vitriol, the only way to come to agreement is under a crisis situation like the current one.

Diamond: The problem is you've basically got the wrong people negotiating. Their success depends on who's on the committee and what structure they have. There are plenty of people who are experts in this kind of thing. They need to be empowered — just like the government did after the Challenger accident, after 9/11, and after nuclear accidents. Experts can follow the advice of the Government Accountability Office, which comes up with recommendations on how to cut waste and make the government more efficient all the time.

The challenge for the Tea Party Republicans appears to be that they came to office promising to enact policy that simply isn’t realistic — policy such as tax and spending cuts, at a time when many Americans are retiring, placing an additional burden on the government. Now comes the moment of truth when their principles are being tested — but if they stick with their stated goals the country will get hurt. House Majority leader Eric Cantor is the embodiment of this quandary. Last week, he stood in the way of a deal the House Speaker John Boehner backed. How should President Obama and Speaker Boehner deal with him?

Diamond: The way to deal with Cantor is not to deal with him. The president and Boehner both understand what needs to be done, which is to move toward an agreement that involves both sides. They need to be adding Republicans and Democrats one by one — in other words, they need to deal with everybody else.

If Cantor is going to be difficult, they should just stop dealing with him. They should spend their energy on people that they can deal with. Eventually Cantor will either come around, or be excluded.

Last Wednesday, in a meeting with Cantor, President Obama walked out of the room before the meeting was over. Is this an effective technique?

Diamond: It is a terribly ineffective technique. When you walk out of a room, you worsen the situation by telling the other party that you don't value them enough to give them the time of day. That prevents people from listening, and does not produce good ideas. What he should have said is, “I think we're going to take a break now, and try to figure out what we're going to do."

Visit Stuart Diamond's website to read about his book, Getting More.