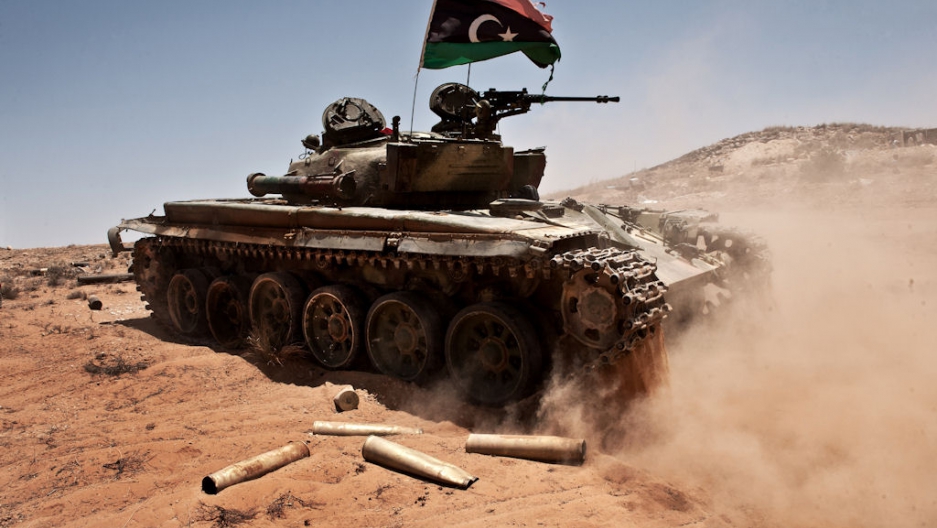 A rebel tank moves onto a ridge overlooking Gualish, 30 miles southwest of Tripoli, during heaving fighting on July 6, 2011, the first day of the NATO-backed push on the Libyan capital.
Credit: Colin Summers
Share

BRUSSELS, Belgium — NATO Secretary General Anders Fogh Rasmussen can’t be blamed for looking weary after a late afternoon meeting with the 27 European Union foreign ministers. He’s been traveling almost constantly while overseeing the alliance’s first-ever conduct of two wars simultaneously, neither of which has lent itself to upbeat assessments recently. But the Dane isn’t daunted.

While Afghanistan was always going to be a long haul, many inside and outside of the alliance believed crushing the military capacity of Libyan leader Muammar Gaddafi could have been done in short order. That group did not include the secretary general.

“I’m not surprised,” he said, of the fact that four months of air bombardment haven’t yet vanquished Gaddafi. “We knew in advance that the Gaddafi regime had gathered quite some assets and also a lot of money, so they have a lot of resources.”

He also downplayed reports of internal strife among the NATO allies and dwindling supplies in their storehouses. “I’m not concerned” on either count, said Rasmussen in an interview with GlobalPost on Monday. “There is a very strong commitment within the alliance and among our partners that we will stay committed, we will see this through to a successful end. Partners and allies have also provided the necessary assets and resources to continue the operation.”

Libya’s opposition forces said Monday that they had retaken parts of Brega, a key strategic city. Rasmussen was unfazed by the suggestion that, by launching airstrikes in areas the rebels are trying to win, NATO is not a neutral actor. “Of course NATO takes sides,” Rasmussen acknowledged, “because we are on the side of the Libyan people. We are there to protect the Libyan people against attacks.”

But last week, at almost the precise moment that opposition leaders from Libya’s Transitional National Council stood for a photo op with Rasmussen at NATO headquarters, Human Rights Watch issued a statement blaming the council for perpetuating attacks on villagers.

In an appearance a few hours later with European Commission President Jose Manuel Barroso, council leader Mahmoud Jibril acknowledged there had been a “few incidents” in the early days of the revolution. “The TNC is investigating those cases and is against any violations of human rights,” Jibril said. “Those who are responsible for that will be brought to justice.”

But Rasmussen said for the alliance, there won’t be further inquiry on that question, as long as no attacks on civilians are witnessed by NATO. “That’s not part of our mandate, to control the TNC,” he said. “Our mandate is to protect civilians against attack and we have done so quite successfully until now. We have considerably degraded Gaddafi’s war machine and by that we have prevented a massacre on the Libyan people. We have saved numerous lives.”