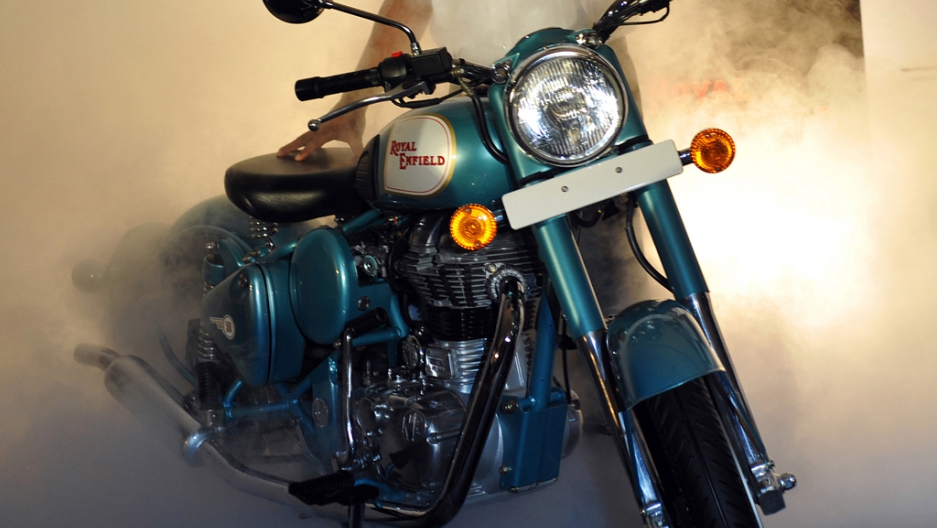 NEW DELHI, India — On a sweltering July afternoon, bikers roar around the tight circle drive of the Ashok Country Resort outside New Delhi. The signature thump of India's most beloved motorcycle — the single-cylinder, Royal Enfield Bullet — multiplies, escalating to a roar.

Across the hotel compound, other riders, still mud-spattered from their journey, tinker with bikes that have just returned from the 1,500-mile "Himalayan Odyssey."

The Odyssey, organized by Royal Enfield Motorcycles, goes from Delhi to a high mountain pass called Khardung La in the Ladakh region, and back again. Riders from all over India participate in the legendary ride, which started in 2003.

"It was positively the greatest experience of my life," said 27-year-old Khurum, a business consultant who hails from Pune, Maharashtra, having just completed the ride.

"I had a smaller bike earlier, but I always wanted to pick up an Enfield. ... When you have that kind of power between your legs, it's a different feeling."

Royal Enfield, born in Britain and transplanted to Chennai, is the world's oldest motorcycle company. But even though its Bullet motorcycle is perhaps the most recognized and beloved brand in India, for many years the company seemed doomed to eke out an existence as a kind of curiosity. Commuters swore by the bike, but it never quite achieved mass appeal.

Then came foreign competitors like Harley-Davidson, Triumph and Ducati, revving their engines on Enfield's home turf and threatening to leave the company in the dust.

But just as Enfield's prospects might appear at their darkest, the firm may actually be poised to turn its cult following into something it has always fallen short of: commercial success.

"We're at a very, very interesting inflexion point," said Royal Enfield chief executive Venki Padmanabhan, who was named to the position in February, in an interview with GlobalPost.

"Royal Enfield, if you track it through its 100 years of history, has been like a wannabe brand. It's got appeal, and it's always on the brink of commercial success, but it never gets over the hump. ... But since 2000 Siddartha [Lal], the owner, has really grappled with the demons of the brand."

Not long ago, Royal Enfield — which once made rifle parts for the Royal Small Arms Factory in Enfield, Middlesex — sold only around 25,000 bikes a year, while the 100 cc commuter bikes of competitors like Hero Honda sold in the millions.

Considering this year customers had to wait a whopping eight months for delivery after placing an order for a new bike, it's about time.

"I'm writing on my blog: I'm making 40 percent more bikes than I did last year," Padmanabhan said. "If the waiting period's not budging, don't mistake us, we're not insensitive to it. But obviously we're not doing enough."

At the same time, the company aims to add three or four dealers a month to its present network of 180 sellers over the next three years, while boosting international sales in countries like the U.K., France, Italy, Spain and the United States. Royal Enfield sold only 2,500 bikes abroad in 2010, but wants to add another 11 markets to the 29 countries where the brand currently has a small presence by next year.

(GlobalPost in New Delhi: Mumbai blasts ahead of U.S. visit)

It's a big opportunity. India's market for two-wheelers is already huge — with buyers picking up around 12 million bikes and scooters a year. Experts forecast continued double-digit growth for years to come.

Foreign competitors like Harley and Triumph may pose a serious threat down the road, but for now Padmanabhan sees their entry as spurring demand for bigger, more stylish bikes and driving interest in motorcycling as a hobby and a lifestyle choice, rather than a cheap way to commute.

"The fact that all these big guys are coming in just means that leisure motorcycling will become a significant interest among young men," Padmanabhan said.

But is the Bullet biting off more than it can chew?

Padmanabhan says that the aggressive targets may seem sudden, but Royal Enfield has been putting the pieces in place for the better part of a decade. It started when 37-year-old Siddartha Lal — scion of the family-owned group, Eicher Motors, which owns Enfield — took the helm in 2000. Enfield had been losing money, and Lal's father, Vikram, was keen to shut it down. But Siddartha, a passionate Bullet lover, convinced Vikram to give him two years to turn the firm around — and then embarked on a crusade to reinvent the engine that had made it famous.

For decades, Royal Enfield's 350 cc and 500 cc Bullet was the only "big bike" available. Its classic British design — framed around a four-speed, single-cylinder, iron-barreled engine that harks back to the heyday of BSA, Norton and Triumph — remained essentially unchanged for 50 years. Fans forged a cult-like following that endured even as faster, cheaper and more reliable Japanese designs stormed onto the scene.

But that classic character was at once Enfield's greatest strength and its biggest weakness: It ensured that the Bullet attained an iconic status, like Levi's 501s or Harley-Davidson's Sportster, yet it also guaranteed that it would never sell in big enough volumes for commercial success.

The 50-year-old engine also had technical difficulties, according to Padmanabhan. "The fact was it was not reliable. It seized. It leaked," he said.

In 2007, however, Royal Enfield unveiled a new design with an integrated gearbox and fuel injection. To the dismay of hardcore fans, the company also moved the gears and brake — which had always been "backwards" — so that the gear pedal was now on the conventional left-hand side of the bike.

Designers worked long hours to make sure that the new engine still looked old, so that when the company launched the Bullet Classic 500 in 2009, it would appeal to the faithful as well as new converts. But there was one crucial problem: You can make a modern engine look old, but you can't make it sound old. Aluminum just won't thump like cast-iron.

(GlobalPost in New Delhi: Wikipedia to the rescue)

A quick internet scan suggests that the reviews were mixed. Some called the muffling of the classic thump "blasphemy" and "complete suicide" for the brand. Others said the modern features are a good trade.

And sales numbers for the Classic — a retro-looking Bullet with the new engine and electronic fuel injection — suggest that even if Enfield has lost a few die-hards, it's gaining a foothold among young riders looking for a stylish bike that spends as much time on the road as it does at the mechanic.

Perhaps it's time for Royal Enfield to finally live up to the swagger of its old-school slogan: "Made like a gun ... goes like a Bullet."