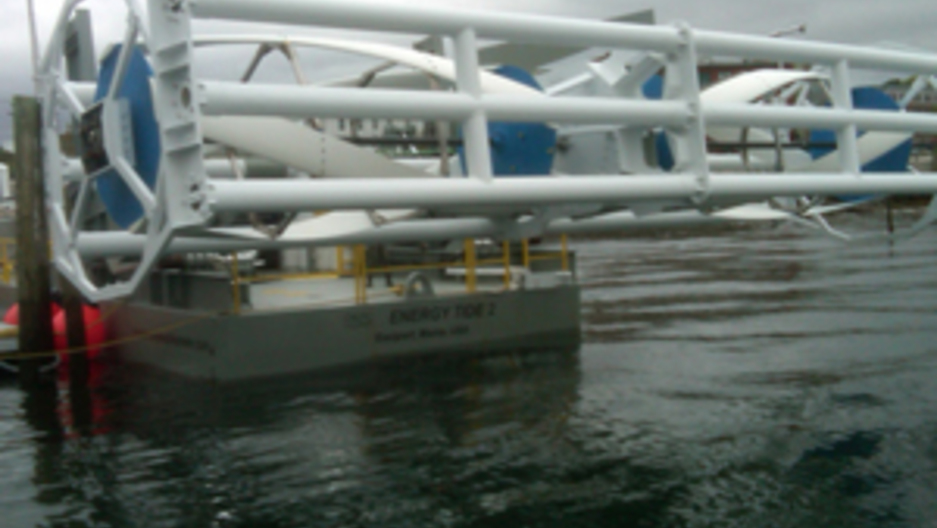 The boat the Energy Tide 2 uses a steam-boat-like turbine to harness the tides potential for electricity. (Photo by Jeff Young)

Story by Jeff Young for Living on Earth. Listen to audio above for full report.

The motion of the rise and fall of the tides carries enormous potential energy to the coasts twice a day, like clockwork. However, harnessing that power has long proved problematic.

At the Bay of Fundy -- near the border of Maine and Canada -- a group of energy entrepreneurs are using a barge-like craft with a huge turbine generator unit to harness power from the Bay's tides. The craft is called the Energy Tide 2, and it's the creation of Chris Sauer.

"As the tidal currents come it starts to generate electricity," Sauer explained to Living on Earth. "And then of course the tide reverses and comes the other way and does same thing. On an average basis we’re generating about 18 to 20 hours a day."

The Bay of Fundy is home to the world's highest tides -- up to 50 feet -- which can provide an enormous amount of enery, and makes it very attractive to those wishing to harness energy from tides. Dating back to the era of Franklin Roosevelt, many have tried tidal projects at the Bay without success, but they keep coming back.

Mark Savory is the vice president of Nova Scotia Power, one of three companies in the area. Savory recalls how their turbine unit succumbed to the powerful tides and was destroyed: "We lost the blades off of it. It's like we just purely overloaded it. So other than the fact that there's no blades on it, it looks almost like the day we put it in."

Savory isn't giving up. Nova Scotia Power estimates it might be able to get two gigawatts of electricity from the tides at the Bay of Fundy, about 15 percent of the province's annual power consumption.

Dr. Robert Thresher, a research fellow at the National Renewable Energy Laboratory in Colorado, has worked with wind power since its early development in the 1970s. Now he's researching tidal power and says that, while the two are quite similar, tide power could develop much faster.

"In my opinion, the tidal power stands on the shoulders of wind power," Thresher asserts. "I predict that we'll start to see some tidal power on grid within two or three years, and that it'll grow over next five to 10 years to become basically a practical technology."

Thresher's rough guess is that tidal power and other forms of ocean energy could eventually provide five to 10 percent of U.S. electricity demand. But that will largely depend on how much the government is willing to do to help make it happen.