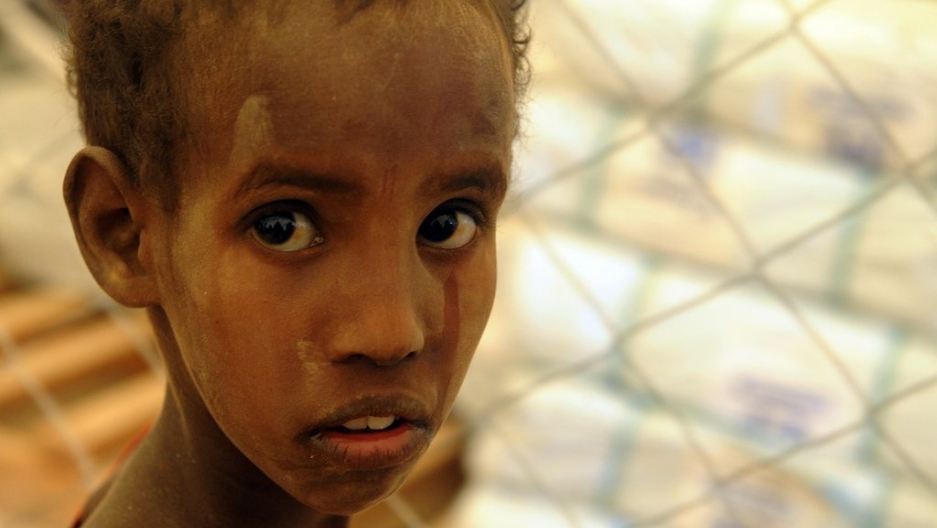 This young Somali refugee has just arrived at Dadaab refugee camp on July 10, 2011 in northern Kenya, where he waits for registration into the safe haven. He joins thousands of other refugees seeking water and aid at Dadaab's already overcrowded facilities.
Credit: Simon Maina
Share

NAIROBI, Kenya — East Africa's worst drought in 60 years is putting 11 million lives at risk, many of them in war-torn Somalia, where thousands of hungry families are making the dangerous trek across parched, violent territory to the promise of safety and food in Kenya.

Aid agencies warn the drought is regional — affecting Kenya, Ethiopia and Somalia — and the hunger that now stalks the land may become famine.

Most of the Somali refugees arrive at Dadaab, a sprawling complex of overcrowded camps in northeastern Kenya built in 1991 for 90,000 people. Today it is home to more than four times that number. It is the world’s largest refugee camp and one of the fastest growing human settlements on the planet.

But it is not large enough for the new refugees, who are currently arriving at a rate as high as 1,000 per day.

Bowing to international pressure, Kenya’s government has agreed to open a new refugee camp to house some of those thousands of hungry, desperate and bedraggled victims of Somalia’s decades-long war who cross into Kenya. The exodus has accelerated because of the drought that is pushing their already marginal existence to the edge of oblivion.

A few miles away from Dadaab’s dusty squalor is Ifo-II, a new $20 million facility for refugees built by the U.N. in 2010. But a year later the gleaming new camp remains empty. The lines of brick houses with tin roofs, deep wells for fresh water, latrines and health facilities are all empty and unused.

Kenya blocked opening the camp, complaining that the new facility would encourage more refugees whose arrival could provide cover for Somalia’s Islamist militants who have threatened Kenya in the past, such as the Al Shabaab insurgents. Kenya has suffered several terrorist bombings.

“We have security concerns that Al Shabaab could be coming into our country under the guise of refugees,” said Kenya’s security minister George Saitoti earlier this week.

But on Thursday Prime Minister Raila Odinga caved into the pressure from aid agencies and the U.N. to open Ifo-II. “Although we consider our own security, we cannot turn away refugees,” he said.

The new camp will help to decongest Dadaab, but it amounts to little more than a sticking a bandaid on a gaping wound as refugees continue to flood across the border joining communities that are themselves suffering from drought-created food shortages.

Two consecutive poor rainy seasons has resulted in “one of the driest years since 1950/51 in many pastoral zones,” according to the U.S.-funded Famine Early Warning System Network (Fewsnet). The drought has compounded the problems created by more than 20 years of war in Somalia.

“The human cost of this crisis is catastrophic. U.N. agencies have asked for $1.6 billion dollars to pay for essential life-saving programs in the region, but have only received half that amount,” Ban said. “Our priority is to stop the suffering now.”

Civilians fleeing conflict and drought have made long, often deadly, walks southwards from Somalia in search of food and safety.

“Women and children have made the most incredible journeys, walking for weeks through the desert and braving hunger and attacks by armed robbers and wild animals, to get to the camps in Kenya,” said Joost van de Lest, head of Oxfam in Kenya.

“The numbers arriving are overwhelming and basic services are insufficient,” warned Nick Guttman, head of the humanitarian division at charity Christian Aid.

“Most people have been walking for weeks on end and are in a very poor state of health. Many only make the very difficult and arduous journey to Dadaab when their last animals have died and they have no other choice,” Guttman said after visiting the area this week.

The U.N. High Commissioner for Refugees, Antonio Guterres, called the conflict and drought “the worst humanitarian crisis in the world today.”

In Somalia itself the International Committee of the Red Cross (ICRC) says malnutrition levels are currently the highest in the world.

“The population is no longer able to cope with harsh climate conditions, such as the current drought, while at the same time struggling to survive armed conflict and other violence,” said Andrea Heath, ICRC economic security coordinator.

The combination of conflict forcing people from their homes while drought kills off livestock and dries up the land has caused suffering for thousands. To make matters worse, Al Shabaab, Somalia's ruthless Al Qaeda-linked rebel group, has restricted Western humanitarian access in recent years and food prices have shot up.

In Somalia the cost of sorghum, a staple grain, has risen by 240 percent over the last year.

So dire is the situation that Al Shabaab said it will lift restrictions imposed on humanitarian activities in areas it controls, although aid agencies are wary of returning. The UN’s World Food Programme is considering a return to Al Shabaab-controlled territory after an 18-month absence.

“WFP withdrew from areas under Al Shabaab control … because of threats to the lives of our staff and the imposition of unacceptable operating conditions, including the imposition of informal taxes, and a demand that no female staff work for us there,” the agency said in a statement.

WFP added that it would “explore every possibility to return” with the necessary security guarantees.

This week the U.N. children’s agency, UNICEF, airlifted 5 tons of food and medicine into the Al Shabaab-controlled town of Baidoa. “We are ready to work anywhere in Somalia," said UNICEF Somalia head Rozanne Chorlton, "provided we get unhindered access to reach the most vulnerable children in need.”

(More from GlobalPost in Somalia: Life in Hell)