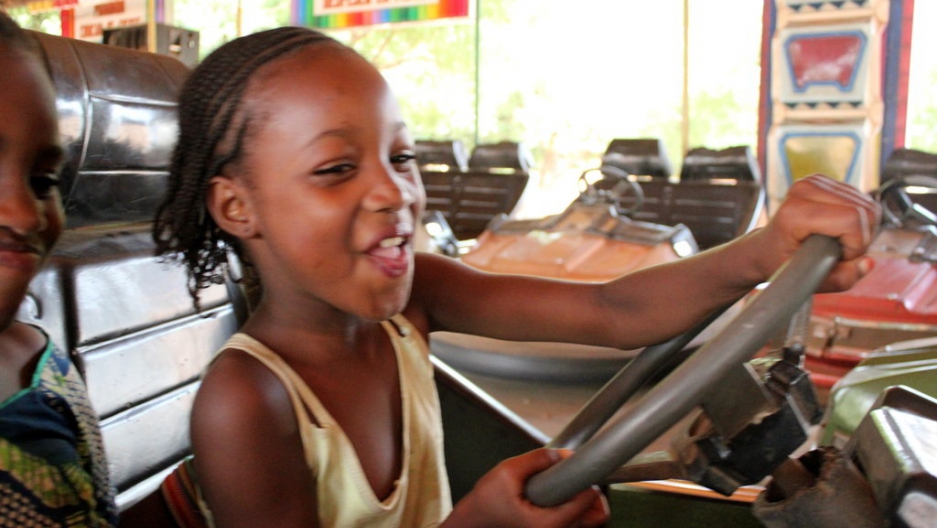 A little girl has a blast on the bumper cars at Manuel Marco's Parko de Corinhog do Choque in Guinea-Bissau.
Credit: Julia Ritchey
Share

DAKAR, Senegal — On Africa’s westernmost tip, a caterpillar coaster swoops past a pirate ship then a space shuttle labeled “Star Warld,” before crossing the gaze of Galdalf, a porcelain wizard clutching a Hamlet skull and a dartboard. Children scream.

“Get on,” insists a surly carnival operator, hissing at two reluctant riders before mocking them: “Vous avez peur? You scared?” He shakes his head, pelts his cigarette to the ground, then hops into the caterpillar train: Off we go. In this, Dakar’s largest amusement park, even the employees ride the thrills.

At least eight theme parks have opened or are scheduled to open in West Africa alone since 2000. The region’s roller coaster tycoons — some foreign, many local — brave one of the world’s least friendly business environments.

Power outages in Dakar last half the day; Nigeria’s last longer. Most citizens of either country can’t earn enough in 24 hours to ride Magic Land’s bumper cars for even 15 minutes.

“More and more, Senegalese parents bring their children here to ride the attractions and play,” said Abdoulaye Ndiaye, security guard at Magic Land. “It’s super. We have given them a place to relax in a city where we don’t have a lot of space to play.”

However discouraging West Africa’s economics are, its demographics make it ripe for a theme park bonanza. Half the continent is under 20. By 2050, one in every fifth person on the planet will be a sub-Saharan African, according to the United Nations. Hundreds of millions of those will be teenagers with no place to go on a date.

South Africa has led the way in Africa's amusement parks with elaborate parks, home to hair-raising roller coasters, in Johannesburg and Cape Town.

The continent’s kid-surplus hasn’t totally escaped the notice of the global amusement park industry. In 2009, Six Flags announced it would open its third non-American park in Nigeria.

Two years later, Six Flags Nigeria has yet to break ground. Local variants, however, are filling its void — like Rosella’s Family Sports and Amusement Parks.

The Lagos-area park describes itself as "the actualization and physical manifestation of the great vision and commission by the Almighty God in 1985 to Prince Abraham Oluwatoyin Ololade (then Oluwatoyin Barber) to establish Amusement Parks where children of God will regularly seek succor against stress, boredom, and grief, seek rest, relaxation, and quiet time with God and most importantly, to Glorify God — a place with God.”

Manuel Marco, a 64-year-old Spaniard running Guinea-Bissau’s only amusement park, describes his operation as a set of 23 bumper cars – modest, but popular.

“There were no amusement parks here, nothing,” he said. “I asked myself, why not? Why don’t we have anything?”

“This is a country with a lot of problems,” his assistant Nelson Balde added. “We have so many children who want to steal, just to have something to do. I brought this here for them.”

Dwarfing every other park in the region is Heritage City, a 25,000-acre nature reserve and theme park planned outside Abuja, Nigeria. “Africa’s First and Only African History Theme Park” bills itself as an Epcot of Africa’s pre-slavery renaissance period, a place where kids will tour replicas of Timbuktu and other medieval African kingdoms.