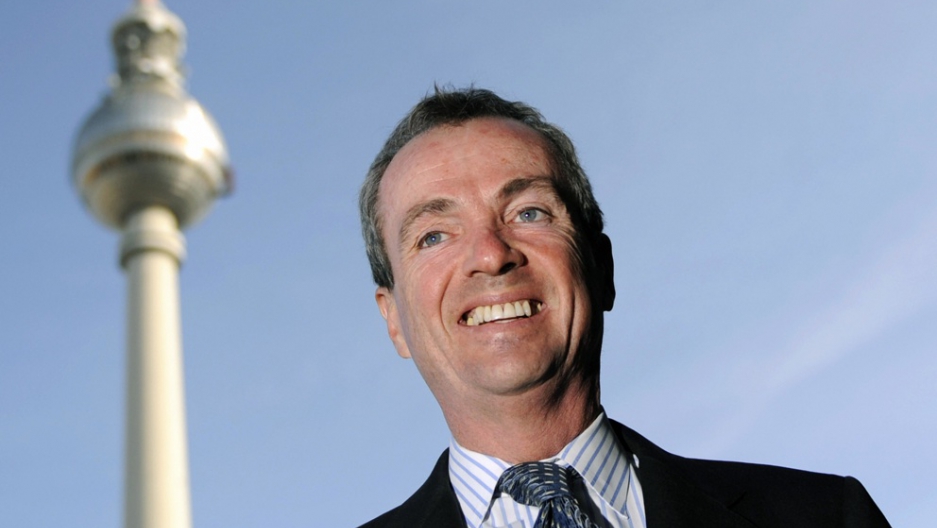 BERLIN, Germany — The ambassador’s voice is hoarse from cheering on the U.S. women’s soccer team against Brazil in the World Cup the night before. “I’ve been to all games,” he says proudly.

The 54-year-old former Goldman Sachs banker served as Democratic Party Finance Chairman from 2006 to 2009 before coming to Berlin nearly two years ago.

He landed in Berlin just as Europe's largest economy was emerging from recession, but was confronting the euro zone debt crisis.

Murphy says he's confident that Germany’s leadership will do whatever it takes to keep the European project alive. GlobalPost sat down with Murphy at the U.S. Embassy in Berlin. (The interview was condensed and edited.)

GlobalPost: How concerned are about the European debt crisis?

Murphy: We are concerned in the sense that we look at this very carefully, and we pay close attention to it because we know how interconnected the world is. I think itʼs in the category of sharing best practices: What worked [for the U.S.]? What didn’t work? What more could you do? So we talk [with Germany's leaders] all the time.

These are complicated challenges. They are solvable. There is no question, a strong European Union, a strong and stable euro zone, are good for Europe and good for the U.S. as well.

Many Germans oppose bailing out their neighbors. Do you see European leaders shielding the broader European project from the political fallout of any bailouts?

The European project has to be maintained and it will be maintained. Iʼm completely confident in that. Sometimes leaders have to lead by leaning into the wind, leaning into public sentiment. I donʼt blame the public for being frustrated, but the euro has been good, first and foremost, for big economies like Germany. Its leadership knows that. It will do whatever it takes to keep that project intact and alive.

Germanyʼs economy has made quite a successful turnaround since the Great Recession. What can the German example teach America?

There are two lessons that Germany can teach. One is that it still manufactures stuff that the world wants to buy and as a big percentage of its economy. That number has gone too far down in our economy. We manufacture less in our economy than we used to. We have to get that back up. The second thing I am a big fan of is “Kurzarbeit” [a scheme where a workerʼs total number of hours each week are reduced to avoid layoffs, with the government covering part of salaries]. I think it's a great model.

In March Germany proved to be a quite unpredictable ally when it refused to support NATOʼs air campaign in Libya.

When you've got an ally as close as Germany, the question is not only how often do you see things the same way, but what do you do if you donʼt see things exactly in the same way? The sign of a very close, meaningful, deep, and decades-long relationship like the one we have with Germany, even in Libya, is when we might see a vote in a different light.

The question is what do you do to get back to being whole again? Germany has staffed up on AWACS missions in Afghanistan. They put a couple of ships back in a mission in the Mediterranean, and they have talked about a major role in post Gaddafi Libya.

So when you look back at it from 5 or 3 years from now and you look at the entirety of the Libya experience, you will see Germany playing a very meaningful role directly in Libya, and indirectly through its other actions.

Germany abstained from the U.N. Security Council vote on Libya, together with Russia and Germany. It voted in line with the BRIC countries. Does that mean Germany has more a trade policy than a real foreign policy at the moment?

I donʼt see it that way. I think you can have both. Germany has a monster foreign trade element to it. Itʼs the second largest exporting country in the world..so it has deep trading relationships, first and foremost with Europe and the United States. Trade with China and India may be rising. Its biggest trading partners are here in Europe and the United States and thatʼs very important for both of us.

So the answer is yes it can have both. It also has a very well articulated foreign policy and in many cases if not most cases a foreign policy that is very consistent with our objectives as well.

So you are not worried that as it increases its trade relations with the BRIC countries, Germany will pursue a “go-it-alone” approach?

There is no zero-sum game here. The commentary suggests often because you are [boosting emerging market trading] that you can no longer have the same relationship with America and Europe. I think the reality is you have to be able to do both.

How do you think Germans perceive President Obama? Itʼs nearly three years since he spoke in Berlin and received a heroʼs welcome.

They perceive him very well. It makes our lives easier. He is very well regarded here and with good reason. He is a man among other things who stands for engagement and doing things together. No one country can solve all the problems in the world no matter how mighty and big that one country might be. Germans typically want to hear that we are in this together, which is why the burden sharing point is so important. We canʼt have it both ways. You canʼt want engagement on the one hand and not be prepared to pay the price for that engagement.