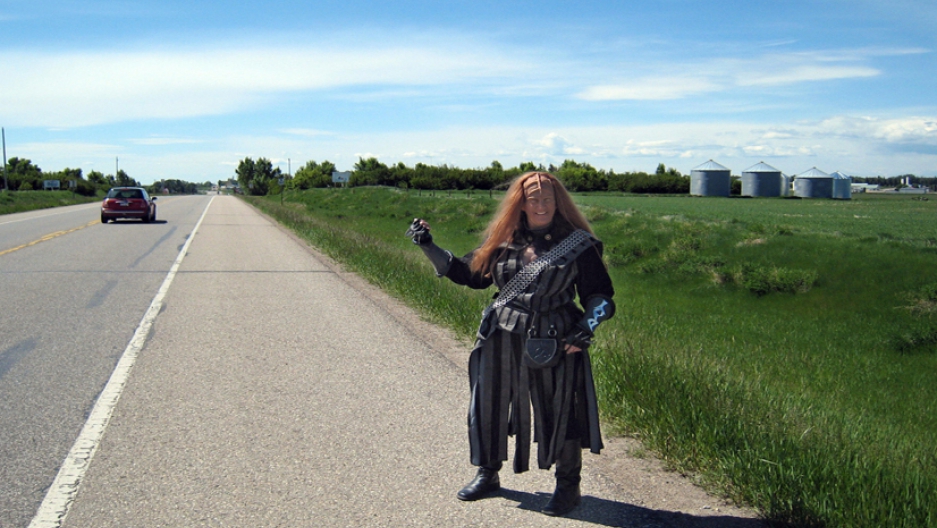 Yet Vulcan, Alberta (pop. 1,900) has become something of a mecca for diehard Star Trek fans.

Facing the prospect of being sucked into an economic black hole in the early 1990s, the one-horse town in Canada’s Wild West decided to cash in on its otherworldly name — with surreal results.

From around the planet they now come to pay annual homage to Trekkie relics such as the pair of rather fusty-looking Spock ears resting in a glass display in the town’s principal place of worship — a white space station docked incongruously next to a long, lonely highway.

The ear tips are on loan from Leonard Nimoy, who played Spock in the cult TV series. Hovering nearby, an enthusiastic fan claims they caused the actor so much pain that he once expressed a readiness to have his ears surgically pointed. "That’s how far he was prepared to go!" said local resident Qel’Iv Satir eyes widening earnestly below a ridged latex forehead. He’s a Klingon — hence the name and the get-up.

The town's annual festival includes a number of kooky events, such as a street parade featuring an oddball procession of cowboys on horseback, farmers on tractors, kilt-wearing bagpipers and fez-head Shriners in tiny cars. The sci-fi connection isn’t at first apparent, but there are a few pointy ears and green faces in the mix. In any case, people seem to be enjoying themselves too much to care. Not least the swarms of kids swooping on the sweets being thrown onto the pavement.

There’s no shortage of space creatures in town for the festival. But, not all fans conform to type. Take, for instance, the three ladies in polka dot headscarves and old-fashioned farming garb watching the parade. Time travelers? No. It turns out they are Hutterites, members of an Anabaptist sect originating in 16th-century Europe, whose members fled persecution for the relative peace of the North American prairies.

"We have come here to see Spock," said one in a distinctly Teutonic accent (Hutterites still speak their old Tyrolean dialect). Appearances can be deceptive —the three women may look like they live in a time warp, but are in fact thoroughly sci-fi in outlook. For the past five years or so, their entire colony, in the nearby village of Milo, has been devouring old episodes of Star Trek. Indeed, the town center is dotted with clusters of Hutterites seeking out some Trekkie buzz.

A group of Klingons walk into town along the main rail line through Vulcan. (Michael Comte/AFP/Getty Images)

Actor Garrett Wang, who played Ensign Harry Kim in "Star Trek: Voyager," provides a touch of LA frisson. He seems to be constantly flitting around corners, spirited from one event to the next by women in Starfleet uniforms and knee-high boots. He inaugurates the town’s walk of fame, his handprint reproduced on the sidewalk for all eternity near the town bakery. "There really is nowhere like this in America," he said, pausing a moment before adding, "Well, maybe Roswell …"

For many fans, the festival is a mini utopia. Pam Linton, who runs a Star Trek fan club, has been coming here for 16 years. What keeps her hooked? "It's the philosophy. There’s none of the crap that goes on in real world. I wish the real world could be like Star Trek," she sighs. Her husband, Mike, appreciates the event’s DIY, egalitarian spirit, in which fans are encouraged to mingle with visiting actors. "You can always talk to the actors and even party with them after. We don’t stalk them. We talk to them like normal people."

A mural of Spock and the grain elevator in Vulcan town center. (Lorraine Mallinder/GlobalPost)

There’s a slight feeling of despondency once the main day’s events wind down. A few stragglers mooch around the town center, near stands selling Star Trek tattoos, hot dogs and secondhand books. Local youth seem to have seized control of the stage. A tuneless voice wafts through the cool, damp air. A female Klingon expresses her hope that Canadian actor William Shatner, aka Captain Kirk, will come next year.

Star Trek has saved this small town — incidentally, named after the Roman god of fire — from hitting the economic skids. Local promoter Grace Klitmoller remembers there were a lot of sceptics in the early days. Undaunted, she pressed ahead, launching events such as a Spock-related rodeo and commissioning a statue of a starship, with greetings written in English, Klingon and Vulcan, to attract visitors. Eventually, a failed bid to screen the Canadian premiere of movie Star Trek XI won the sympathies of actor Nimoy, who really put the town on the map with a visit last year.

Creating a spiritual home for sci-fi geeks in cowboy country may have initially seemed like a long shot, but in a strange way the idea makes sense. As hardcore Trekkies are keen to point out, back in the 1960s the series was originally pitched as a Western in outer space entitled "Wagon Train to the Stars." Logical, as Spock might say.