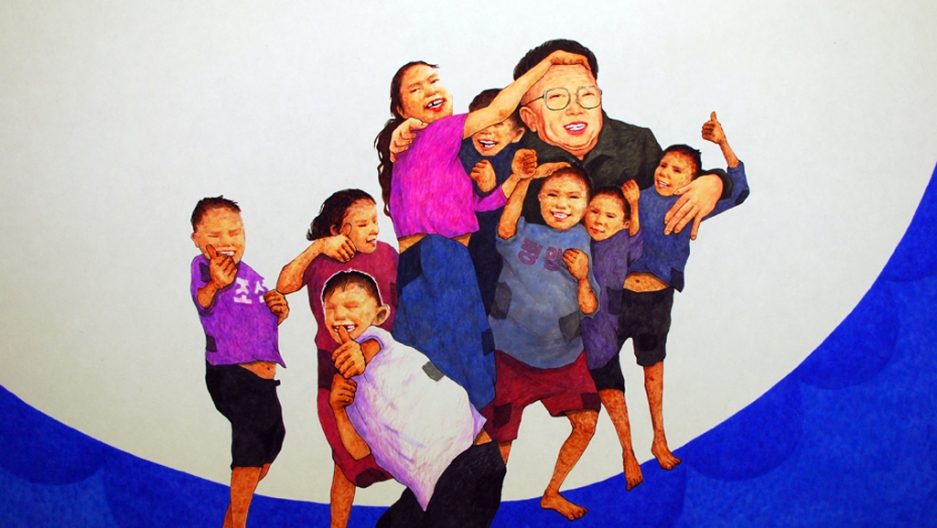 "I have to put this out there about freedom and North Korea, so I've staked my life on it," Song said.
Credit: Sebastian Strangio
Share
.incontent{ display:none; } div.leadphoto { display:none; }

SEOUL, South Korea — At first glance, it looks like a painting of the actress Marilyn Monroe, striking her iconic pose above a subway grate.

Above the ballooning dress, however, sits the face of North Korea’s “Dear Leader” Kim Jong Il, wearing his trademark dark sunglasses and grinning wildly. A group of what look like gold fish swim about the figure’s feet.

The comical work, entitled "Take Off Your Clothes!," was unveiled in Seoul earlier this year as part of “Forever Freedom,” the debut exhibition by the North Korean artist Song Byeok, who defected to the South in 2002.

Before defecting, Song cut his artistic teeth painting propaganda for Kim’s regime, turning out grinning portraits of founding father Kim Il Sung and technicolor depictions of militant workers and peasants. Since arriving in South Korea, however, he has turned his talents against the repressive regime and its diminutive leader.

Commenting on his popular Kim-Marilyn mash-up, the artist said both figures — the starlet and the Stalinist — were clearly trying to “hide something” from the people.

“My message to Kim Jong Il is stop this constant thinking and talking about war, and get some kindness in his heart and give freedom to the people,” Song said in a recent interview, pulling out another painting that showed a coiffed Kim toasting with a glass of red wine.

Read more: Is the end of Kim Jong Il North Korea's only hope?

The 42-year-old, who shares the tiny stature of many recent arrivals from the poverty-stricken North, said he started painting as a hobby, but that his talents were quickly noticed and he was recruited to work for the regime.

In a rural studio south of the capital Pyongyang, officials would present him with strict templates from Pyongyang outlining the posters’ content, which he would dutifully reproduce. Painting “outside the lines” — making personal alterations to the models — was strictly forbidden.

“You couldn’t even think of that,” he said. “Every line, every angle, it was all presented in the model. It was just copying. There was no creativity, none of the artist’s personality, nothing.”

At his small studio in suburban Seoul, Song unveiled a reproduction of a typical propaganda poster, rendered in a vivid mix of reds and browns.

It showed a stern-faced worker pointing at the viewer, shrill yellow Korean script intoning: Are you going to live as a free human, or as a slave? Let’s protect the red flag of the revolution until the very end.

“In North Korea, this is an actual slogan,” Song said of the painting. “But it could be turned back at them: are you going to live as free men or as slaves? Look at how you’re living: you’ve got no freedom of speech or activity or assembly, or anything in North Korea.”

Though often comic and cartoonish, Song’s artworks reflect his own slow disillusionment with Kim Jong Il’s regime. Like many defectors, he first began to question the status quo in the mid-1990s, when a collapse of the country’s food distribution systems coincided with a devastating famine.

In his native North Hwanghae province, Song said many people were reduced to “living skeletons.” His family survived for several years at the brink of starvation, subsisting on soup made with ground up rice husks and grass uprooted from the nearby mountains.

In the summer of 2000, Song and his father finally decided to cross into China to work for food, but during their initial crossing of the Tumen River, swollen by the summer rains, his father was washed away in the surging waters.

“I was about halfway across the river when the rope grew slack,” he said. “My father told me three times to go and leave me and then disappeared underwater.”

Song dragged himself ashore and begged for help from a group of North Korean border guards. “They refused, saying, ‘Why have you survived? You should die also,’ and they beat me up.”

After a seven-month spell in a North Korean prison camp, where he lost a finger to frostbite, Song was amnestied and successfully snuck into China. A year later, after securing a secret passage to South Korea with the help of a traveling businessman, he arrived at Seoul’s futuristic Incheon airport.

After his father’s death and his own mistreatment in prison, Song said he had become deeply disillusioned with the regime and its propaganda, and vowed to leave for the South at the first possible opportunity.

“I was educated to believe that South Korea was a sick and diseased and twisted place,” he said. “I didn’t know that the regime was this bad. I’d been painting these happy posters all this time, and I didn’t realize this evil stuff had been going on in the country.”

He added: “Until then I’d thought that our country was in a bad way because of the Americans, but when my father died, that’s when I started to think that this isn’t right.”

It’s a sentiment Song is trying to communicate through his art, infusing the North’s socialist realism with a playful absurdism that pinpoints the regime’s lies and contradictions.

He said, “When a person’s born, their first human right is freedom and every individual has their own freedom. The only country that doesn’t have any of these things in the whole world is North Korea. I want to send a clear message to the world and to the South Korean people through these works.”

As for many defectors, life in the capitalist South has been a challenge for Song. In order to fund his art, he has been forced to wash dishes and work other menial jobs, and said he is five months behind on the rent for his studio space. Many in the South — where he said there is a surprising amount of sympathy for the North — also warned he would not succeed if he painted North Korean themes.

But Song said he felt a compulsion to reflect on his own experiences and draw attention towards the situation in his homeland. In the brochure for his exhibition, Han Jin-Man, the dean of Hongik University's fine arts graduate school, wrote that Song has used his work “to become free from a nightmare that keeps repeating every night.”

Following the success of his first exhibition in January, Song says it’s possible audiences in the United States and elsewhere in the West may next get a chance to see his work up close.

“I have to put this out there about freedom and North Korea, so I’ve staked my life on it,” Song said. “I can’t miss this chance.”