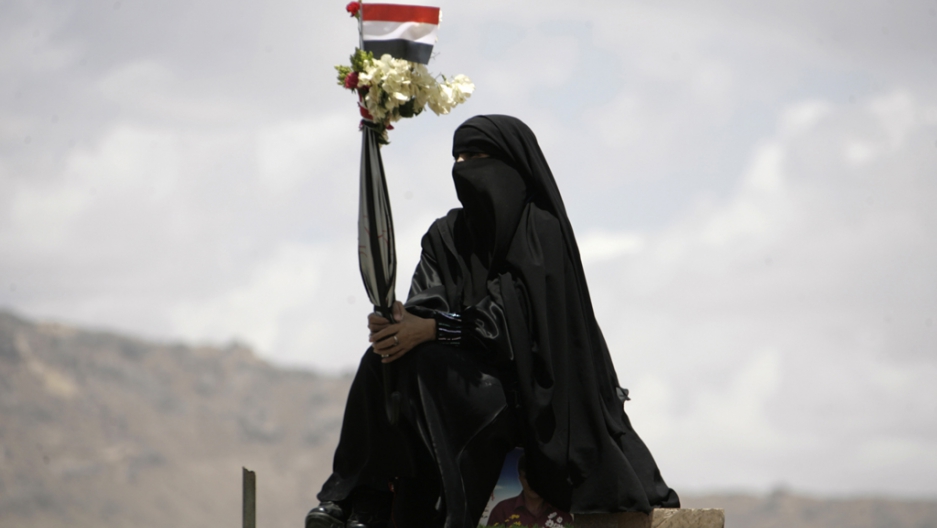 A Yemeni anti-government protester attends a parade marking the anniversary of Yemen's reunification on the sidelines of a daily demonstration calling for the ouster of President Ali Abdullah Saleh in Sanaa on May 22, 2011.
Credit: Mohammed Huwais
Share

ADEN, Yemen — Here in this port city, nestled between the foothills of southern Yemen and the Indian Ocean, separatists are reasserting their independence, adding yet another potential break in the already fractured state of Yemen.

Hardly a single Yemeni flag flies above this port city these days that does not have emblazoned across it the blue triangle and red star of the socialist party, a symbol of the once independent state of South Yemen and it's socialist past, and a tangible example of the overwhelming desire here to secede.

Except for a civil war fought in 1994, North and South Yemen have remained one since 1990, when unification was finally brokered after decades of negotiating. A southern separatist movement, known as Harak, however, formed in 2007 and battled off and on with President Ali Abdullah Saleh’s authoritarian regime as it kept the dream of independence alive.

Now, taking advantage of the power vacuum left when the president fled to Saudi Arabia for treatment after an attack on his palace last month, the southerners — like the rest of Yemen’s disparate political and tribal groups — are attempting a comeback.

Seemingly, this would be as good a time as any. Tribal infighting in the north is keeping the country’s military well occupied and Yemen’s capital, Sanaa, is in a practical lockdown as political parties and protest groups jockey for power in the president's absence.

With no national military units around, the southern separatist movement has been able to operate openly for the first time since its founding.

“We want to reestablish our southern state. It will be a liberal, social democracy. We’re closer than ever,” said Brig. Gen. Ali Mohammed Assadi, a prominent Harak leader.

But only a few miles to the east of where the foundations of this social democracy are being laid, a city has fallen under the control of Al Qaeda militants — throwing a serious wrench in the plans of the separatists, who largely blame Saleh for what they say has been his complicity in the militant takeover.

According to government officials, Al Qaeda in the Arabian Peninsula seized Zinjibar, the capital of neighboring Abyan province, last month and has controlled it ever since.

After the fall of Zinjibar, intense fighting in Abyan and Lahj provinces forced thousands of residents to seek refuge here in neighboring Aden. Many of them are now living in schools that have been turned into makeshift refugee camps.

“We couldn’t find shelter from the constant airstrikes and we had no water to drink. Our only choice was to try and make our way to Aden,” said Abdullah Fadhli Al-Qowd, 55, who fled with his 11 children, his mother and his four brothers and their families.

Their frustration is directed at Saleh (and the United States for supporting him), who they say has allowed Al Qaeda to once again set up shop in their province.

“There were no soldiers there to protect us from the attacks. Why do you think that is? Saleh is allowing them to take over the south. He doesn’t have the manpower to stop us from seceding, so he’s using militants,” said Yaseen Mukhare, a Yemeni man who is acting as an advocate for the refugees.

A common perception among Yemenis is that Saleh purposely allowed the militants to regain control of the province in order to both convince the United States that it should continue to support the president, a long-time ally in it's war on terror, as he faces a massive popular uprising calling for his removal, and to buoy his regime against the resurgent tide of separatism in the south.

Many, in fact, blame Saleh for the existence of Al Qaeda in Yemen altogether.

During the civil war in 1994, Saleh recruited Yemeni veterans — who had fought on the side of Afghanistan in its war with the Soviet Union — to go south to fight the separatists, who were declared to be socialists, and therefore atheists, by the northern religious elite.

Several prominent southern leaders say it is these very men that are now threatening to overrun southern Yemen and the same men that the United States is planning to kill using a program of intensified drone attacks in the coming months.

“During the 1994 civil war, there was still a cold war mentality being used in Yemen’s case. Saleh made the U.S. choose between him and the socialists. Since the beginning, they were all together against the socialists,” said Qassin Dawoud, a long time member of the Yemeni Socialist Party.

“Sixteen thousand Afghanistan veterans were sent south to fight us. No one talks about this. These same men bombed the U.S.S. Cole and these same men are threatening to overrun the south and occupy Aden,” he added.

“20 years later, the civil war is still being fought in South Yemen. And just as he did before, Saleh is using jihadis to do it.”

With the specter of further U.S. drone strikes hanging over residents in the south, separatist leaders are wondering why the United States has not engaged them diplomatically.

“Look, the cold war is long over. In his confirmation hearing, the current U.S. Ambassador to Sanaa, Gerald Feierstein, said he would negotiate with the Harak. Until now, he hasn’t even visited the south. The Harak is the only authority in these rural areas and we need help to fight these militants,” Dawoud said.

Aden natives and refugees alike are nervous that without a professional army to defend their borders, these militants operating just miles away may attempt to take their city as well.

“What’s stopping them from coming to Aden?” Mukhare asked. “They’re going to fight their way into the city. Where will we go after that, Somalia?”