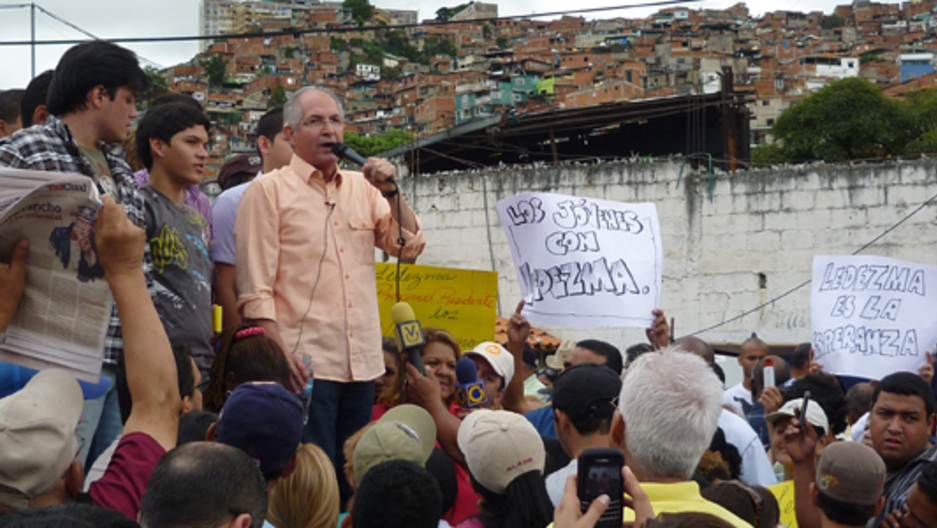 Share
By John Otis After inaugurating a basketball court in a Caracas slum, Antonio Ledezma demonstrates why he's no Michael Jordan. The mayor misses eight consecutive free throws. He's so bad it's excruciating. But the crowd urges him on. Ledezma is a persistent guy. He was expected to lose the 2008 mayoral election. Instead, he trounced a Chavez loyalist. Since then, Ledezma and his staff have faced physical abuse and legal roadblocks as they try to run Caracas, a chaotic, crime-ridden city of 5 million. In 2009, the pro-Chavez National Assembly passed a law stripping Ledezma of nearly all his budget and responsibilities. Ledezma protested by staging a week-long hunger strike. It didn't work. City treasurer Hector Urgelles says Ledezma lost control over the city's hospitals and schools as well as the police and fire departments. They're now run by a Jacqueline Farías, a Chavez appointee. She's become the de facto mayor of Caracas. Like Ledezma, several opposition mayors and governors have been sidelined by parallel authorities named by Chavez to rubber stamp his policies. Ledezma says these maneuvers show that, when his side loses, Chavez acts more like a dictator than a democrat. "He is a president who ignores the constitution, tramples on the rule of law and tries to undermine popularly elected officials," Ledezma said. He says Caracas residents still consider him the legitimate mayor. Though, he no longer operates out of City Hall. Soon after Ledezma took the oath of office, pro-Chavez thugs occupied the ornate, colonial building, painted graffiti on the walls and urinated on the floors. "It was very, very difficult to get in there, said Maria Valero, a Ledezma staffer. Valero says she and fellow Ledezma staffers faced constant harassment. "People insult you," she said. "One day we have to get in the car very quickly because they were with sticks to hit the car." For the safety of his workers, Ledezma moved his base of operations to a Caracas high rise. Farías, the Chavez appointee, now works out of city hall. At Ledezma's new headquarters, many of the offices are vacant. The mayor's workforce has been cut from 17,000 to 3,000. There are signs of life in the office of parks and recreation. It's one of the few departments Ledezma still controls. But he's not moping. The mayor's diminished role means he has more time to pursue his ultimate goal. At a campaign event the crowd yells in Spanish "Se siente, se siente, Ledezma president!" Although the Venezuelan elections are 17 months away, Ledezma has launched his campaign for the presidency. Ledezma must first win a February opposition primary. If he does, Ledezma would likely face his long-time nemesis – President Chavez – who is expected to seek re-election if he fully recovers from his recent cancer surgery. Still, Ledezma is used to being the underdog. His current job is all about making something out of nothing. His tiny budget means Ledezma must pass the hat among private donors and enlist neighborhood volunteers to build projects, like that new basketball court. And as Ledezma proves at the free throw line, he's got a stubborn streak. The mayor keeps taking errant shots until he finally puts the ball through the hoop.