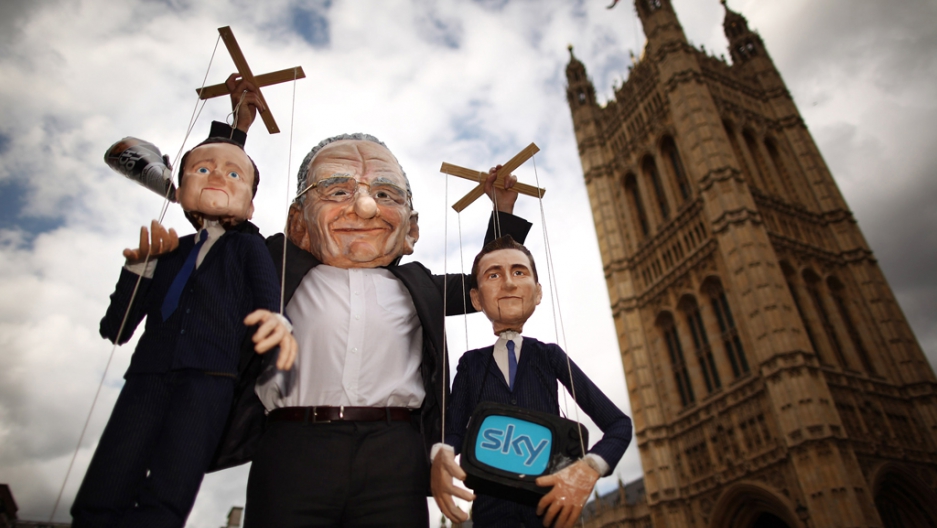 Update: News Corp will cease publication of News of the World after Sunday's issue.

LONDON, United Kingdom — The ending of the classic film "All the President's Men" shows a teletype machine hammering out headlines as one by one the men who tried to cover-up Watergate resign and go to prison. The dam has burst and the truth is flowing.

It felt like that yesterday in Britain as the phone-hacking scandal at the Rupert Murdoch-owned tabloid, News of the World, burst open. But rather than a dam, this is like a burst boil — sliming everyone who is close to the situation including British Prime Minister David Cameron and Murdoch.

The day started with the revelation that following the terrorist bombings of July 7, 2005, the News of the World hacked the mobile phone messages of families of some of the 52 people killed that day. By mid-morning, the paper's major advertisers — Ford and Mitsubishi cars, Mumsnet and Lloyd's Bank — suspended their ad campaigns. Their action followed a Twitter campaign urging businesses not to buy ads in the paper. In mid-afternoon Parliament debated the issue for three hours. The day ended with $1.7 billion wiped off the value of News Corp's shares in New York.

Something decisive had changed in the public's view of the story. The phone hacking scandal was first revealed in 2009 and has occasionally flamed back into life, but as a story that primarily interested those at the intersection of politics and the media in London. The story was about celebrities and politicians, just the kind of folks that people who buy the News of the World — Britain's best selling Sunday newspaper — want to read about. There was a great shrug of the shoulders. But hacking into the phones of grieving parents of terrorist victims is scandal of a different order of magnitude. Add to that the revelations in the last week that the paper's operatives also hacked a child murder victim's phone and you have the makings of a corporate crisis for News Corp, Murdoch's globe-girdling empire.

It also deepens the crisis for Cameron, whose former media chief, Andy Coulson, resigned last September over his role in the unfolding scandal. The chief executive of News International — the British arm of News Corp — is Rebekah Brooks, editor of the News of the World when the practice of phone hacking began to grow. Brooks is the prime minister's neighbor in Oxfordshire. The two have been close friends for many years. Members of his own party have been calling for Brooks to resign. Cameron is in the middle here and it is an uncomfortable position to be in.

Peter Oborne is a columnist for the right-wing Daily Telegraph, aka the Daily Torygraph. His voice is the voice of the Conservative grassroots. In a column headlined "David Cameron Is In the Sewer Because of His News International Friends," Oborne wrote, "In the careers of all prime ministers there comes a turning point. He or she makes a fatal mistake from which there is no ultimate recovery. With Tony Blair it was the Iraq war and the failure to find weapons of mass destruction ... . David Cameron ... now faces exactly such a crisis. The series of disgusting revelations concerning his friends and associates from Rupert Murdoch’s News International has permanently and irrevocably damaged his reputation."

Calls have come from every point of the political compass for Cameron's good friend Brooks to resign. Speaking in an emergency debate on the scandal yesterday, Labour MP Tom Watson said, "In the world of Rebekah Brooks, no one can grieve in private, no one can cry their tears without surveillance, no one can talk to their friends without their private feelings becoming public property."

It is extraordinary that so much has been put on the line for an activity — phone hacking — that in reality is nothing more than a "fishing expedition and a short cut," according to Roy Greenslade, professor of journalism at City University of London and former senior editor for the News of the World's sister paper The Sun as well as the Murdoch-owned Sunday Times. "The only reason they would be hacking 7/7 victims' phones is that you might hear something amazing, some amazing expression of grief. They cast their net very wide. There's just that possibility you might generate a human interest story."

"Going on the knocker" as Greenslade calls ringing front door bells of families bereaved in a public tragedy is probably the worst part of being a reporter. Hacking saves you the trouble and provides words to fit in people's mouths. Tabloids sell in their millions not just on scandal but on heart-rending human interest stories. In pursuit of those stories questions of privacy and decency can be relegated to second place.

Beyond the moral questions this is also now a story about the succession at News Corp, the world's largest media company. James Murdoch, the youngest son of Murdoch's longest marriage, was in charge of News International during the period of extreme phone-hacking activities. He also put together a deal in which News Corp would buy outright ownership in BSkyB, Britain's largest satellite cable operation. Because of the size of News Corp's operations in Britain, competition issues were raised with regulators. Ultimately the Cameron government had the final say on whether to refer the deal to the Competition Commission. Last week, Cameron's cabinet secretary in charge of making the decision, Jeremy Hunt, said he would not be making the referral and would let the deal go ahead.

In the wake of the new revelations that deal is now in jeopardy. In the emergency debate yesterday, Labour MP Chris Bryant said, "We have let one man have far too great a sway over our national life. At least Berlusconi lives in Italy but Murdoch is not resident in this country and he does not pay tax here ... . No other country would allow one man to garner four national newspapers, the second largest broadcaster, a monopoly on sports rights and first view movies. America, the home of the aggressive entrepreneur, doesn't allow it. We shouldn't."

On the other side of the chamber, Conservative and Liberal Democrat MPs nodded in agreement. Watson closed the debate with a pointed accusation against James Murdoch, saying "I believe Mr. James Murdoch should be suspended from office while the police now investigate what I believe is his personal authorization to pan a cover-up of this scandal." He added it was, "nothing short of an attempt to pervert the course of justice."

The problem is that the slime from this scandal is all over the Metropolitan Police as well. Yesterday, Sir Paul Stephenson, acknowledged that a number of police officers received money from the News of the World during the time phone hacking was rampant. This may or may not explain why an initial police investigation into the affair was afflicted by a "certain lethargy" in the words of the man who ordered the inquiry, Alan Johnson, Home Secretary in Gordon Brown's cabinet when the scandal broke in 2009.

Regardless of what the police do, the focus is now on James Murdoch and Rebekah Brooks, if the BSkyB deal falls through — and its potential revenue stream is lost to News Corp's balance sheet — the fallout could be severe. Some News Corp shareholders are already complaining about what they see as nepotism at the top.

But the ultimate effect of the phone-hacking scandal on who succeeds Rupert Murdoch at News Corp is in the realm of speculation.
In the realm of fact the scandal keeps unraveling. Today's revelation is that the mobile phones of soldiers killed in Afghanistan were hacked ... and there is more, much more to come.