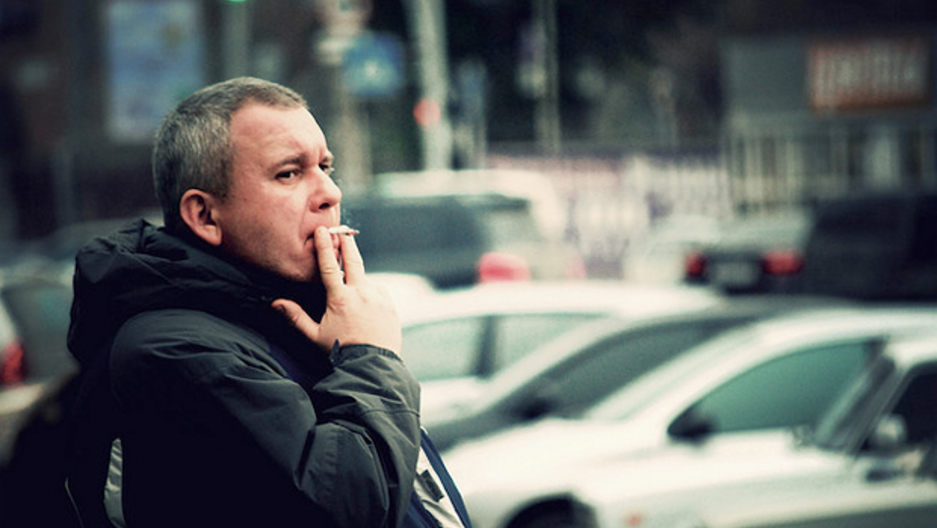 Share
By Jessica Golloher Elena Zlatoustovskaya sits in a popular Moscow restaurant. She looks cool, sleek and sexy holding an ultra-slim cigarette between her fingers. At least that's what marketing wizards would have you think. And Zlatoustovskaya should know. She's a big wig at the Moscow office of public relations firm Edelman. "Smoking is quite traditional thing in Russia," Zlatoustovskaya said. "A lot of ladies are smoking in Russia. This is a really big problem for Russia. A lot of people are accustomed to smoking really cheap cigarettes with low quality tobacco. They are just accustomed to smoke. And accustomed, they are. A World Health Organization study puts Russia among the smokiest nation in the world with more smokers per capita than Indonesia or China. And, according to Zlatoustovskaya, advertisers are using every weapon in their arsenal to get even more smokers. It's not unusual to see scantily-clad young women standing on some of the city's most popular streets, like Tverskaya, offering cigarettes to lure people in. "Sampling is very popular," Zlatoustovskaya said. "So you're just walking around the street and a girl near the metro station comes to you and says we have new cigarettes. They will pay a lot of attention to that kind of action, that kind of promotion." That type of street-level promotion seems to be doing the trick. In 2009, Russia was the largest market worldwide for slim/ultra slim cigarettes, which are generally targeted towards young women. These types of cigarettes often feature flowers on their packaging. Aromatic cigarettes are also the latest, greatest thing. One of Philip Morris' brands, Virginia Slims Uno, in both black and white is meant to fit a woman's "mood." Ads for the cigarette feature hip, sophisticated model-type looking women on the go. Phillip Morris officials say their slim cigarette sales jumped 91 percent from 2006 to 2009. Those numbers have embarrassed the Kremlin and Russia has pledged to cut the number of its smokers by up to 15 percent by 2050. The government has also banned cigarette ads on television and has introduced warning labels on cigarette packages that read, "Smoking Kills". And that smoking can cause heart attacks, strokes, death and impotence, among other things. The WHO wants Russia to do more, as other countries have done, like put graphic images of smoke-ravaged lungs on cigarette packages. What does PR Director Zlatoustovskaya think about the possibility of that happening? She rolled her eyes. "I'm not sure they will do anything like that," Zlatoustovskaya said. "I don't think they would change the package. They get very good taxes from that so I don't think they will decide and say we care about our population we need them to be more healthy. That is why we will do our best; we will do whatever we need to do just to keep them healthy. Now, I don't believe that." Meanwhile, Russia's health minister, Tatiana Golikova says the country has to do everything possible to combat the country's high smoking rates, so she's all for the gloomy pictures.