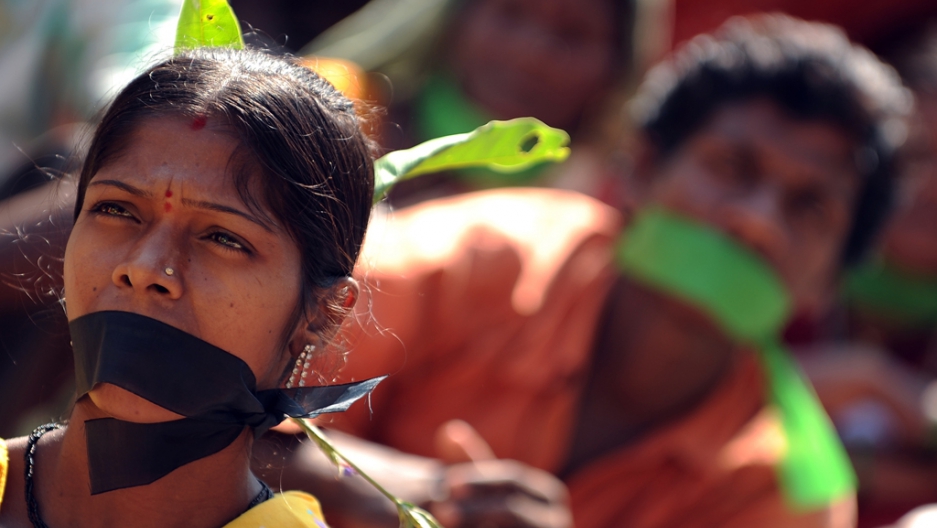 NEW DELHI, India — With a vibrant, critical press and a strong culture of dissent, India stands out as one of Asia's strongest champions of freedom of speech.

But even as new technologies give citizens greater power to exercise that freedom, the government is making efforts to the contrary.

On the one hand, Indian authorities are capitulating to extremist groups and political parties that demand the banning of books and films claimed to be offensive. On the other, they are flirting with outright curbs on freedom of speech — with new laws governing internet content and the print media.

It's a dangerous cocktail.

"The risk of abuse of these laws to silence speech is going to be very, very high," said Meenakshi Ganguly, South Asia director for Human Rights Watch.

In recent months, India drafted new rules for the web that will allow anyone to demand that internet sites and service providers remove supposedly objectionable content based on a sweeping list of criteria.

Charges of sedition were used to try to silence author Arundhati Roy and activist Binayak Sen, two of the country's most prominent citizens. Sen spent two years in jail before the Supreme Court freed him on bail this April.

Joseph Lelyveld's controversial biography of Gandhi joined the list of hundreds of books to be banned with little regard to their actual contents. And Maqbool Fida Husain, one of the country's most feted artists, died in exile imposed on him by legal harassment and death threats from extremist groups that objected to some of his paintings.

Even before the rules for internet speech were notified under the IT act in April, the Department of Information Technology had quietly blocked 11 websites, the Center for Internet and Society discovered through a recent Right to Information (RTI) request.

Bloggers and social media activists fear that the new rules, which also regulate posts on YouTube, Facebook and similar sites, will set off a constant battle against bans. While the law requires these sites to remove so-called "objectionable content" within 36 hours of receiving a complaint, critics say there's no mechanism for the site or initial user to defend the posting.

Moreover, the definition of objectionable content — which includes anything that is "harmful, threatening, abusive, harassing, blasphemous, defamatory, pornographic, libellous, invasive of another's privacy, hateful, disparaging, racially, ethnically or otherwise objectionable, relating to money laundering or gambling" — is vague enough that anything at all might meet the criteria for a ban.

"It [the new list of rules] is in direct violation to the freedom of speech," Pavan Duggal, a Supreme Court lawyer who specializes in cyber law, told the Times of India.

At the same time, even as the rapid expansion of television news channels, newspapers and magazines suggest that India's free press is as vital as ever, critics argue that certain stories have become more difficult to tell.

Early this year, the information and broadcasting ministry urged print publications to write more positive stories, even as it proposed amendments to the Press and Publications Act giving the state greater control over content. Among other measures, the amended law would allow local officials to suspend publication and bar anybody convicted of terrorist acts or any other act that endangers the security of the state from printing a newspaper or magazine.

And while the broadcast ministry continually calls for "self-regulation," other forces ensure that self-censorship remains rampant.

Various media outlets have begun the practice of accepting payment for certain types of news — even political reports — while journalists who expose crime and corruption regularly face violent attacks.

Though police this month apprehended several suspects in the slaying of a Mumbai crime reporter, most of the assaults on journalists go unremarked and unpunished, according to a recent report by the India-based Media Foundation. The alleged perpetrators range from political parties to corporate thugs to the police themselves, according to a press release.

Meanwhile, the legal and financial obstacles to reporting from India's poor rural areas are greater than ever, according to Shubhranshu Choudhary, a former BBC journalist who now runs a mobile phone-based radio news network in Chhattisgarh. Most rural Indians can't read the newspaper and can't afford television, for instance. But even though the government recently allowed FM stations and community radio, news broadcasts are still banned across the dial — apart from the government-friendly reports by state-owned All India Radio.

Newspaper reporters based outside of major cities are paid a percentage of the advertising revenue they collect, rather than a straight salary, so they are beholden to local corporations rather than their readers or editors. And, increasingly, television rating points (TRPs) rather than editorial standards define the value of news, Choudhary said, citing several television channels' recent decision to remove their reporters from Chhattisgarh — seat of a Maoist rebellion which Prime Minister Manmohan Singh and others have described as the greatest threat to India's security.

"Chhattisgarh does not have even a single TRP box," Choudhary said. "They're very clearly saying, whatever happens in Chhattisgarh, why should we bother?"