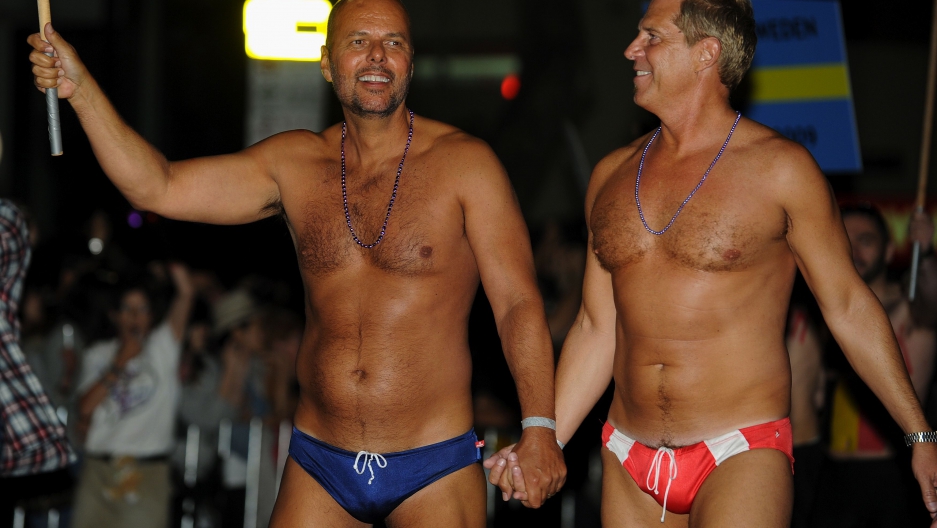 It was the "I do" heard around the world.

The New York state legislature's "historic" vote to legalize same-sex marriage tweeted, Facebooked and otherwise made its way to Australia, eliciting a rowdy reception and renewed calls for similar equal treatment of two-person unions Down Under.

The governing party of the country's most populous state, New South Wales — the Labor Party, which also governs at a federal level — is expected to vote in support of gay marriage at its annual conference next month, the Sydney Morning Herald reports.

And the ruling committees of the center-left party in other states — namely Queensland, Western Australia and South Australia — have adopted similar motions calling for equal marriage rights for the gay and lesbian community.

Australia prides itself on diversity — and the largest city, Sydney, on having one of the world's biggest out-and-proud gay populations, although how such a statistic is arrived at remains a mystery to Down Under. (A number of academic papers — including this report titled "How Gay is Australia" — appear to rely on census data, which is as trustworthy as any. )

And for what it's worth, the Independent newspaper has named Sydney as one of the top-10 cities of the world in which to "to live gay life to the full." The only drawback being, the report says, that same-sex marriages are still not enshrined in federal law in Australia, as they are in parts of the U.S. and elsewhere.

The issue of gay marriage is scheduled to be debated at a national Labor conference, to be held in December this year.

Advocates of a change in national policy, which only recognizes marriage as between a man and a woman, hope a yes vote at the state Labor meetings will increase pressure on the Labor Prime Minister, Julia Gillard, to legalize single-sex unions.

Although Gillard herself — who is unwed, childless and by all accounts proud of it — has said she is not in support of legalizing gay marriage in Australia, the backroom powerbrokers of the Labor Party usually get what they want, a point Gillard knows only too well, having been installed in the prime ministership after the elected leader Kevin Rudd was ousted in backroom coup.

And as Penny Sharpe, a member of the powerful NSW branch of the party, told the SMH: ''The Labor Party has a proud history of supporting equality and this is the final piece in the puzzle to removing discrimination against same-sex couples.''

Meanwhile, a spokesman for conservative opposition leader Tony Abbott said his Coalition party's position at a national level was that marriage should be between a man and woman, surprising no-one. Abbott owes his nickname "the Mad Monk" from his time studying to enter the Catholic priesthood.

A change ought to make at least one Australian mother proud.

Michael Faucett, 46, met Brendon Beavan, 37, more than four years ago. Beavan told the SMH that he immediately popped the question: "Do you believe in marriage?"

Faucett, who reportedly said "I do," wants to tie the knot before his mother gets too old.

"I always said to her, when I find the right man, I will definitely have a wedding,'' he tells the SMH. ''And then when I met Brendon, she was over the moon.

"She's the one always saying: 'When are they going to change these bloody laws?'"