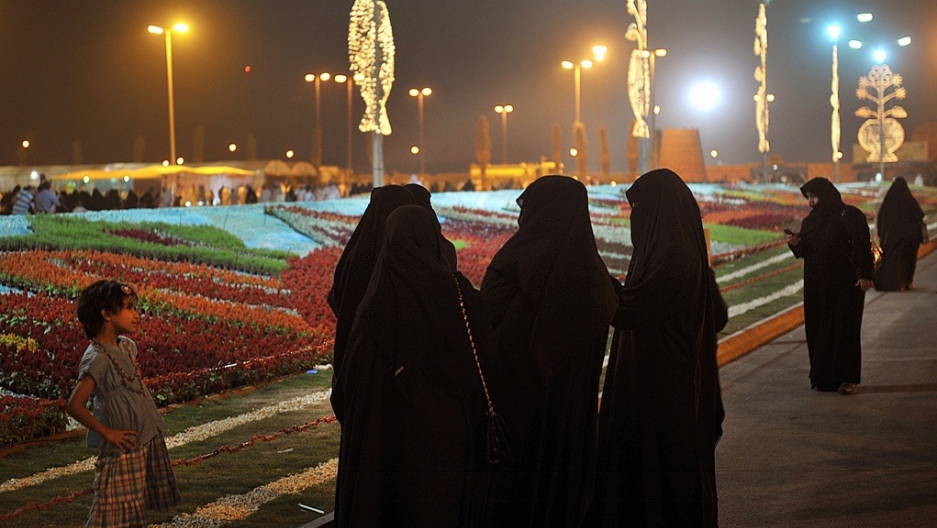 Saudi women gather in front of a carpet made of over 135,000 flowers at the Riyadh Spring Festival in the Saudi capital on April 15, 2011.
Credit: Fayez Nureldine
Share

Nearly 60 women responded to the call by women’s rights activists to collectively defy the driving ban on June 17, according to a tally posted at #Women2Drive, the campaign’s Twitter page.

This small number, and a weak turn-out of drivers since then, has disappointed many women.

“I expected more” to drive, said university professor Aziza Yousef. “But I know there are a lot of ladies waiting for the others to make the initiative … they don’t want to be the number one. They will follow.”

Campaign organizers, who say they intend to press on with their effort, are calling the June 17 event a success because there were no arrests or major incidents.

“The day was a celebration for our nation and, in particular, for our women whose calls for driving came to fruition and materialized in a law-abiding manner without any protests or demonstrations,” read a June 21 statement from the campaign.

Its organizers, a loose coalition of male and female women’s rights activists and intellectuals, have always said that the campaign should go beyond that one-day event and they have urged women to flout the ban by driving on errands on a daily basis.

But only a handful of women have done that.

In Riyadh, the Saudi capital, professor Yousef, who drove for seven years while living in the United States, said in an interview Wednesday that she had driven every day since June 17.

“One or two times (a day) I get out of my house, go to the supermarket or go to a friend’s house and everyone around is just giving me a thumbs up and I didn’t have any problem except today,” she said.

Yousef said she and her daughter, Sara Al Khaldi, were driving near Prince Sultan University when three male teens spotted them and called police.

A policeman stopped her, she said, but after giving her a verbal reprimand and ordering her to drive home immediately, he let her drive away.

Another Riyadh resident, Azza Al Shamasi, drove her white Pajero in the same neighborhood Wednesday. When she returned home, she found that a second family car had been vandalized.

Someone had smashed the rear view mirror on the passenger side of the Lexis and left a hand-written note in English that said, “Plz. Do Not Drive.” On the back of the note, the vandal had written “Biatchhh,” which apparently was meant to be “bitch.”

Al Shamasi said she believes the Lexis was targeted because she had posted to YouTube a video of herself driving it on June 17.

Sara Al Khaldi, Yousef’s daughter, said that driving “has a lot to do with being independent. My husband and my brothers are not always there to take me on my errands … . I’m capable of being a mother, of raising my children, of getting my education. So I think I am capable of driving.”

Al Khalidi said she believes that “it’s going to be a matter of months” until Saudi women will be able to drive legally. “I have great faith in the forward vision of King Abdullah.”

The king and many other senior government officials, as well as high-ranking royal princesses, including the king’s daughter, Princess Adila, want the driving ban scrapped.

It was the king, Saudi sources said, who ordered the release of one of the campaign’s organizers, Manal al Sharif, 32, who was detained for nine days last month after posting a video of herself driving in an effort to drum up support for the June 17 event.

Police appear to have orders not to arrest female drivers but little guidance about what to do instead, judging from the exasperation expressed by some policemen after stopping women drivers.

“They are confused about what to do with us,” Yousef said.

In at least one instance, a woman was given a ticket for driving without a Saudi license. Her husband was later warned that their car would be confiscated if his wife drove again.

The government, however, has failed to come out with a clear endorsement of a women’s right to drive, apparently to avoid alienating their ultraconservative constituency, which views women driving as a Rubicon whose crossing would lead to an unstoppable Westernization of Saudi society.

These hardliners have been expressing their views on conservative online forums, where they have posted remarks entitled “Failure of ... American Plans to invade Saudi Society” and “Women’s Terrorism.”

Some comments thanked the police for stopping “disbelievers” from ripping the unity of Saudi’s “respectful” society; others claimed that society rejects calls for women driving being made by “apostates.”

Tweets to #Women2Drive indicate that some Saudi women wanted to participate in the June 17 event but could not because they don’t know how to drive, or don’t have a license or don’t have access to a vehicle. If their legal male guardian opposes women driving, there is little chance women could grab the family car keys and go for a spin.

Timing is another problem for the campaign: It is the summer travel season. Several campaign activists are already outside the kingdom and with schools closing last week, more families are getting ready to depart.

Asked a few days before June 17 if she knew anyone who planned to drive that day, one young woman messaged that she did not because “everyone is either traveling or getting ready to travel.”