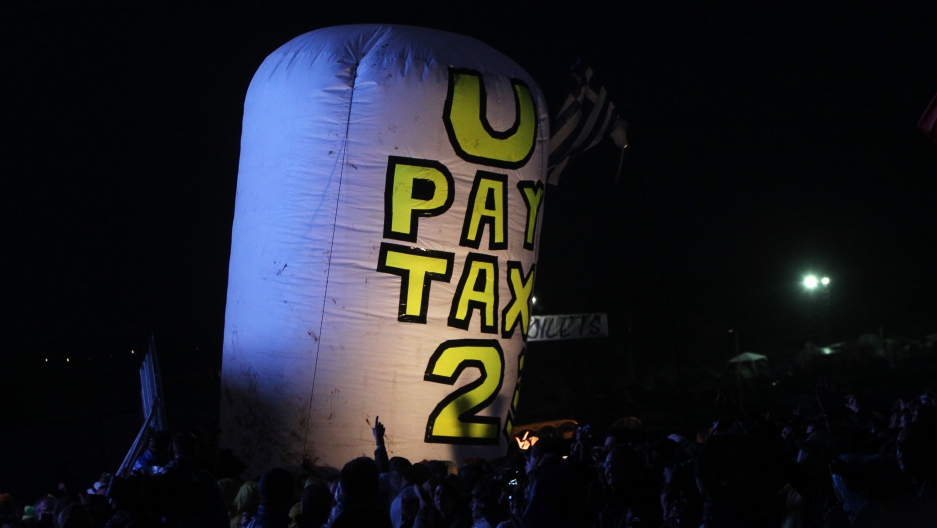 A protest against U2 at the Glastonbury Festival on June 24, 2011 in Glastonbury, England.
Credit: Dave J. Hogan
Share

Ireland's most-successful band U2 and its frontman Bono were accused of dodging taxes in their home country by protesters at the group's first performance at England's Glastonbury Festival, according to the Sydney Morning Herald.

As Bono and his bandmates took to the Pyramid Stage at the huge, muddy outdoor music festival, activists from the direct action group Art Uncut inflated a 20-foot balloon emblazoned with the message “U Pay Your Tax 2," Sky News reported.

As the activists tried to release the balloon over the crowd of about 50,000, security personnel wrestled them to the ground and deflated the balloon, sparking angry clashes with about 30 protesters, with several of them pinned against a fence near the stage, according to the Telegraph. There were no arrests.

One of the Art Uncut group members said: “That was totally over the top. He threatened to hit me.”

U2 was criticized in 2006 when the band reportedly shifted most of its business affairs from Ireland to the Netherlands, where royalties on music incur virtually no tax, after the Irish government cut tax breaks for income earned from "works of artistic merit," CNN reported.

Art Uncut says that while Bono campaigns against poverty in the developing world, his very wealthy group has run out on paying Irish taxes at a time when the country desperately needs the money. Ireland, which has received an international bailout, is dealing with difficult spending cuts, tax increases and unemployment as it tries to pull its debt-burdened economy out of danger of bankruptcy.

Art Uncut had previously announced their plans to protest against U2 at Glastonbury, according to AFP:

"Bono is well known for his anti-poverty campaigning but Art Uncut is accusing him of hypocrisy," campaigner Charlie Dewar said.

"U2's multimillion-euro tax dodge is depriving the Irish people at a time when they desperately need income to offset the Irish government's savage austerity programme."

U2 was headlining the first night of the three-day Glastonbury Festival, the band's first appearance at Britain's most prestigious summer music event. About 170,000 people have flocked to a farm in southwest England for the festival.

One of the activists at the show, who didn't give his name, said: "Political activism used to belong at Glastonbury. This was all going to be completely peaceful."