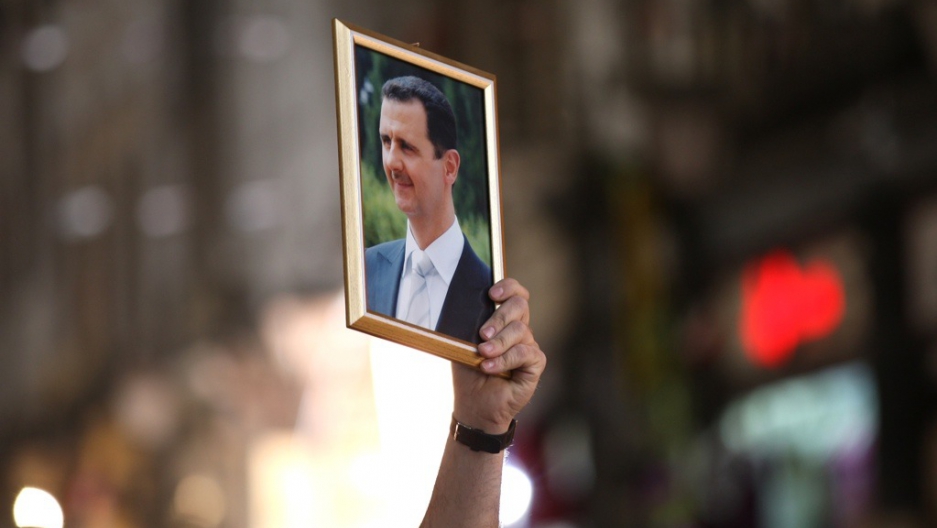 A Syrian man holds up a portrait of President Bashar al-Assad during a rally to show their support for the president in Damascus on April 30, 2011.
Credit: Louai Beshara
Share

DAMASCUS, Syria — Thousands of Syrians took to the streets in the towns of Homs, Hama, Lattakia, Zabadani, in neighborhoods and towns throughout and surrounding Damascus and in the suburbs of Aleppo on Friday.

Security forces opened fire on demonstrators in the town of Kiswah, which is south of Damascus, killing at least five people, agencies reported.

The same day, the EU announced it had frozen the assets of and banned European travel for seven more individuals and four companies, bringing its overall list to 34, including Syrian President Bashar al-Assad.

Meanwhile, Turkey has begun insisting that Syria’s military withdraw from towns close to its border, where at least 10,000 refugees have fled into or close to Turkey.

Conflict continues to simmer throughout the country, just days after Assad spoke publicly for the third time since protests against his rule began in mid-March, in an address that admitted to corruption and other government failings but stopped short renouncing the military’s violence against civilians.

More than 1,400 Syrians have so far died in the unrest, human rights groups say.

But despite it all, the central squares of Aleppo and Damascus have been the site of large rallies in support of the beleaguered president. If those pro-government demonstrations subside, and begin to be replaced by opposition marches, analysts said it would likely signal a tipping point for the regime’s grip on power.

In Damascus this week, tens of thousands of Syrians congregated in Umayyad Square, waving flags and chanting “Abu Hafez” in honor of Assad’s late father and the country’s former leader.

“I wanted to go with my friends — it was fun,” said one 15-year-old boy, Jammal, from Damascus’s old city. While many rally attendants are paid government employees — the former socialist country has a bloated civil service — many others voluntarily attend for the fun, festive atmosphere.

“Sure, some of the people who go love the president and some are paid to go, but a lot of people don’t care about politics. They just need a release from all this stress,” explained a 28-year-old doctor, Burhan, from the Damascus suburb of Jaramaneh.

(More from GlobalPost in Damascus: The real voices of the Syrian uprising)

In Aleppo today, as well as last Friday, thousands of people also marched in the city streets waving pro-government signs and wearing t-shirts emblazoned with the president’s face and the slogan, “I love Syria,” or “We are all with you Bashar.” Hundreds more draped a Syrian flag across the city’s iconic citadel and released “freedom balloons” into the air.

Because the capital contains a large Christian community — 25 percent of the city’s population — its traditionally pro-regime stance cancels out the city’s large proportion of conservative Sunnis, a young woman who works for a Catholic refugee organization in Aleppo, said.

“The Christians here are scared,” she said. “And because they’re scared, they’re willing to be totally blind to what’s going on, to continue saying — and really believing — that everything’s fine. It’s crazy.”

A sense of denial permeates the city. Shopkeepers and hotel clerks insist that all is well. When asked if there were any demonstrations in the city, one concierge scoffed.

“No, nothing here. Nothing in all of Syria!” he said.

Meanwhile, on the same day, nearby Jisr al-Shughour remained on lockdown while one student at Aleppo University was killed and another 12 arrested by security during a small demonstration on the campus.

Whereas residents of Damascus are speaking more and more with cautious openness about events taking place, among most Aleppans, there seemed to be little space for such discussion. There are widespread rumors that the muchabarat, or secret police, are monitoring the city closely, with the knowledge that keeping it quiet is key for the regime’s survival.

"Because the military is everywhere else, they've sent the best of the best muchabarat to keep it from spreading here," the catholic charity worker said.

But Radwan Ziadeh, an exiled opposition activist based in the United States, said that it is only a matter of time before large-scale anti-government demonstrations take hold in Aleppo and Damascus.

Aleppo is the country’s economic hub that relies heavily on tourism and trade with Turkey, two industries hard-hit by the current unrest. Hotels are vacant and even the most popular restaurants sit completely empty. Without an economic incentive for the middle class to maintain the status quo, they too will soon demand change, Ziadeh said.

“Hafez [al-Assad] depended on the middle class in Aleppo in Damascus to maintain his power, but [the regime] can’t anymore,” he said. “The demonstrations will not stop — they will soon reach the major cities.