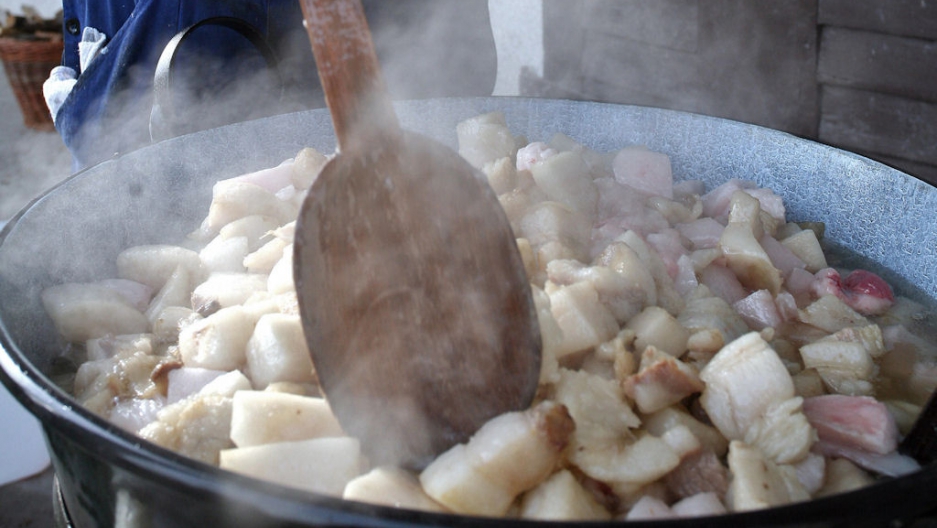 Update: The "fat tax" — also known as the "hamburger tax" — passed July 12 and will be levied starting Sept. 1. The new fines on purchases of junk food are expected to raise $100 million a year, most of it earmarked to cover health care costs.

GRAZ, Austria — Hungary is set to impose the world's most comprehensive junk-food tax, which the government hopes will improve eating habits while helping to rebalance its healthcare budget.

The plan is to put a 10 forint ($0.05) levy on products containing "too much" salt, sugar, or fat, while increasing the tax on liquor and soft drinks by 10 percent. The proceeds, estimated up to 30 billion forint ($160 million), would pay for state-funded health care, which has a deficit of about 100 billion forints ($534 million). Hungary is among the most severely indebted countries in eastern Europe.

(In Japan, being thin isn’t just for fashion or social acceptance. It’s the law.)

Faced with looming deficits, other European countries, such as the United Kingdom, have chosen to cut budgets, or, like Greece and Ireland, been forced to cut them by EU/IMF bailout terms. Hungary, in contrast, is debating a fat tax.

"It will be proposed to parliament this summer and will, in all likelihood, pass easily," said Gabor Csiba, the author of the bill who is president of the Strategic Alliance for Hungarian Hospitals.

"The government is very forceful and can decide more or less what goes through parliament," confirmed Andras Nagy, chairman of Hungarian Heart Association. The tax would take effect Jan. 1, 2012.

Fidesz, a rightist party within which Csiba serves as a local councillor, controls two-thirds of parliamentary seats having won a landslide election victory in April 2010. Since then, it has courted controversy. In October it imposed a "crisis tax" on foreign retail, telecoms and energy companies, the legality of which is being scrutinized by the European Commission. In January, the government rebuffed international outrage against a law requiring media registration.

Food industry representatives have yet to formulate a specific response to the fat tax plan, but in principle oppose such taxes. The CIAA, a European food and drink lobby group, says they are "discriminatory" because they target specific types of food and tend to hit low-income groups hardest. At the same time it says such taxes are cumbersome to collect, economically damaging and have no proven potential to improve eating habits. Danish obesity rates, it says, have risen despite having a tax on candy since 1922.

Despite Fidesz's nationalist tendencies, indulgent Hungarian specialities like deep-fried goose fat would not be given special treatment. "Salt, sugar and fats would involve higher tax, and they are ingredients of this dish," Csiba said. Deciding which tariff should apply to fast-food items like pizzas or hamburgers, which come with a variety of toppings, could be more troublesome, said Godfrey Xuereb, leader of the population-based prevention team at the World Health Organization.

"As an organisation we welcome it," said Nagy, brushing aside the food industry's observation that fatty, salty or sugary foods are not harmful in moderation. "The intention of the food industry is to make it more complicated than it is. If you go to a food store you can basically decide what is healthy and what is not." The move has the support of 54 percent of the population, according to a poll published this week by the Nezopont Institute, a think-tank close to Fidesz.

Csiba dismisses the idea that the tax would be too small to change people's buying habits."The rate of tax is not small because Hungarians' salaries are not high, so people must choose healthy alternatives or the revenue from the tax will be high." Hungarians already spend about 17 percent of their household income on food, more than double the figure for the United States, and with a sales tax among the highest in the EU. Consumers pay an extra 25 percent on most types of food and drink, except dairy and bakery products, which are taxed at 12 percent. About 20 percent of Hungarians are obese, compared to 30 percent in the United States.

If Hungary does proceed with the law, as seems likely, it would be the first of its kind in the world. The U.S. state of Washington levies a $0.02 tax on every bottle of soda. Romania's health ministry had considered a more comprehensive taxation scheme to raise 700 million euros ($999 million) a year, but shelved the idea in March, saying it would be inappropriate at a time when food prices are rising dramatically. In Romania, the average family spends nearly 40 percent of household income on food, almost seven times the share in the United States. Only 8 percent of Romanians are classified as obese.