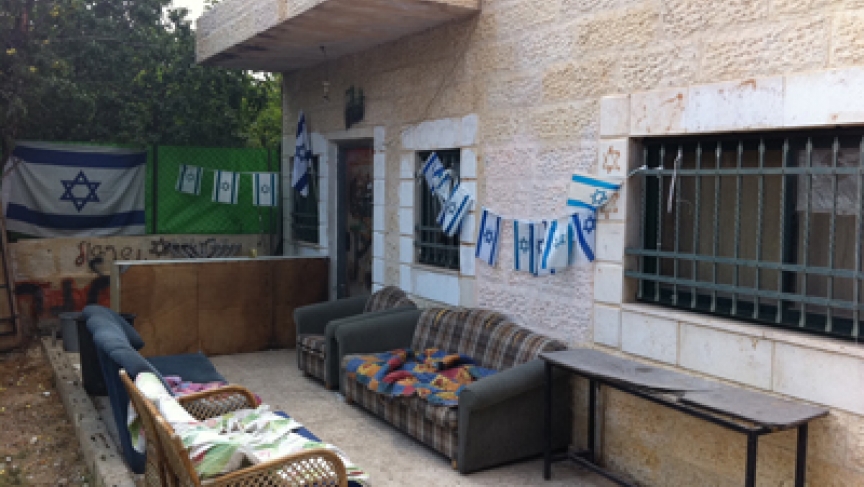 Share
In the Jerusalem neighborhood of Sheikh Jarrah, the Israeli-Palestinian conflict is playing out on the level of a house-by-house, court case by court case, competition. And it is a fight that has gone on for decades. In 1956, Rivqa al-Kurd and her husband moved into a new house in Sheikh Jarrah. The United Nations and the Jordanian government, which controled East Jerusalem at the time, helped settle more than two-dozen Arab families in the area just north of Jerusalem's Old City. Al-Kurd said the trouble started soon after Israel won the war of 1967 and annexed East Jerusalem. Jewish groups started visiting Palestinian families, she said, and telling them the land in Sheik Jarrah belonged to Jews, and that they would have to leave sooner or later. Al-Kurd said her family and many of their neighbors have been fighting a legal battle to stay in their homes ever since. In 2009, things changed for the worse for the Al-Kurds. An addition on the house they had built — with no permit — was determined by a court ruling to be illegal. Then, half-a-dozen Jewish settlers moved into that side of the house. Now, Al-Kurd and her daughter's family, who also live in the main house, are facing an eviction suit. Three extended families have been evicted from the Sheikh Jarrah neighborhood since 2008. Jewish settlers have moved into those homes. But on Wednesday, members of one Palestinian family there scored a rare victory in court. They successfully fought off an eviction suit brought by a Jewish group that owns the land the house sits on. The lawyer for the Palestinian family, Muhammad Dahleh said it was an important decision. "The main argument is that the settlers couldn't really prove any of the reasons that according to law might be a good reason to evict the family from the house that it has been living in for decades now," he said. In East Jerusalem, nearly everything about real estate is intensely political. Dahleh said that Jewish settlers have a plan for the city and that plan is all about politics. "Their goal is clear," Dahleh said, "to prevent the Palestinians from having a continuous Palestinian city in Jerusalem by having these settlements in between the Palestinian neighborhoods." "Our goal, of course, is to prevent that from happening, because we do want a Palestinian state and we do want East Jerusalem to be its capital." That's something many Israelis would oppose, including prime minister Benjamin Netanyahu. And judging by the applause he got in Washington last month, much of Congress appears to agree as well. "Jerusalem must never again be divided. Jerusalem must remain the united capital of Israel," Netanyahu told US lawmakers. Daniel Luria could not agree more with that sentiment. Luria is an activist with a Jewish organization called Ateret Cohanim, which is dedicated to promoting Jewish life and learning in the heart of old Jerusalem. Luria said that includes the Shimon HaTzadik neighborhood, which Palestinians call Sheikh Jarrah. "In the war of 1948, Jerusalem was lost and divided," Luria said. "Jews were kicked out of neighborhoods," he said. "It took until 1967 for us to come back and unite and liberate old Jewish neighborhoods." "You have to understand there were Arabs living in many of the old Jewish buildings and old neighborhoods, like the Shimon HaTzadik neighborhood." Israeli courts have recognized Jewish ownership of East Jerusalem properties based on pre-1948 documents. And many of the Palestinian families still living in those homes were determined to be considered "protected tenants" by Israeli courts. The families were given the right to remain in those homes. But Luria said it also meant that eventually, the residences would go back to the Jewish landowners. That is where the legal fight stands today. In Sheikh Jarrah, 24 of the original 28 Palestinian families who moved there during the 1950s remain. Simply cashing out is not attractive option, because Palestinians who sell homes to Jews risk being ostracized — or worse — in their own community.