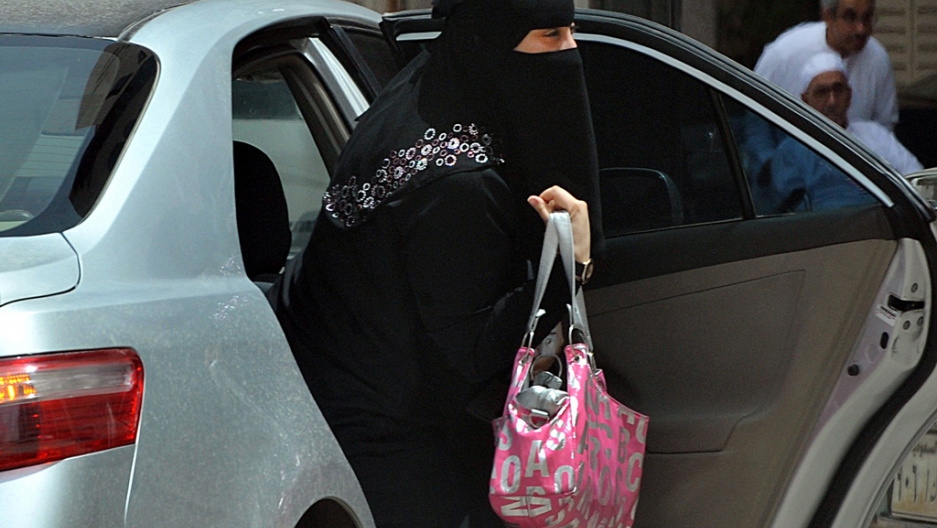 A Saudi woman gets out of a car after being given a ride by her driver in Riyadh.
Credit: Fayez Nureldine
Share

RIYADH, Saudi Arabia — Getting my driver’s license as soon as I turned 16 was a major point of pride for me. I couldn’t live without driving. It’s like eating and breathing — something I take for granted as both natural and necessary.

So when I arrived in Saudi Arabia three years ago, it was strange to see that everyone behind the wheel was male. Since this is the only country in the world where females are prohibited from driving, one of my first tasks was to find a driver.

Luckily, I found Soresh. Like many drivers here, he is Indian. He’s a careful driver, he comes on time, and if he’s busy on another job, he sends one of his driver friends to ferry me around.

I would be lying if I said this arrangement is inconvenient. I get dropped at the entrance wherever I’m going. I don’t have to worry about parking. Flat tire? Someone else’s problem. Road rage? I stay oblivious in the back seat, reading or chatting on the phone. Those boring errands? Soresh delivers my packages and picks up my plane tickets.

But if you told me that I could never drive again, that my mobility would be totally dependent on another person for the rest of my life, that’s quite a different story. That would upset me.

And it upsets lots of Saudi women. Because it’s basically a way to keep them in a box.

“My driver takes me someplace, and then my husband picks me and drives me home,” said one young woman who asked not be named. “I just want, for a few minutes, to be able to go somewhere that no one knows where I am. Men don’t want you to have that freedom. You can go somewhere and they don’t know where you are? It’s their worst nightmare.”

The driving ban is increasingly upsetting Saudi women, who now make up more than half of this country’s university students. Graduating in record numbers, they are looking for jobs and they want to drive themselves to work, to the shopping mall, to the grocery store and to their children’s schools.

This is the right they have been demanding in recent weeks through a campaign on Facebook called “I will drive my car myself,” and Twitter (#women2drive) urging women to grab the car keys and drive themselves on an errand on June 17.

The new social media tools and recent peaceful street action in other Arab countries like Egypt have given the campaign quite a bit of steam. It got even more after one of its most high-profile organizers, Manal Al Sharif, was detained for 10 days last month.

Aiming to publicize the planned protest, Al Sharif posted a video of herself driving on YouTube, along with another video advising women on what they should do on June 17. For one, since demonstrations are forbidden in Saudi Arabia, there should be no converging on the same location. And no slogans.

As their Facebook page noted, “We are not here to break the law or demonstrate or challenge the authorities, we are here to claim one of our simplest rights.”

Only women with valid international driver’s licenses should participate, organizers said. Many Saudi women drive when they travel and hold licenses from Egypt, Lebanon, Britain and the United States.

According to Saudi sources, Sharif was released on orders of King Abdullah bin Abdul Aziz, who has gained a reputation here as a supporter of women’s rights. Like many other officials, he has no objections to women driving.

The government’s problem, however, is a vocal constituency of conservatives, both men and women, who regard women driving as the litmus test in the government’s commitment to maintaining a Saudi life-style distinct from Western societies.

These opponents of female drivers justify their stance by quoting from ultra-conservative religious sheikhs who contend that women who drive are putting themselves into temptation to sin.

Sheikh Abdulrahman Al Barrak, for example, said: “Muslim clerics have declared women driving to be [forbidden] not because of the act itself … [of] turning the ignition. But allowing women to be issued licenses and be free to drive alongside men is a wide open door for evil and sin.”

Al Barrack added that the women behind the June 17 driving campaign are “Westernized,” and what they are planning “is a sin.”

No Saudi law prohibits women from driving. Rather, it is a social custom given a religious gloss by Islamic conservatives back in 1990 after more than 40 Saudi women drove around Riyadh for an hour to protest not being allowed to drive.

Those women were harshly punished — banned from international travel and suspended from their jobs. Mosque preachers called them “harlots.” Afterwards, to please religious conservatives, the kingdom’s top religious authority issued a fatwa, or religious ruling, that said women should not drive.

In the 21 years since, however, things have changed. Some religious sheikhs are speaking out against the hardliners, arguing that there is nothing in Islam preventing women from driving. They point out that in rural areas, Saudi women drive without interference and that in Prophet Muhammad’s time, women drove the transport of the day: camels.

In addition, critics note that hardliners are inconsistent: They forbid men and women from mixing, but then say it’s OK for a woman to be in a car alone with a male driver.

The tissue of religious justification, however, is wearing very thin, especially with a young generation of women. “It’s very simple,” said a woman who supports the June 17 driving campaign. “They don’t want us to be independent.”

Something else eroding the driving ban is that for many Saudi families, and divorced women, drivers are an economic hardship. In addition to a monthly salary ranging between $300 to $400, they have to be fed and housed. Most of these drivers are foreigners from India, Bangladesh, Pakistan and the Philippines.

One Saudi prince recently estimated that letting women drive would be result in an estimated 750,000 foreign drivers being repatriated and thus reduce the 8 million-strong expatriate worker population.

Households with several females means they have to adjust their schedules around a shared driver — unless a brother, husband or son is around to drive them to school, hairdresser, doctor and drug store.

Since there are no public transportation systems, women lacking drivers or relatives free to transport them have to depend on taxis. And these are often unreliable or unpleasant, smelling of cigarette smoke or lacking seat belts. The drivers don’t always know how to get to a desired destination.

In recent months, more and more women have been breaking the ban and driving themselves. Sometimes they get away with it. Sometimes they get caught. When that happens, they are brought to a police station until their male guardian — usually husband or father — comes to pick them up and is forced to sign a pledge that he won’t let her drive again.

This lenient penalty is why many women were preparing to get behind the wheel on June 17.

But that is now in doubt. In recent days, the Ministry of Interior has been informally putting out the word to women: We don’t care if you drive on June 15 or June 16 or June 18 but don’t even think about driving on June 17 unless you want to end up like Manal Al Sharif with an extended stay in jail.

The ministry’s mixed message reflects the government’s muddled stance on the matter as it tries to please two divergent constituencies.

It has already had an effect, with some women announcing that they have decided to drive on another day, not on the 17th.

They appear to see a detour, not a stop sign, in the road up ahead.