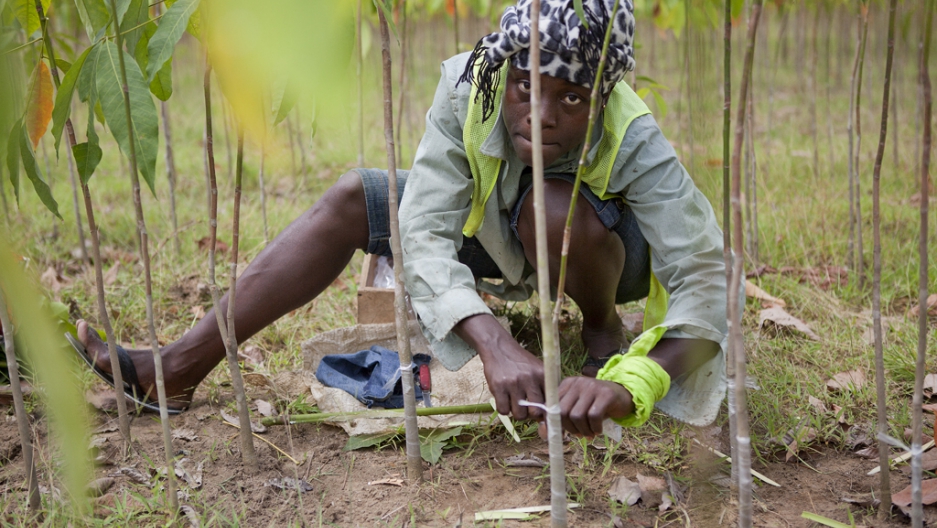 BUCHANAN, Liberia — The sun is high over the Buchanan Renewables nursery, a green expanse of 400,000 tiny seedlings. Theresa Doe hunches over one seedling, grafting a Malaysian clone that will produce a high-yielding rubber tree.

“It’s my living,” she says, her eyes fixed on the plant.

Doe and some 500 employees of this Canadian renewable energy company are growing Liberia's rubber trees and clearing non-performing plantations to help Liberia rejuvenate a sector of the economy that was deeply damaged in the country's 14 years of war.

Liberia’s rubber industry dates to 1925, when the Akron, Ohio-based Firestone Co. signed a 99-year agreement for 1 million acres at 6 cents an acre. During the war, the rubber industry languished, and only since President Ellen Johnson Sirleaf was elected in 2005 has the country drawn new investments in rubber.

“The heart of this business is the rehabilitation of the rubber industry. That’s largely what inspired us in the first place,” says Liam Hickey, general manager of Buchanan Renewables. “We felt it would be an excellent opportunity to rehabilitate what was once the most important industry in Liberia and have a tremendous impact on ordinary people’s lives.”

The environmentally-minded company grinds up tens of thousands of defunct rubber trees each year into biomass that it ships across the Atlantic to Sweden’s Vattenfall, one of Europe’s largest energy producers. This year it will offload 390,000 tons of woodchips, up from 95,000 tons in 2010, and aims to break even by 2013.

The company provides adult literacy and vocational training for its employees and has built orphanages and bus stops. Buchanan Renewables has rehabilitated many of the roads surrounding its operations in the eastern port city of Buchanan.

Using woodchips — which can be co-fired with coal — allows Vattenfall to dodge carbon taxes and help its customers comply with international emission protocols. The company purchased a 20 percent stake in Buchanan Renewables last year, with the option to take it over. Sweden’s private investment vehicle Swedfund, which makes risky investments in Africa and Latin America, bought a 10 percent stake.

At the Bright farm, a dense tropical forest opens up to a plain of felled timber splayed in every direction. Each day, some 1,400 rubber trees at this private rubber farm are cleared and hauled east to the commercial port of Buchanan. Rubber trees no longer produce latex after 30 to 60 years. The company buys tree trunks for $2 a tonne and leaves the farmers with the roots and small branches to burn for charcoal or sell as firewood.

Buchanan Renewables is working with large plantation owners like Firestone as well as about 50 smallholders to bring in the fellerbuncher — a giant pincer machine that uproots the trees and lays them in truck beds headed for Buchanan. A subsidiary, Farmbuilders, helps smallholders replant seedlings from the company’s nursery and secure financing for inter-cropping using future rubber sales as collateral.

Franklin Smith, 63, owns a 14 acre rubber farm near Buchanan. Unemployed, he could not afford to clear and replant the land, which was occupied by rebels during the war. Buchanan Renewables paid him $1,300 for the old trees and will clear the land and plant its high-yielding seedlings for free.

“Replanting is the part that I love because I do not have money to replant so we went into an agreement. They said they would replant and maintain it up to maturity,” Smith says.

Farmbuilders will introduce cash crops onto Smith’s farm to help him survive the seven years the trees need before they can be tapped.

“Whatsoever they can do for me to carry out my living I will be very happy,” Smith said, adding that if he hadn’t been approached by Buchanan Renewables, he would have used the wood to make charcoal.

Buchanan's Hickey is confident in the supply of old trees and the growing demand for biomass as countries aim to meet carbon emission standards. Buchanan Renewables estimates there are 615,000 acres of moribund rubber trees in Liberia, plenty to fuel a carbon-neutral, 36-megawatt power plant outside Monrovia and to ramp up the biomass export business. To fuel the plant, 3,000 to 4,000 acres of rubber trees must be harvested each year. When the company is operating the plant at 85 percent capacity and is exporting 700,000 tons of biomass a year, it will reach break-even. The company aims to expand production to 2 million tons of biomass a year by 2017.

Much of Liberia remains in the dark eight years after fighting ended in 2003. Only a tiny fraction of Monrovia’s 1.5 million people enjoy access to steady power, compared to near universal coverage before the war. Buchanan Renewables will sell to Liberia’s state-run electricity distributor almost four times as much electricity as Monrovia currently receives — enough to light half a million homes. Corporations are clamoring to receive the wattage and save on diesel-fuelled generator costs, which average 60 cents per kilowatt hour, compared to the 18.5 cents Buchanan Renewables recently negotiated with the Liberian government, said Hickey.

Three Britons betting on alternative fuels founded Buchanan Renewables in 2007 through the backing of a Canadian hedge fund. A year later, the company was bought by a Swiss hedge fund controlled by John MacCall McBain, a Canadian billionaire who made a fortune from classified advertising before selling his company and setting up a charitable foundation. McBain took to the idea after meeting Johnson Sirleaf at the Davos Economic Forum in 2007.

Buchanan Renewables’ $120 million investment represents an important stake in a country still struggling to provide the jobs and improved living conditions Johnson Sirleaf, who is running for a second term this fall, promised upon taking office in 2006.

“The questions that come up are less about how to maximize profit, and more about what is social good," said Buchanan Renewables president Don Durand. "By saying that, we’re not philanthropists; we’re here to make this sustainable and to make a fair return on investment, but the real passion behind that was to potentially rejuvenate a whole industry in Liberia that could rejuvenate the economy in a big, big way.”

Emily Schmall is a multimedia journalist now based in Monrovia, Liberia, where she serves as country director for New Narratives, a journalism mentorship project for young women. Wade Williams is a New Narratives fellow and an editor at FrontPage Africa, Liberia’s most widely circulated newspaper.