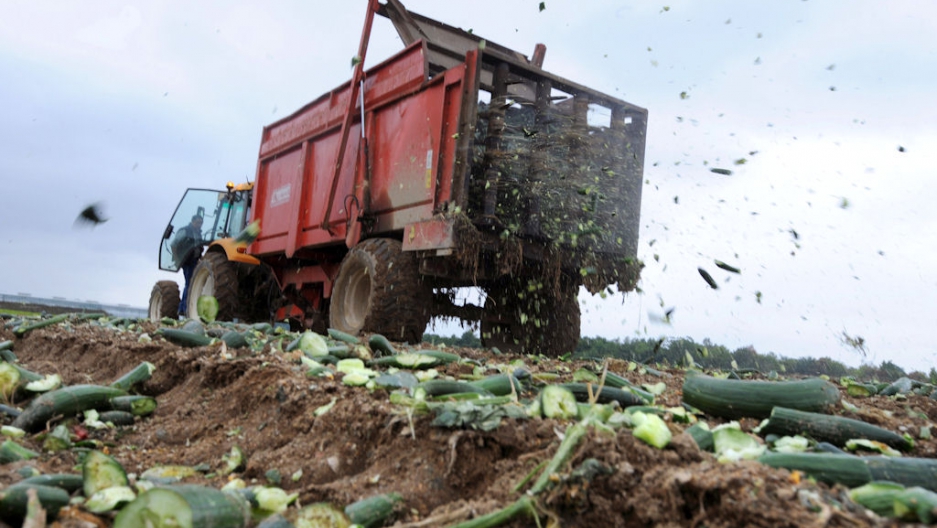 A tractor spreads destroyed cucumbers to fertilize a field, on June 06, 2011 in Carquefou, western France. Cucumbers sales collapsed on French markets due to the fear of E. coli contamination, even though the outbreak in Germany was eventually pinned on local sprouts.
Credit: Frank Perry
Share

BERLIN, Germany — German farmer Gunter Gassmann turns his back when asked his views on the recent E. coli crisis.

He’s joking — sort of. After he agrees to talk to a reporter at a farmers’ market in Berlin on a recent afternoon, he says the media bear some blame for the plummeting sales of fresh produce.

“It’s all illogical,” he said. “It’s been blown out of proportion.”

Other farmers are similarly wary, one refusing to talk because she had been misquoted already by a German newspaper.

And that’s just the German farmers. Spanish cucumber growers are furious at losing what they claim is more than 200 million euros a week after officials in Hamburg, more than 1,000 miles away, wrongly blamed them for the E.coli outbreak and the news spread across the continent like wildfire.

With the outbreak subsiding, leaving 37 dead so far, Germany and Europe are pondering how they coped with the crisis and what lessons can be learned. What is becoming clear is that globalization — of media, medicine, technology and trade — though a blessing in most cases, has its share of pitfalls.

The outbreak of the rare O104:H4 strain of enterohemorrhagic Escherichia coli (EHEC) stemmed from both old and new problems. The E. coli is now assumed to have come from a small, rather traditional organic sprout farm that mostly supplied a relatively local area. Though the operation is old-fashioned, the sprout seeds were, in the modern style, mostly imported from overseas. And the E. coli bacteria itself enjoyed the very 21st-century advantage of antibiotic resistance.

The facts of 21st-century food production mean that such outbreaks are becoming more common, experts say. Large-scale industrial farming and the widespread use of antibiotics, combined with globalization — the movement of both people and food — are driving the increase in such outbreaks, said Stefan Kaufmann, director of the Max Planck Institute for Infection Biology in Berlin and author of "The New Plagues: Pandemics and Poverty in a Globalized World."

“Infectious diseases are clearly re-emerging in general; they are appearing everywhere and, I think in most of these outbreaks, small or larger ones, human activity is at least partly responsible,” Kaufmann said.

Half of the world’s antibiotics are used on farm animals — not to treat disease but to make them grow faster. Because bacteria such as E. coli, which are part of the normal gut flora, are continuously exposed to these drugs, resistant strains emerge.

The mass movement of people, animals and food means these resistant strains are more likely to cross paths with other strains, including those that produce Shiga toxin, which causes the deadly hemolytic uremic syndrome that can lead to kidney failure.

The rare O104:H4 strain is just such a marriage of strains.

“The EHEC story tells us that there is more than just mutation and replication [of the bacteria.] They also exchange information sexually, just as my son not only has my genetic information but also my wife’s,” Kaufmann said. “And the bacteria are very promiscuous. That is responsible for a lot of the drug resistance and for new virulence factors, which cause disease.”

Frederic Vincent, the spokesman for European Health Commissioner John Dalli, said the commission was “worried” about drug resistance and planned to make proposals by October based on an upcoming report by the European Centre for Disease Prevention and Control and the European Food Safety Authority.

The other particular wake-up call from the consumer’s point of view is simply that vegetables can be killers as well as meat.

“Normally we don’t think that plants pose a problem for us,” Kaufmann said. “We know, both in the U.S. and in Germany, that hamburgers should be well-cooked. The lesson we learn from this is that not only meat, but also raw vegetables may be potentially threatening.

“We follow many precautions in animal farming, but not as many in vegetable farming.”

He said there needed to be more discussion of prevention, such as stricter controls of food production workers — similar to the kind of controls that exist for restaurant workers — and more widespread use of decontamination measures such as irradiation.

So has Germany handled the crisis well? Not when it came to communication, observers say. The most surprising failure was that, despite all the information technology at its disposal, officials were still using snail mail to notify federal authorities of suspected cases.

It typically took about a week for the federal authority, the Robert Koch Institute, to be notified of E. coli cases, because the hospital first had to notify state authorities who then passed the information on to the institute in writing.

“This clearly has to be changed,” Kaufmann said. “In a time when people Twitter and inform one another in real time, people know about it privately before the information has arrived at the Robert Koch Institute. ... The source would have been found faster with better reporting.”

At the same time, politicians in Germany were talking to the media, which undermined the European Union’s Rapid Alert System for Food and Feed (RASFF), through which member states alert each other of potential risks.

“We have to face the facts: It was in the press before the alert and the news reached Brussels,” Frederic Vincent said. “The Hamburg Minister of Health was publicly saying that Spanish cucumbers were suspected of being to blame. Then they sent the news to Berlin and then it made its way to Brussels.

“Everyone was commenting. Even though the Germans were doing their best, obviously on the co-ordination level there is room for improvement."

Not surprisingly, the media have received a share of blame — and not just from farmers. Stefan Etgeton, head of health and nutrition at the Federation of German Consumer Organizations said that the media had “not always been helpful” when it came to communicating risk without breeding panic.

For instance, after Hamburg authorities realized the E. coli they had detected on two Spanish cucumbers was not the O104:H4 strain, some media reported that Spanish vegetables had been given the all-clear, which was simply wrong, Etgeton said.

A survey released on Wednesday confirmed his view. Despite blanket coverage, less than a third of Germans said they felt well-informed about the crisis.