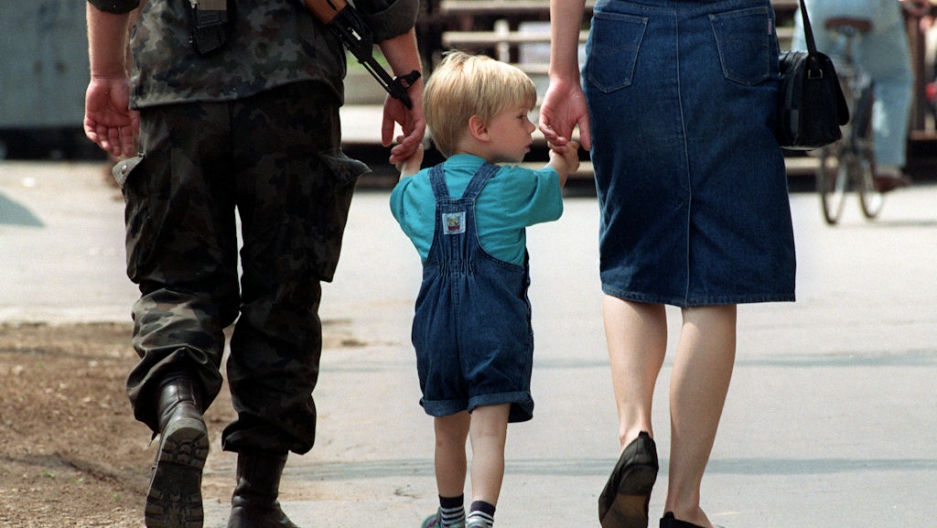 A little boy holds his parents' hands as they walk together in Ljubljana on July 6, 1991, after Slovenia declared independence from Yugoslavia and a ceasefire took effect, allowing Slovenian troops to spend time with their families.
Credit: Mike Persson
Share

GRAZ, Austria — Is the euro zone experiencing a case of "Yugoslav syndrome?" Economist Joze Mencinger thinks it might.

Mencinger, who served as Slovenia's economy minister just before its independence from Yugoslavia, describes the symptoms:

And you know what happened then: Political discord. War. Genocide. Except, of course, in Slovenia, which embraced independence and capitalism and is the first former Yugoslav member of the euro zone. So which path will the European Union take, now that a debt crisis is eating away at its countries' mutual trust and goodwill?

While Yugoslavia was a communist dictatorship rather than an association of democratic states, Mencinger says the parallel holds. In Yugoslavia, the Communist Party was free thinking and liberal, particularly in Slovenia. The Yugoslav central government's function was to arbitrate between squabbling republics. It worked because of a "democratic deficit," Mencinger said — in other words institutions that did not actually live up to their democratic promise.

The EU similarly functions thanks to a democratic deficit, Mencinger said. Like Yugoslavia, it maintains stability through "inertia, the ability to disregard its own rules, the constant creation of new institutions and empty talk." Negative as this sounds, these "strange pillars," he said, are "crucial in keeping EU together and, even more so, for enabling enlargement."

For example, he said, Italy and Belgium would never be part of the euro zone if the EU had stuck to its own rules on government debt, and there would be no Lisbon Treaty had it paid too much attention to public opinion. An EU Constitution was roundly rejected in referendums in France and the Netherlands in 2005, shortly before the broadly similar — but re-branded — Lisbon Treaty was adopted at the end of 2007.

Some of the EU's political taboos also seem familiar to a former Yugoslav. "In the '80s it was considered inappropriate to doubt the Yugoslav slogans of 'brotherhood and unity' or the 'identity of interests within socialist Yugoslavia,'" Mencinger said. "Now, it seems to be thought inappropriate to doubt the euro or the 'identity of interests in Europe.'" The idea of a "Europe of two speeds" — distinguishing the efficient economies of the north from the lagging south — is nothing new either, he said. In Yugoslavia the difficulties of drawing up policies that would satisfy republics with widely differing levels of economic development was justified by calling the country an "asymmetric federation."

The large economic "asymmetry" between the relatively wealthy Yugoslav republic of Slovenia and its fellow Yugoslav republics was among the reasons for its independence declaration in June 1991. And, just as there is no legal mechanism for a country to leave the euro zone, constitutional lawyers found cause to question the legality of Slovenia's withdrawal from Yugoslavia on the basis it agreed to join twice, first in 1919 and then again in 1945.

"Slovenia is a region of the EU rather than a country," having become an EU member in 2004 and the euro zone in 2007, according to Mencinger. It has handed over many of the economic attributes of a country, such as control over money supply, taxes, border control, and the ability to determine "the rules of the game," covering both formal and informal rules. Even so, he was in favor of Slovenia joining both the EU and the single currency zone and he does not wish to go back on either decision now, because it would result in "high costs and uncertainty."

Mencinger worries, however, that the EU and euro zone work better in good times than bad. He also doubts the effectiveness of the EU's attempts to restore Greece's debt-riddled public finances. The EU's assistance packages, he said, are only making things worse in Greece, while generating large profits for French and German banks. "The calculation is simple: if your debt is 160 percent of GDP and interest rates are higher than growth rate, the debt can only grow or be written off."

While there is no foreseeable end to the EU's woes, Mencinger does not think the union itself is near its end.

"The EU in 2011 is where Yugoslavia was in 1983," he said. "At that time, Yugoslav politicians were desperately looking for how to rescue the system and the country." He is hopeful that EU politicians will be more successful in finding a way for the EU to weather bad times or, if they cannot, that better times will come along and relieve them of the burden.

As a Keynesian economist who thinks the state should keep the private sector in check, Mencinger said he is not interested in the long run. Instead, he reckons that "the EU will certainly not last as long as Austria's Habsburg empire."