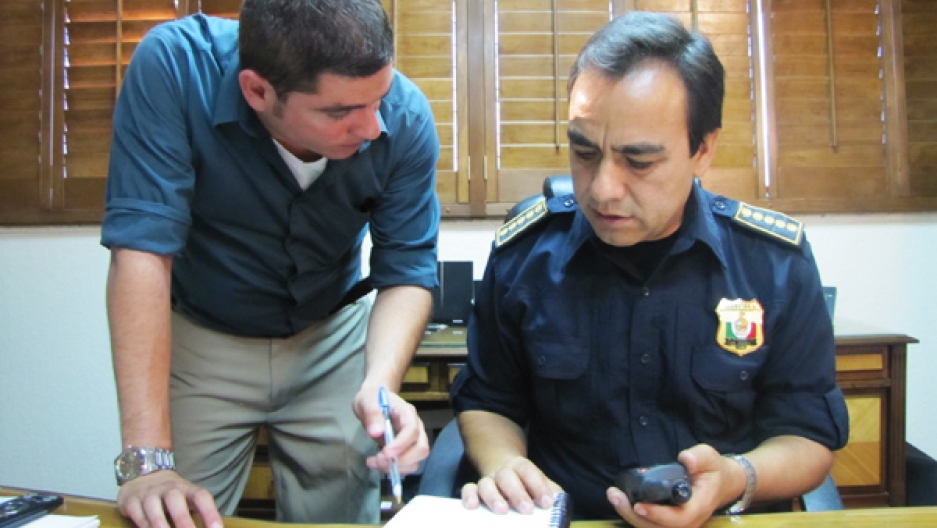 Share
By Monica Ortiz Uribe Hope is hard to come by in a city where the murder rate averages around seven people a day. This is the reality faced by residents of Ciudad Juárez, where three and a half years of unrelenting drug related violence has drastically transformed the lives of many. Now the city has a new police chief who promises to restore order in the city and win the trust of its citizens. Julian Leyzaola, a 51-year-old retired lieutenant colonel, graduated from Mexico's equivalent of West Point. He was sworn in as the municipal secretary of public safety on March 10. His arrival was much anticipated and many have high expectations of him. But most know him as Tijuana's controversial former police chief, where he earned the reputation as a tough crime fighter. He is credited with dealing a sizable blow against organized crime during one of Tijuana's most violent periods. At the same time, he is accused of human rights violations in his effort to rid the police department of corrupt officers. In Juarez, the two most immediate challenges Leyzaola faces are taking control of the police force and gaining the public's trust. One of the first actions Leyzaola took after his arrival was to hand deliver more than 2,000 paychecks to his officers and staff as a way to buy some face time with each of them. He didn't like what he found. "I found a police force with a very low morale, infiltrated by criminals," Leyzaola said in Spanish. As a result, about 170 officers are now out of the force. The chief fired those he suspected of corruption. Others resigned. Another 200 may go before the end of the year. Leyzaola says he won't hire a single officer until he feels he has significantly weeded out corruption in the current force. In total, the Juarez municipal police force has 2,300 officers. That number will drop as Leyzaola continues his cleansing of the department. The chief works out of a second floor office in Juarez's main police station in the southeastern part of the city. He has little more than a bowl of peppermints and a laptop on his broad wooden desk. There are no picture frames with smiling photos of his wife and three kids. His family lives in the United States for their own safety. Behind his desk, Leyzaola keeps a loaded rifle. His plan to recover Juarez is very militaristic. Leyzaola approaches the city like a battlefield. "I'm going to focus on small spaces where I can concentrate my forces and take control," he said. "Once I have control in one section of the city, I will move on to another and then another until I've recovered the entire city." Gaining control of Juarez is a serious challenge. Thousands of federal police and military have failed to accomplish this in the course of three years. Leyzaola said he doesn't expect people will start to see results until about a year from now. With the increased presence of military and law enforcement in Juarez has come an increase in reported human rights violations. Leyzaola himself is accused of torturing at least 25 Tijuana police officers he fired under suspicion of corruption. Gustavo de la Rosa Hickerson, the state human rights ombudsman in Juarez, maintains a close relationship with the controversial chief in an effort to monitor his actions. "Leyzaola comes to Juarez with a history of accusations of torture," De la Rosa said. "It seems as if he conducted a cleansing of the police department in Tijuana but wasn't very careful about how he did it." Leyzaola said he is against the use of torture. Nevertheless, he is currently under investigation by the Inter-American Commission on Human Rights. Since his arrival in Juarez, three municipal police officers have been charged with the forced disappearance of four young men in March. Those young men later turned up dead. De la Rosa says Leyzaola has cooperated with the investigation. Gaining the public's trust may prove just as challenging as gaining control over the police department. On a street corner in the eastern edge of Juarez, Leticia Salias sells fruit from an outdoor stand. She's in one of the most dangerous neighborhoods in the city. Last month, a police commander from a nearby station was shot dead in front of his house. A block away, an entire shopping center is boarded up and deserted. A few weeks ago, ten people were massacred at a bar just down the street. She said she trusts God to keep her safe, not the police. "Every day things are worse," Salias said in Spanish. "Everyday people are leaving the city, they've had enough." Salias is an example of how difficult it will be to convince ordinary citizens to turn to police to report crime. But without their cooperation, Leyzaola cannot succeed in one of Mexico's most dangerous cities.