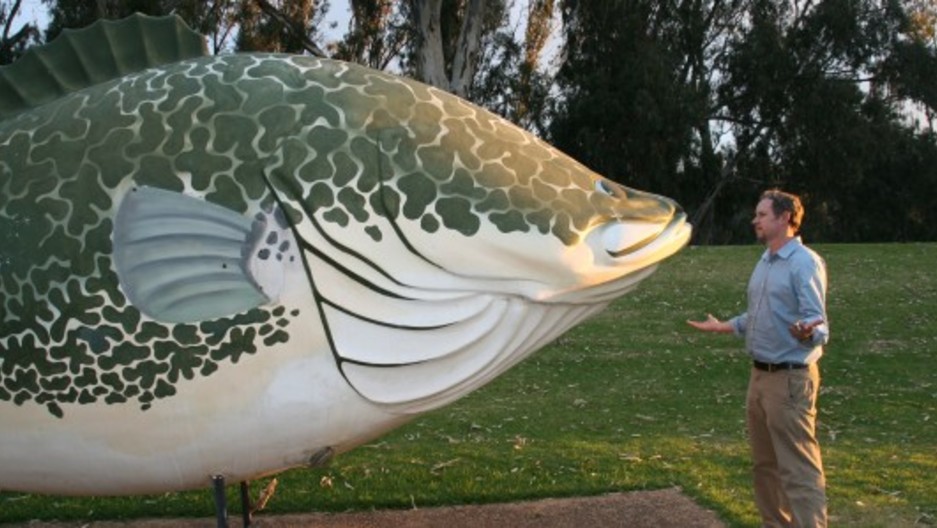 Share
Australia is a country that does thing big. In fact, there are 150 so-called "Big Things" scattered around Australia. They're big and colorful sculptures meant to lure would-be visitors off the highway. The World's Jason Margolis has personally seen some of them. The question for you is, can you name the town in Victoria that's famous for its strawberry farms? It's 160 miles north of Melbourne and its got one of those very big sculptures in the form of a strawberry.
Answer: Koonoomoo, Victoria, which was one the stops on Jason's tour of 'big things':
Australians do things big: big country, big personalities, and BIG THINGS.
Australians have built more than 150 “Big Things” – fiberglass sculptures alongside their highways, built to lure people for a stop at their town. There’s the big banana, the big pineapple, and the big pie, to name but a few. They were built to celebrate the local industry, or because, well, why the heck not?
I came across a few on my circuitous drive from Melbourne to Sydney. My first was the Big Cod in the small town of Tocumwal. This is where the Big Things Craze began. Almost.  The Big Cod was finished in 1968.
“Originally we were going to be the first very big thing.  But now, unfortunately, the big banana beat us from Queensland, because the fiberglass wasn’t ready in time,” said Sandy Sandy Hamilton. I met Hamilton and Velda Cole working at the Tocumwal Visitor Information Center.
I asked the two women if people have gotten over the sting of being second?
Hamilton: “I don’t think they have, do you Velda?”
Cole: “Probably not. But I think it was the first big fish.”
Sure, it was easy to poke fun at The Big Things. Too easy. And most of the Australians I met did too. I heard the words kitschy, tacky, and tasteless from the mouths of locals.
But Australians also expressed a love for their Big Things: warm childhood memories of stopping off at the Big Prawn on a family vacation.
And the two women at the visitor’s center in Tocumwal said the Big Things are more than just something to gawk at.  The Big Cod, which measures 33 feet in length, put their town on the map.
“We are very proud of our big fish,” said Hamilton. “And I know that there is another big fish somewhere along the Murray (river), but I’m not quite sure where that is actually. Ours is the big one.”
Onto the Strawberry
Hamilton sent me 15 minutes back down the road to see the Big Strawberry. Driving along, you couldn’t miss it: a 17-foot strawberry on the side of the road.
At the strawberry, I met Michael and Darren Hayes, the father-son duo behind the Big Strawberry.  Michael Hayes, the father, said erecting a massive fiberglass fruit on his farm was a simple enough idea: catch people’s eye while they’re driving, then give them a reason to linger at their strawberry-themed store and restaurant. He said business has take 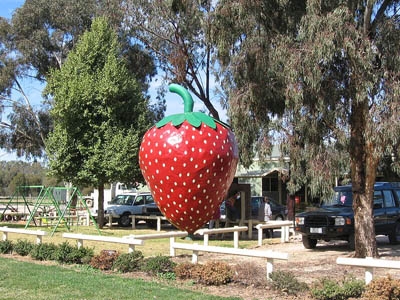 n off since he built the over-sized fruit.
“We stumbled on the strawberry pancakes, and that’s our highlight, our strawberry pancakes, which uses a lot of fruit. We started making jams, and condiments, and wines. And we sort of just got into a niche market that people want in their travels,” said Michael Hayes.
He said they thought about going bigger, but public liabilities were going “to kill” them. Darren Hayes, the son, added with a heavy dose of sarcasm, “Good old government policies.”
A Very, Very Big Sheep
You can’t get inside the Big Strawberry, but you can walk around the inside of the Big Merino in the town of Golburn. It’s a four-story sheep, constructed in 1984, built to pay tribute to the area’s woolen industry.
The Big Merino was a welcome diversion from a long and monotonous landscape (though I did drive past a massive tennis racket as well, by the way). The Big Merino wasn’t always so easy to spot from the road.  So a few years ago they moved it two blocks to be closer to the highway.
“One massive truck lifted him (the Big Merino) and brought him up to this site,” said Jenny Law, who works at the Big Merino gift shop.
She was there the day the sheep was moved. I asked her if she was nervous.
“Oh yes,” Law said. “I couldn’t eat my breakfast that morning.”
More Big Things Coming?
Here’s a question I had: where does all of this end?  Isn’t a 24-foot boxing crocodile or a 300-foot worm just a bit... too big? I put the question to Michael Hayes and his son Darren, the strawberry guys.
“Australians always want the big things, the bigger the better, and they keep outdoing each other, I think,” said the elder Hayes.
His son, Darren, countered, with a chuckle/snicker, “I think it’s an American thing, actually, because Americans always like big things. Everything has got to be bigger and better, bigger motors, bigger cars.”
Yea, yuck it up, tough guy. You’re the one who built a 17-foot strawberry.