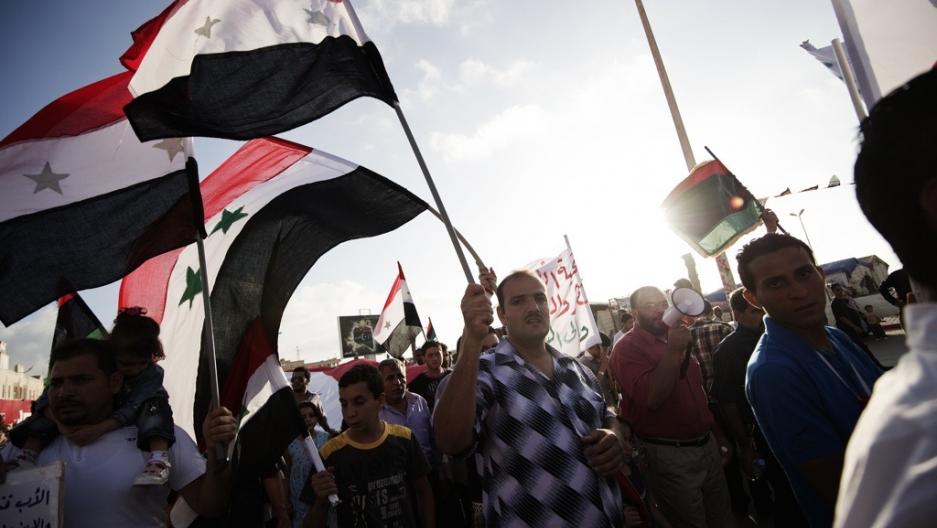 Dozens of Syrians hold up their national flag and anti-Syrian government banners as they demonstrate in support of the "Syrian uprising" on June 10, 2011, in Revolution Square in the Libyan rebel stronghold city of Benghazi.
Credit: Gianluigi Guercia
Share

As a non-conscripted sergeant-major, Satouf’s loyalty to the defence of his country ran deep, a belief that he was protecting Syria from its enemies abroad, primarily Israel.

So when the young man from the northwest countryside received orders to deploy to the port refinery of Banias to battle “terrorist armed groups coming from outside Syria, terrifying people” he didn’t hesitate to do his duty.

Until he realised he’d been lied to.

“When we went to Banias we didn’t find any terrorist groups. We found only peaceful demonstrations, some by women, others by young men and children. Some of the young men had bare chests. And all the chants were for freedom and reform,” he said.

On a video announcing his defection from the Syrian army, published on June 7, Satouf looks every bit the professional soldier: Well built, confident, steely eyed.

The video was shot by Syrian activists sheltering Satouf and passed to international rights group Avaaz, which vouched for its veracity.

Before giving his account, Satouf shows the camera his military ID and number. The video is one of five recent and credible accounts of defection given by members of Syria’s security forces.

Satouf describes how, after finding only peaceful protestors in Banias, he and his men were ordered to attack a nearby village, Kalaa al-Marqab, where he was told some 6,000 “armed fighters with sophisticated weapons” had gathered.

“But we didn’t find any fighters, nor armed people, nor any weapons at all,” he said. “We only found employees of the Public Institution for Antiquities, and the soldiers beat the employees.”

In neighbouring Marqab, Satouf describes how soldiers broke into homes and stole private property before arresting dozens of men, prompting women from the village to pelt the military convoy with stones.

“In response to the stone throwing, we were ordered to open fire,” he said. “And we had a massacre. Four women were killed.”

The troops were ordered back into Banias to face more “armed gangs.” But, by then, Satouf’s mind was made up.

“I have defected the army,” he says on the video. “What is taking place right now is haram [forbidden] They are killing my people, our brothers, whether they are Christian, Allawite or Sunni. We are in the army to defend them against the Israeli enemy. It’s not the job of the army to kill our people, our families.”

Sataf’s testimony gives a rare but dramatic insight into the cracks emerging in Syria’s security forces as the unrelenting assault on unarmed protestors continues.

On Saturday the military broadened its offensive in the northwest, using attack helicopters and tanks to pound Jisr al-Shaghour and nearby Maarat al-Numan, where activists said at least 23 people were killed by tank shells. An activist in Maarat al-Numan said he witnessed helicopters attack the local State Security branch.

There were no confirmed casualty figures among Jisr al-Shaghour’s 50,000 residents, the majority of whom fled before the assault. By Saturday evening, at least 4,000 Syrians had crossed into Turkey, whose prime minister, Recep Tayyip Erdogan, said Syrian President Bashar al-Assad, who he once described as a “brother,” had acted with “savagery” against his own people.

And heavy shelling and gunfire continued Sunday. According to the Guardian:

The bombardment has reportedly left much of the city in ruins. Farmland to the north has been torched and residents hiding in the mountains say they have been joined by almost all who had remained behind.

Gunfire was also heard in other cities across Syria, including Homs, where tanks had moved into restless areas including the neighbourhood of Baba Amr on Wednesday, and the coastal city of Latakia.

Corroborating accounts from residents of the area indicated that the military offensive against the civilian population of the northwest followed a shoot out between members of the military secret police in Jisr al-Shughour, some of whom refused to open fire on unarmed protestors.

Speaking after crossing into Turkey on Friday night, an activist based in Jisr al-Shughour and trusted by experienced local reporters described how a funeral on June 4 for a man shot dead by plain clothes security grew into a large anti-regime protest.

“As the demonstration passed the headquarters of the military secret police they opened fire right away and killed eight people,” said the activist, who was among the crowd. “But some of the secret police refused to open fire and there were clashes between them. It was complete chaos.”

The following day the activist and others went back to the military police building having heard explosions coming from the area the evening before. They found dozens of bodies, including that of the military police chief, identified by his ID card.

All foreign media is banned from reporting in Syria so it is impossible to verify the account firsthand, though it tallies with other testimonies from residents of the area that clashes between security forces had taken place on June 4.

Since then, Assad has sent scores of tanks and thousands of troops into northwest Syria, with the military, thought to be led by Assad’s brother Maher, vowing to “restore security” after it said 120 security men were killed in Jisr al-Shaghour by “armed gangs.”

However, state-run Syria TV admitted that gunmen “in military uniform” were responsible for the killing of the 120 security personnel, with SANA, the official news agency, claiming the gunmen had stolen military uniforms and that residents were now pleading for the army to intervene.

“It’s tragic. They have burned down all the crops and the villagers are fleeing,” said a resident of Jisr al-Shughour, who fled on Friday with four people injured by the military assault, heading to the Turkish border. He said he had witnessed the army opening fire on fleeing villagers with machine guns.

“All the accusations of residents sheltering gangs are false,” said the Jisr al-Shughour resident. “And we never asked the army for help or to enter our town. It is them firing on us.”

Residents also reported attacks on Al Serminiyye, a village three miles south of Jisr al-Shaghour and on Ariha, 20 miles to the east. In Binnish, following a large anti-regime demonstration, state TV reported that the town was harboring 100 armed men.

“We haven’t witnessed anything like this,” said an activist in Binnish. “We fear they will use this as an excuse to attack Binnish like they did Jisr al-Shaghour.”

In the early 1980s, former President Hafez al-Assad, Bashar’s father, ordered a military assault on Jisr al-Shaghour in order to crush a revolt in northwest Syria by the Muslim Brotherhood. In Hama, 30 miles south, Syrian troops massacred between 10,000 and 30,000 people.

White House spokesman Jay Carney strongly condemned the military assault in northwest Syria as an “outrageous use of violence.”

Hezbollah, the Iranian-financed Lebanese militant group, denied media reports that some of its members had been killed in the violence in northwest Syria. U.S. President Barack Obama has made repeated assertions that Iran is providing training and equipment to the Syrian regime to aid its crackdown.

The military offensive, at least the fifth such large-scale operation following assaults on Deraa, Lattakia, Banias, Homs and Tal Khalakh, appeared to be exacerbating tensions in the army, made up of mostly Sunni conscripts commanded by an officer corps drawn mainly from the minority Allawite sect, to which President Assad and most ruling elites belong.

On Saturday, news broke that a lieutenant colonel had defected with a number of his troops and joined residents of Jisr al-Shughour, according to an activist, an account corroborated by reporting from the Local Coordination Committees of Syria (LCC).

The activist said the lieutenant colonel defected during an operation in Bdama village, six miles west of Jisr al-Shughour, taking 150 armed troops with him to support the besieged town.

In a video published on June 10, a man claiming to be an officer in the army announced his defection, saying he and other soldiers had joined the uprising after being unable to continue killing unarmed protestors, particularly what he called the “massacre” in Jisr al-Shaghour on June 4.

“Our current aim is the protection of the protestors who are asking for freedom and democracy,” said the man, giving his name as officer Hussein Harmoush. He is believed to have crossed the border into Turkey.

Harmoush called on soldiers to “protect civilians and property as well as government buildings from the criminal elements led by Bashar al-Assad and his regime.”

Those sentiments were echoed in testimony from Waleed Qashami, whose military ID shows him to be a member of Syria’s Republican Guard, an elite division assigned to the protection of the capital, under the command of Maher al-Assad, the president’s brother, who also commands the Fourth Division.

Speaking to Amnesty International by phone from the country where he is now taking refuge, the 21-year-old said he was among 250 soldiers sent to quell a protest in Harasta, a suburb of Damascus, on April 23.

Qashami’s officer told him he was there to confront a “violent gang.” But what he found was about 2,000 unarmed protesters, including women and children. As in Banias, many of the men went bare chested to show they carried no weapons.

“We were surprised that the secret police and security opened fire with live ammunition on the demonstrators without any reason, on women and children,” said Qashami in video testimony.

“We in the Republican Guard took an oath to protect the country, its citizens and leader, not to betray the country … We saw no armed gang. We didn’t even see anyone carrying a knife.”

Hugh Macleod and Annasofie Flamand reported from Beirut, Lebanon with reporters in Syria.