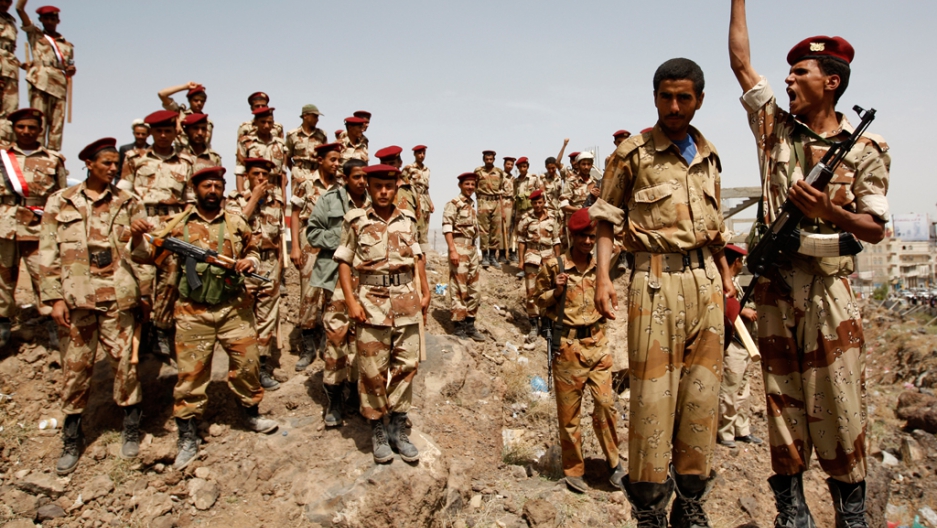 A Yemeni soldier shouts slogans as others who joined sides with anti-regime protesters gather, during a demonstration demanding the resignation of Yemeni President Ali Abdullah Saleh, in Sanaa on June 10, 2011.
Credit: Ahmad Gharabli
Share

SANAA, Yemen — The United States has sent an FBI forensics team to Yemen to investigate the attack on the compound of President Ali Abdullah Saleh that seriously injured the president, forcing him to leave the country last week.

“The FBI is aiding Yemeni law enforcement in their investigation in the attack on the presidential compound. The FBI team arrived in Sanaa last Wednesday,” said a senior Yemeni government official, speaking on the condition of anonymity because he is not authorized to speak to the press.

The arrival of the FBI team, which came at the request of the Yemeni government, underscores the close relationship the United States and the Saleh administration continue to maintain, despite a months long uprising and subsequent violent crackdown by government security forces that have killed hundreds of peaceful protesters.

Yemen, the home of Al Qaeda in the Arabian Peninsula, an Al Qaeda offshoot that is responsible for a number of attempted attacks against the United States, has for years been an important ally of the United States in the fight against religious extremism.

Although it was originally assumed that the attack on Saleh’s compound was carried out by a rival tribe that had been fighting government forces for several weeks, the Yemeni official said the FBI has determined a number of other possible suspects, including Al Qaeda and members of Saleh’s inner circle.

“They are concerned about how the attack was carried out. Everyone is a suspect,” the Yemeni official said, adding that the FBI team is expected to complete its investigation by the end of next week.

Wounded in the rocket attack, which took place on the afternoon of June 3, Saleh fled to Saudi Arabia for medical treatment. Although rumors of his return persist, many analysts believe that the president is gone for good.

The ensuing chaos has provided an opening for both tribal fighters and Al Qaeda to assert themselves in some parts of the country.

The FBI’s arrival in the Yemeni capital comes as the United States steps up its covert military campaign against Al Qaeda cells in the southern Yemeni governorate of Abyan. The United States has been using airstrikes and unmanned drone attacks in its attempt to kill the American cleric Anwar al-Awlaki, the leader of Al Qaeda in the Arabian Peninsula, and other top Al Qaeda members based in Yemen.

Al Qaeda in the Arabian Peninsula is now engaged in a guerrilla war against the Yemeni government in Abyan. Militants have begun flocking to Abyan in support of Al Qaeda, which last week captured Zinjubar, the provincial capital, and announced the establishment of an “Islamic Emirate.”

But according to some analysts, the U.S. interest in the attack implies that there is some possibility that Al Qaeda was behind it.

“The Americans will come to the aid of Yemen if they are asked. However, it is important to note that if there was even the slightest possibility that Al Qaeda was involved in the attack, the U.S. would take an extreme interest and, if they could, become involved in the investigation,” said Abdul Ghani Al-Iryani, a Yemeni political analyst.

“They Yemeni government has said that it believes Al Qaeda was behind the attack,” he added. “And it is quite possible.”