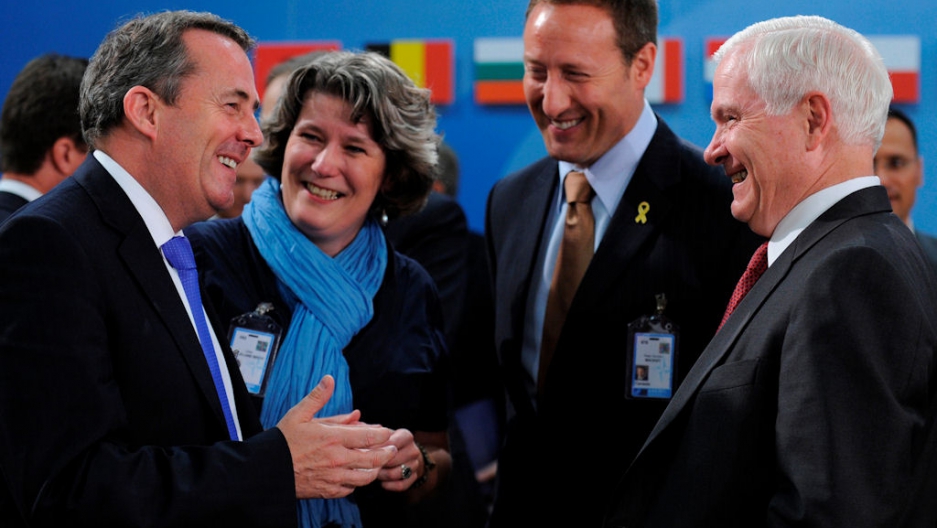 In a farewell speech before an audience of NATO and European Union dignitaries and defense scholars, the U.S. defense secretary said he wanted to share some “parting thoughts” after almost five years in the job. He started with sentiment, saying that “The security of this continent — with NATO as the main instrument for protecting that security — has been the consuming interest of much of my professional life.”

Then the “parting thoughts” became parting shots. By the end of his speech, he had portrayed America’s NATO partners as tight-fisted, short-sighted and frittering away the future of the organization.

The alliance has “serious capability gaps and other institutional shortcomings,” Gates said, “laid bare” yet again by the current operation in Libya, which NATO hails as a resounding success and example of how the Europeans can manage just fine without Americans in the lead.

Gates reminded the audience that the decision to enact the United Nations mandate to protect civilians in Libya was taken, as all NATO decisions are, by consensus among the 28 members. Yet not even half are active in Operation Unified Protector and less than a third are also willing to participate in air strikes.

Those numbers are “regrettably small,” said former NATO Secretary General Jaap de Hoop Scheffer, echoing Gates. “This imbalance in burden-sharing is not sustainable in a world where projecting stability is the order of the day.”

De Hoop Scheffer said he hoped solidarity would prevail and more countries would join the Libya operation and that those who could join, would perform air strikes. “That goes very much for my own nation as well, the Netherlands,” he said.

But De Hoop Scheffer acknowledged that, at present, “Europe has a rather pale face in this regard” and indeed, Gates’ lobbying over the last two days for more contributions received a wan response. Germany, which opposed the operation from the beginning despite finally granting its vote, announced at NATO’s ministerial meeting earlier this week that it would continue to stay out of the military action.

But for many allies, Gates explained, it’s not that they don’t want to help— it’s that they can’t.

“In particular,” Gates said, “intelligence, surveillance and reconnaissance assets are lacking, which would allow more allies to be involved and make an impact. The most advanced fighter aircraft are of little use if allies do not have the means to identify, process and strike targets as part of an integrated campaign.”

Targeting specialists had to be brought in from the United States, and even with that infusion Gates said only about half of the sorties the operations center would be capable of launching are actually being flown.

Beyond Britain and France, which spearheaded the air strike campaign against the regime of Libyan leader Muammar Gaddafi, Gates singled out Belgium, Canada, Denmark and Norway as partners — “exceptions” — who are punching above their weight in the Libyan operation, despite drastic budget concerns.

A warning Gates has long issued is that NATO risks becoming a “two-tiered alliance,” in which some countries invest in their capabilities and are willing to use them and some do not. Now, he said, he would no longer call it a risk.

“We are there today,” he said sternly. “And it is unacceptable” that some members bear the burdens and others reap the benefits of NATO membership, “be they security guarantees or headquarters billets.”

Indicating that he’s had enough of that, Gates predicted American taxpayers aren’t going to take it anymore either.

“If you told the American taxpayers — as I just did! — that they’re bearing 75 percent of the financial burden of the alliance, this is going to raise eyebrows,” he said.

He noted that he is the last senior leader in Washington who is a “product of the Cold War.” Young new members of Congress, Gates said, “do not have the formative experiences that I have had … the kind of emotional and historical attachment that American leaders have had for this alliance” and are going to let U.S. national interests dictate their decision making.

“The blunt reality is that there will be dwindling appetite and patience in the U.S. Congress — and in the American body politic writ large — to expend increasingly precious funds on behalf of nations that are apparently unwilling to devote the necessary resources or make the necessary changes to be serious and capable partners in their own defense,” he said. He said he hoped the sharp warnings he delivered “will get the attention of European leaders who realize that the drift of the past 20 years can’t continue, not if they want to have a strong transatlantic partnership with the U.S.”

NATO scholar Sarwar Kashmeri said Gates might be overly optimistic about the power of his words. A senior fellow at the Atlantic Council, Kashmeri recently published a book called “NATO 2.0: Reboot or Delete.” He doesn’t think Gates’ remarks will have the resonance the secretary hopes — or that they should.

Member state governments won’t be receptive to the pressure, Kashmeri said, because the economic constraints they’re feeling are as acute as Washington’s. In addition, “American pressure is simply not what it used to be,” he said, “because there is no longer one threat — the Soviet Union or a replacement for it — that crystallizes European minds when America speaks.”

Kashmeri also said some of the helplessness that Gates cited is actually America’s fault.

He advocates for the United States to pull back its support in NATO, not just threatening to do so. In the case of Libya, Kashmeri said, “Maybe it would have taken longer to destroy Libya’s air defense systems without some of the sophisticated American weapons, but there is no way that Libya, a minor military power, could have prevailed.”

In researching his new book, Kashmeri asked more than 50 military experts from both Europe and the United States if Europe could handle its own defense and security, if required.

“Almost universally the answer I got was ‘yes, if we had the will,’” he said. “I do not believe the Europeans will ever get that will as long as there is an American defense credit card that they can draw on.”