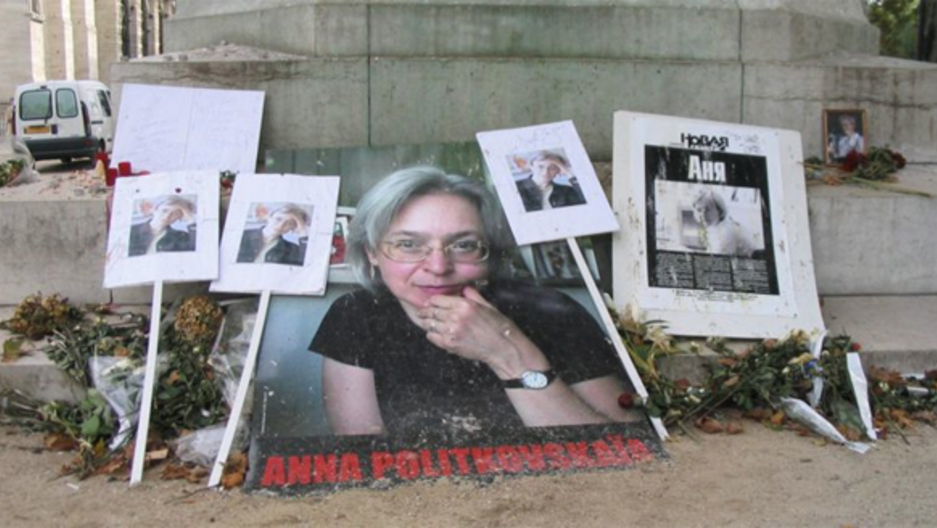 Posters with photo of journalist Anna Politkovskaya assassinated in Moscow in 2006.

Share
It was top news all over Russia. Police said they finally arrested 36-year-old Chechen Rustam Makhmudov for being the triggerman in the 2006 high-profile shooting of prominent journalist Anna Politkovskaya. Politkovskaya extensively covered the war in Chechnya and was often critical of the Kremlin and its alleged human rights abuses. Polikovskaya's former colleague Sergei Sokolov, deputy editor of Novaya Gazeta, called the arrest a "development in the case" but he questioned the timing. He says he wonders why it took the police so long to capture the suspect Sokolov was also quoted in the Russian media as saying that, "he'd be very interested to know how the suspect managed to leave Russia and come back from his journey while his name was on the international wanted list." Sokolov's own newspaper is less circumspect. It investigated Politkovskaya's murder and has implicated the Russian Security Service. Politkovskaya's son, Ilya, says the government has a long way to go before Russians believe the arrest of his mother's killer is anything but political. Politkovsky says we have to wait and see if Makhmudov's guilt will be proven. But even that won't even be enough. We need to know who actually masterminded my mother's murder. The arrest of Politkovskaya's supposed killer isn't the only police action lately. Just a few weeks ago, a court jailed a Russian nationalist for life, for the brazen daylight murder of another Novaya Gazeta reporter and a human rights lawyer. "There's a lot of coincidences these days," said Anna Sevortian, head of Human Rights Watch in Moscow. "We might expect new things flooding the informational context of political life in Russia just because the elections are looming." The Kremlin disputes accusations that political posturing is going on. Officials have consistently claimed they're committed to solving the cases of slain journalists. They point to the recent arrests and convictions as examples. Andrei Kortunov, with the New Eurasia Foundation, says even if the Kremlin's renewed interest in crimes against journalists is a pre-election ploy, perhaps it's not such a bad thing. "We're entering a new political season, so (the) state is get(ting) more sensitive about journalists," said Kortunov. "Still, these current prosecutions suggest that state is ready at least to listen to voices which raise concerns about the state of the profession in Russia."