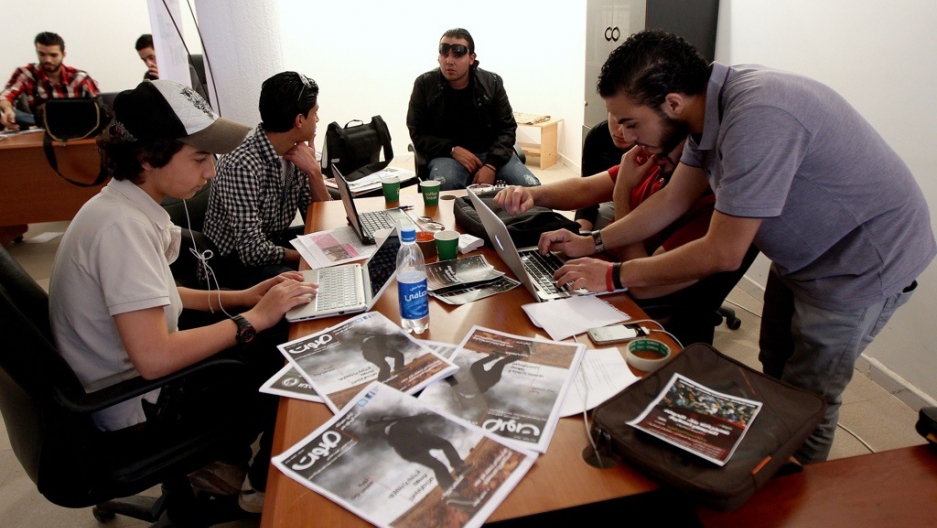 Libyan youths gather to discuss subjects to be published in the new weekly newspaper al-Sawt 'The Voice' in Benghazi on April 14, 2011.
Credit: Marwan Naamani
Share

Before Libyans in Benghazi started taking to the streets, and before a rebel army was raised, Libyan leader Muammar Gaddafi held a tight grip on the media.

But these days, the atmosphere in Benghazi is very different. Arab News, an English-language daily based in Saudi Arabia, reports that dozens of new newspaper of all different stripes have emerged since the rebels took control of Benghazi in February. A month after the rebel takeover, about six new newspapers were being published, most of them in support of the revolution. Now there are more than 80 new titles, almost all of them weekly, ranging from the political to the comical.

Many of the papers are being published out of a single "newsroom" of sorts inside a makeshift media center set up across from the ruined Benghazi courthouse. Reporters, editors, photographers and publishers of the different papers jockey for space and although chaos, Arab News reported, seems to reign, they all still get out on the street on time where jubilant newspaper sellers are overwhelmed by the cultural shift.

In Tripoli, the country's capital, however, a very different reality persists.

The Gaddafi regime is still very much in control and, as such, still controls the media. Foreign reporters are coralled inside the very fine Rixos Hotel and are fed government press conferences or orchestrated — if often bungled — tours to sites around the city. Locally, all the press in Tripoli is state-run.

In 2010, Reporters Without Borders ranked Libya 160th out of 178 on its press freedom index.

Reporting from Tripoli means reporting from the Rixos Hotel. And it is near impossible. Journalists are told things that border on the absurd. A Guardian reporter said the foreign press corps at the Rixos was told by a government spokesman at one point that there had been no attack on the city of Misurata, despite the fact that several Guardian journalists (among many others) were there and saying something quite different. Two photographers, in fact, were killed in that bombing campaign.

"Armed men and intelligence officials guard its gates round the clock," said Channel 4's Jonathan Miller, referring to the Rixos Hotel. "We can only leave with government minders, to see things the government wants us to see."

The degree of control is, however, in itself a window into the paranoia of the Gaddafi regime and the oppression with which it has ruled now for more than four decades.