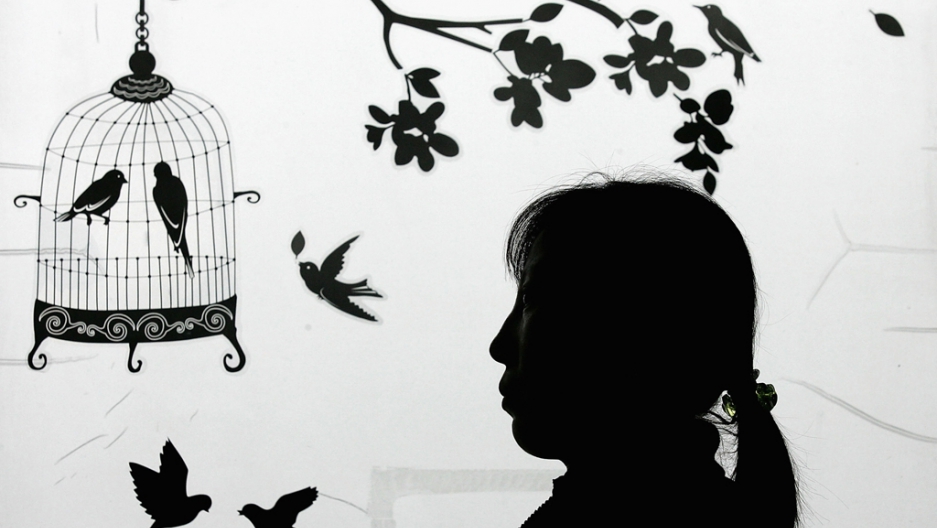 A North Korean asylum seeker who is now an anti-North Korea activist is pictured at an office in Seoul, South Korea, on Feb. 14, 2009.
Credit: Chung Sung-Jun
Share

BANGKOK, Thailand — In the beginning, they arrived in ones and twos across the Mekong River. They were dirty, skeleton-thin and scared to death.

Sugint Dechkul, a small-town lawyer in Thailand’s far-northern Chiang Rai province, had no idea what to make of them. They’d wander up the riverside country road near his home, sometimes begging for food or shelter in an alien tongue.

“We’d ask, ‘Where are you from?’ They couldn’t answer,” Sugint said.

Finally, through painstaking pantomime, one of the stragglers conveyed his origins. North Korea. Nearly 3,000 miles away.

That was nine years ago. Today, the so-called “underground railroad” traveled by North Korean defectors increasingly terminates in Thailand.

In recent years, North Korean defectors’ network has discovered Thailand is the gateway to their dreams: resettlement in Seoul, South Korean citizenship and thousands in cash to start life a new life. Though this tropical nation is distant from the often chilly Korean peninsula, it is the nearest reachable ally of South Korea, which maintains a policy of financially aiding and patriating its divided kin.

“The first ones looked like they hadn’t showered in a month,” Sugint said. “My children begged us, saying ‘Mommy, Daddy, you have to help them.’ Now they come in big groups with kids on their back. They know their way and they know what they’re doing.”

The journey to Thailand can take months and the path is lined with informants and extortionists. Capture in neighboring China means certain deportation and quite possibly execution. If not killed, those returned to North Korea can expect slave labor in a string of camps believed to hold 200,000 prisoners.

But for North Korean defectors such as Joseph, who grew up starving under dictator Kim Jong Il’s regime, the alternative was slowly wasting away on a family farm.

“We were starving,” said Joseph, using his English-language pseudonym. “So many people back home had died.”

Many escapees flee when the Yalu River, dividing China and North Korea, freezes over in winter. But Joseph’s family simply found a shallow bend to swim across. They hoped that border guards would not spot them and fire their Kalashnikov rifles.

Against the odds, they linked up with an underground Christian network managed in part by former defectors. Joseph, then 13, was taken aback by his first spoonfuls of pork and chicken while he was hiding out at a Chinese safe house.

“I had never really heard of these animals,” he said. A Chinese couple who sheltered his family at the risk of long prison terms also offered him a slice of birthday cake. It was spongy, sweet and somewhat repellant. “I didn’t like it at all. I had only eaten rice and vegetables that my parents grew.”

Along with cake, the family who housed them introduced Joseph and his family to another foreign concept: Jesus.

“No one in North Korea knows about Christianity,” he said. “But they told me about it and I was saved. I know now that God had helped us many times.”

Christianity, practiced by roughly one-third of South Koreans, is the de facto faith of the so-called “underground railroad” network, said a long-time activist with more than a decade’s experience on the circuit.

Despite several stints in Chinese prison, a U.S.—based South Korean native — who wished to remain anonymous due to fear of punishment by the Chinese government — said he still helps with escapes funded by donations raised in America. He also claims to have branded these routes the “underground railroad,” a nod to escape trails used by American slaves in the 1800s.

“When they first get out of North Korea, they look really shabby and skinny,” he said. “We make them stay at a church member’s house for a month, just to eat.” It usually takes a month’s worth of steady meals, he said, to put meat on their bones.

“After eating, they look more or less Chinese and we can put them on public transportation,” he said. ““We give them new clothes, new shoes, sometimes fake Chinese IDs.”

In the 1990s, the network had luck shuttling North Koreans along a 15-hour bus route to Mongolia. This method was cheap, he said, costing the network only about $500 per refugee.

But the Chinese clamped down and fortified the border with guards and spies. Networks have since shifted towards southwest China, where state control is a bit looser, and into bordering nations such as Vietnam, Laos and Burma. From there, many hope to reach Thailand.

These routes expose escapees to more than a week’s worth of bus and train rides riddled with random checkpoints. The totalitarian regime in Burma, and communist-ruled Laos and Vietnam, have proven largely unsympathetic to North Korean refugees.

“My family made it to Laos, but we were caught,” Joseph said. “We tried to say we were South Korean missionaries, but they didn’t believe us. We had no passports or South Korean money.”

Mercifully, they were only bounced back to China. The family was later spirited into Burma near treacherous jungles controlled by the United Wa State Army, a heavily armed ethnic militia funded largely by methamphetamine production.

Again, Joseph and his family were caught by police. But somehow, he said, a South Korean diplomat found them in a Burmese prison, paid for their release and brought the family to Thailand under the South Korean government’s care.

Joseph is now 24 and working for a Seoul-based network, Durihana, that aids fellow North Korean defectors. Born into severe malnutrition, he stands only 4’11." “I’m still pretty skinny,” he said.

“Thailand is different from the other countries,” said the veteran U.S.-based activist. “They don’t exactly welcome them because they’re illegal entrants. But the refugees know if they surrender, they’ll be safe in a detention center and handed over to the South Korean embassy.”

According to figures obtained by the Bangkok Post newspaper, Thailand’s immigration police detained only 46 North Korean illegal migrants in 2004. But last year, according to their figures, police processed nearly 2,500.

“I know it’s a human rights issue and, in my heart, I like to see them get help,” said Gen. Pansak Khasemasanda, a senior-ranking member of Thailand’s immigration police. “But whoever comes illegally, even if they’re North Korean, has to follow the law.”

“The burden lands on us,” he said, “because they sleep right in this cell over here.”

North Koreans who reach Thailand, however, are almost guaranteed support from South Korea. Once vetted, they’re released at a less intimidating Thai border — Bangkok’s chief international airport — with a light fine and a plane ticket to Seoul purchased by the South Korean government.

What follows is interrogation by South Korea’s CIA equivalent, months of rehabilitation and release into society with an initial payment of roughly $3,000, according to sources in the defectors’ network. About half of that payment is often owed to the network that funded their months-long escape.

Despite repeated enquiries, South Korea’s Bangkok embassy would not discuss their system of aiding North Koreans caught in Thailand. At Bangkok’s North Korean embassy, a man who answered the main line became irate when the subject was raised.

“Maybe you should just talk to these brokers because they’re the ones who allow these actions,” he said before hanging up.

“For a little money, I think, a Chinese border guard might close one eye,” he said. The less fortunate have to take the old-school route: plodding the jungles of Laos undetected.

As they did nearly one decade ago, refugees continue to drift across the Mekong River at a port near Sugint’s home office, he said. But they are seldom as panicked and ragged as they once were.

He recalled a refugee years ago who was held at a police station for several hours until a bewildered cop, unable to communicate with the detainee, rolled back the cell doors and signaled for him to walk out. The frightened man gripped his seat and refused to budge.

“Now, they seem more relaxed, look clean and can even speak a little Chinese,” said Sugint, who has made a hobby of helping them fall into police custody safely. He’s even prodded his son to learn Korean and serve as the family’s pro bono translator.

“They’ve actually have money on them now,” Sugint said. “The first thing they want are cigarettes and a phone card to start making calls.”