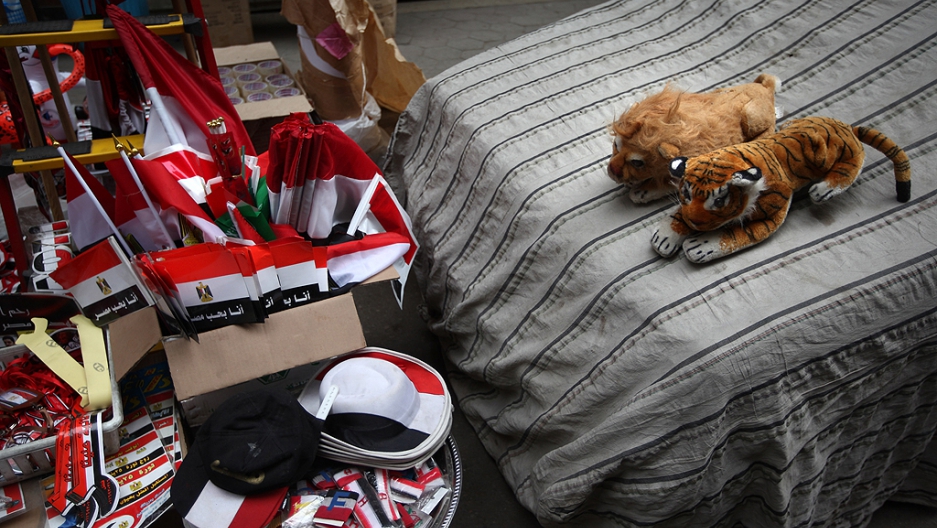 A toy lion and tiger sit on a car next to a shop selling flags and hats near Tahrir Square on May 27, 2011 in Cairo, Egypt. Tourism is yet to return to pre-uprising levels.
Credit: Peter Macdiarmid
Share

Al-Sayed al-Essawy realized his life goals at an early age.

"I discovered my incredible strength at the age of 13, and, almost immediately afterwards, promised myself that, one of these days, I would fight a lion," al-Essawy told the popular Al-Masry Al-Youm newspaper in a recent interview.

Al-Essawy, a 25-year-old from the northern Delta region, also told Al-Masry Al-Youm that Egypt's recent revolution inspired him to do something positive for the country's sluggish economy.

Egypt's economy, which had already been stagnating under the three decades of rule by Hosni Mubarak, has been in a slump following the ouster of the former president on February 11.

The tourism sector, a traditional breadwinner for the Arab world's most populous nation, was the hardest hit in the wake of a perceived sense of post-revolution insecurity in Egypt.

Fewer tourists in the country means revenue could drop by around 35 percent this year, according to figures reported recently by the Los Angeles Times.

Al-Essawy, the self-proclaimed "strongest man in the world", believes that a caged lion-fight with the world-famous Pyramids of Giza as a backdrop could help fix Egypt's economy.

"Do you understand what an amazing spectacle this will be?" asked al-Essawy, according to Al-Masry Al-Youm. "It will appeal to everyone. The Gulfis will watch and laugh, the Arabs will be entertained, and the Americans will be fascinated, from a scientific point of view. They will marvel at a truly unprecedented feat. This show will have something for everyone."

But not everyone is as amused as Al-Essawy appears to be. Environmental activists have criticized his purchase of a lion listed as "vulnerable" on the UN endangered species list for a reported $4,200.

"While many eco-tourism options are inviting, this most recent plan to fight an endangered animal species in public will only further alienate potential tourists," reported the Green Prophet, a Middle East-based environmental blog. "The gladiators have been dead a long time. Let’s leave it that way."

Egypt's Ministry of Tourism has ignored al-Essawy’s application for a fight permit, according to the Green Prophet.

Al-Essawy appears confident, however, that the "life or death" battle will still take place.

Aside from boosting Egypt's economy, he believes the fight will send a clear message to U.S. and Israeli audiences.

"When I defeat the lion - which I will - I will pull an Israeli flag out of my pocket, and drape it over the lion, and put my foot on it," said al-Essawy, according to his one-on-one with Al-Masry Al-Youm. "The message is that even though Israel and America may be as strong as a lion - the strongest creature on the planet - they too can be defeated."