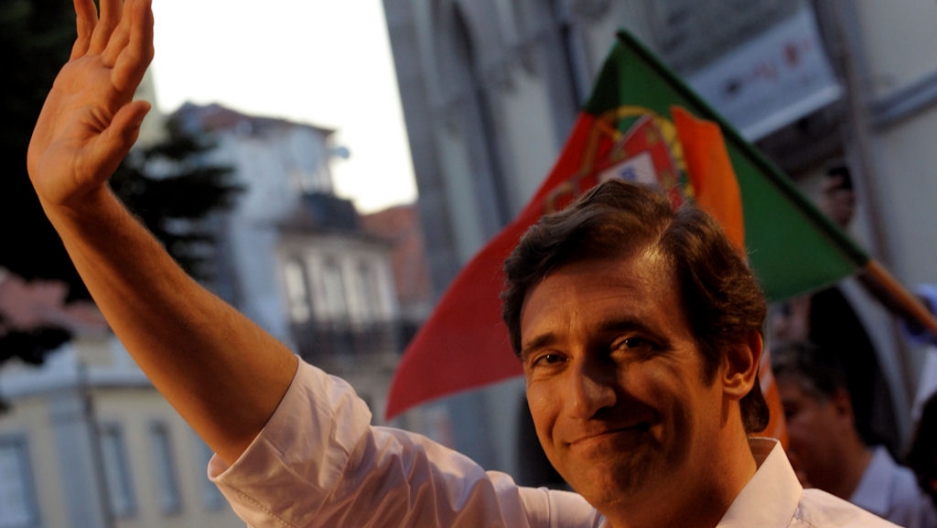 The center-right Social Democratic Party (PSD) scored a resounding victory, winning 38.6 percent of Sunday's vote compared to just 28 percent by the governing Socialists, who have been in power since 2005.

Together with a smaller conservative party, the Social Democrats should have a solid majority to push through the austerity package demanded by the European Union and International Monetary Fund in return for a 78 billion euro bailout package.

As prime minister elect, Social Democrat leader Pedro Passos Coelho immediately pledged to meet the terms of the agreement with the EU and IMF regardless of the impact on his popularity.

“I want to assure everybody watching from abroad that Portugal has no intention of being a burden into the future for countries that have loaned to us,” he told supporters in Lisbon. “We will do all that we can to honor our commitments and to restore the confidence of the markets.”

Opinion polls ahead of Sunday's vote had raised concerns that neither the center-right nor the Socialists would be able to win a majority of the 230 seats in the Portuguese parliament. That could have led to a weak government without a clear mandate to force through the wage, pension and social security cuts, tax hikes, sales of state assets and other austerity measures required by terms of the EU/IMF loans.

Instead the Social-Democrats enjoyed a late surge in support as undecided voters gave their backing to Passos Coelho, a photogenic, 46-year-old economist who has a business background but little experience of high office.

“This expressive victory represents a clear mandate from the Portuguese people to carry out the program of reforms,” said Jose Manuel Barroso, president of the European Union's executive body, and himself a former PSD prime minister of Portugal.

Passos Coelho started negotiations with the smaller, right-of-center Democratic and Social Center to form a government. The two parties have traditionally worked together and should have little problem forming a coalition that will hold an absolute majority of seats in the Assembly of the Republic.

Positive market reaction to the result was mitigated by wider euro zone concern as Greece is expected to ask for a second bailout following the 110 billion euro agreed with the EU and IMF last year.

The euro rose against the dollar and interest rates on Portuguese state bonds eased in early trading Monday but, after early increases, the Lisbon bourse joined other European stock exchanges in falling on continued doubts over Greece.

In April, Portugal became the third euro zone nation, after Greece and Ireland, to seek an EU/IMF bailout. Although its public finances are healthier than the other two countries', Portugal's uncompetitive economy has long languished in the doldrums. Only one year in the past decade did growth rise above 2 percent and few expect the country to pull out of recession before 2013.

In a somber victory speech, Passos Coelho warned voters of tough times ahead, but insisted the reforms mandated by the EU and IMF could make the country stronger in the longterm.

“This is not a moment for triumphalism,” he told supporters. “We know the enormous difficulties which are facing us and we will need much courage and patience to face them. It will take time to see the results, this is going to be difficult, but it's going to be worth the effort.”

Defeated Socialist Prime Minister Jose Socrates immediately announced he was stepping down from frontline politics. His departure underscores the current weakness of the center-left in European politics with Socialist-led governments now surviving in just four of the 27 EU member countries — Spain, Greece, Austria and Slovenia.

Further to the left, Portugal's hardline Communist Party scored 8 percent and the rival Left Bloc a disappointing 5 percent. Both left-wing parties reject the deal with the EU/IMF and had called instead for wealth taxes and a default on Portugal's debts. They failed however to capitalize on widespread dissatisfaction with the mainstream parties.

Instead, many Portuguese showed their discontent by staying away from the polls. A record 41 percent failed to vote.