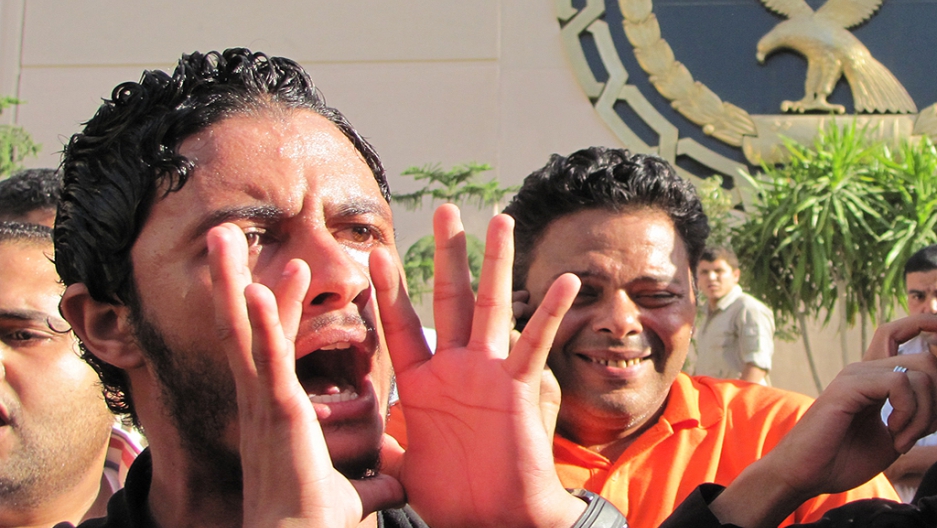 An Egyptian activist leads chants at a demonstration outside the country's feared Ministry of Interior in Cairo on June 6, 2011. Around 50 protesters gathered there to mark the one-year anniversary of the death of Khaled Said, a young Alexandria man allegedly tortured by undercover police.
Credit: JON JENSEN
Share

Egyptians activists protested against torture on Monday to mark the one-year anniversary of the death of Khaled Said, a young man allegedly beaten and killed by policemen last summer, amid fresh allegations of abuse at the hands of Egypt's security forces.

Around 50 protesters chanted anti-torture slogans under the watchful eye of a few dozen baton-wielding riot troops near the towering main gate at the Ministry of Interior in Cairo, the headquarters for Egypt's police forces. The fortress-like ministry was also one of the main targets during the country's recent revolution in January.

"The Ministry's police forces are thugs!" screamed protesters in unison.

Photographs of a badly beaten and disfigured Said, a 28-year-old from Egypt's coastal city of Alexandria, quickly spread around the internet through social media shortly after the young man's death in 2010.

Several eyewitness alleged that Said was brutally beaten by two undercover police officer outside an internet cafe in Alexandria.

Small-scale demonstrations erupted throughout Egypt over the summer, but were easily quelled by riot police.

Online, however, Said's name became a rallying cry for Egyptians protesting against torture and the regime of Hosni Mubarak. A Facebook group named "We are all Khaled Said", which was created by former Google executive Wael Ghonim, attracted hundreds of thousands of fans and was one of the driving forces behind Egypt's recent revolution.

Mubarak resigned from office on February 11 in the face of overwhelming popular anger.

Even still, many Egyptians believe that the practice of torture is alive and well.

Hundreds of Egyptians protested outside a police station in downtown Cairo on Friday night after a microbus driver died, reportedly following a run-in with police.

The station was pelted with rocks and angry rioters torched a security wagon in the streets.

Egypt's interim government is investigating the death of the driver, Mohamed Abdel-Aziz, according to the Associated Press.

"If the police forces have been trained against using torture since the revolution, we are not seeing it yet," said Mostafa Hussein, a psychiatrist formerly with Egypt's El Nadim Center for the Rehabilitation of the Victims of Violence.  "State security may be dissolved, but we have not seen any real change in Egypt yet."