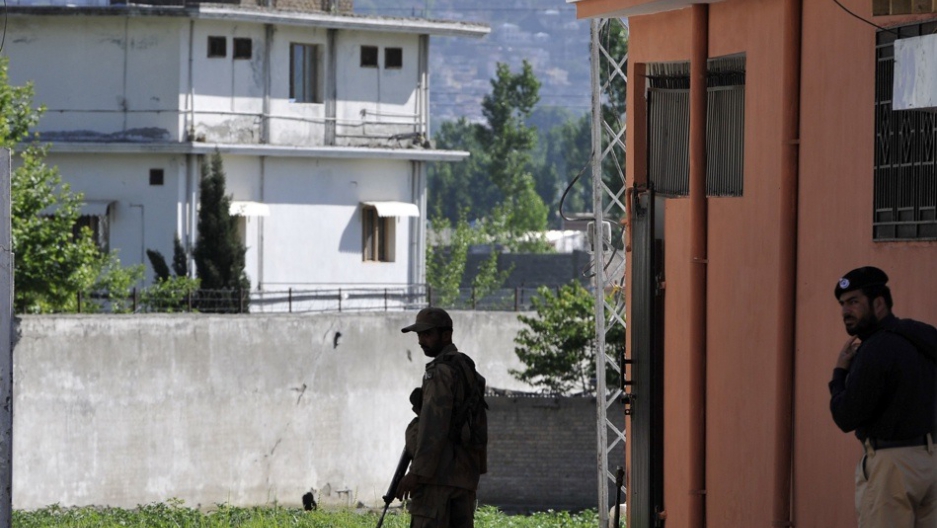 Pakistani military and police officials cordon off a street beside Osama Bin Laden's final hideout in Abbottabad on May 8, 2011.
Credit: Aamir Qureshi
Share

ISLAMABAD, Pakistan — Headquartered a stone’s throw from where Osama bin Laden was killed is Pakistan’s Frontier Force, an elite military regiment with close ties to the United States.

If you have read the deluge of reports, it might seem like the militaries of Pakistan and the United States have been forever at odds.

Both sides have publicly, and vehemently, criticized each other following the U.S. raid in Abbottabad that killed bin Laden. And the United States has long voiced its frustration with the Pakistan army for, among other things, not pursuing militants more aggressively in the tribal region of North Waziristan.

But privately, analysts say, the two countries actually get along quite well. And even before recent overtures by Secretary of State Hillary Rodham Clinton and U.S. Sen. John Kerry — who both visited Pakistan recently and who announced that Pakistan and the United States have agreed to cooperate more closely on counter-terrorism measures — the two countries’ militaries were working closely together.

In fact, they have a long and storied partnership, one that began in earnest in the 1980s during the Afghan war against the Soviet Union and that continues today in the so-called war against terror.

“The Pakistan army … has had a long history of working together with the U.S. Army, not only in Afghanistan, Iraq and Somalia, but in Haiti, Bosnia and other parts of the world,” said Ikram Sehgal, a Karachi-based defense analyst who is the editor of the Defense Journal of Pakistan.

And through it all there has been the Frontier Force.

Perhaps most significantly, it was the Frontier Force that helped to rescue U.S. rangers trapped in Mogadishu after two Black Hawk helicopters were shot down by rocket-propelled grenades in 1993. Pakistan’s involvement was a detail left out of the popular book, "Black Hawk Down," and the even more popular movie of the same name.

In his memoir, former Pakistani President Pervez Musharraf criticized the filmmakers of "Black Hawk Down" for ignoring Pakistan’s role in the rescue mission.

“When U.S. troops were trapped in the thickly populated Madina Bazaar area of Mogadishu, it was the Seventh Frontier Force Regiment of the Pakistan Army that reached out and extricated them. The bravery of the U.S. troops notwithstanding, we deserved equal, if not more, credit,” Musharraf wrote. “But the filmmakers depicted the incident as involving only Americans.”

Although Pakistan has officially denied playing any role in the operation that killed bin Laden on May 2, interviews with several local residents, analysts and senior intelligence officials suggest that, in fact, there were elements of both the intelligence community and the army who knew of the raid beforehand and that there was more cooperation between the two countries than officials are publicly admitting.

Political analysts said Islamabad is likely downplaying its role in the operation to protect itself from a potential backlash from its citizens, who have grown impatient with U.S. activity throughout the country, including the ongoing drone attacks in North Waziristan that have killed, by many accounts, hundreds of civilians.

Niaz Ali, who lives a few streets away from the compound where bin Laden had been hiding, said that he first heard the sound of a helicopter at about 12:15 a.m., almost 50 minutes before the operation began. He said it hovered over the area until, about five to 10 minutes later, it landed on the grounds of the Frontier Force training center. He did not know whether it was a U.S. or Pakistani helicopter.

Frontier Force officials, however, rejected Ali’s version of events. Officials said the unit played no role in the operation against bin Laden despite its history of cooperating with the United States and despite being based less than a half mile from the Al Qaeda leader's hideout.

The coincidence has, unsurprisingly, raised eyebrows. But no officials, government or military, were willing to comment on whether or not the Frontier Force had prior knowledge of the attack.

Sehgal simply said that he believed the decades-long cooperation between the Frontier Force and the U.S. Army remained strong and that the two forces both trusted and understood each other.

“Frontier Force officers have been trained by the U.S. Army … They have worked together not for months but for years,” he said. “Therefore, there has always been a sense of comfort and understanding between the two sides that has led them to trust and rely on each other.”