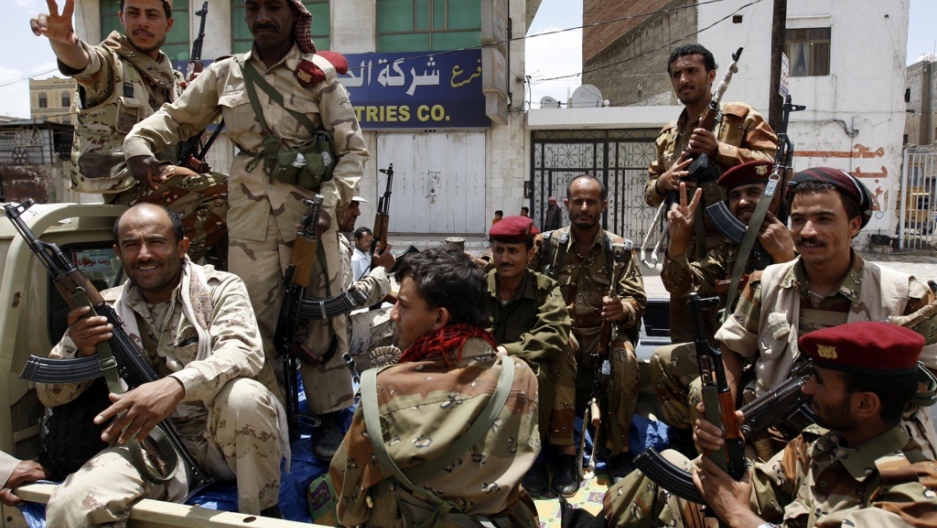 Yemeni soldiers who joined sides with anti-regime protesters flash the V-sign for victory during a demonstration calling for the ouster of President Ali Abdullah Saleh in Sanaa on June 3, 2011.
Credit: Ahmad Gharabli
Share

SANAA, Yemen — President Ali Abdullah Saleh, wounded in an attack on his palace Friday, has agreed to be flown to Saudi Arabia for medical treatment, according to reports quoting Saudi officials.

But Yemeni officials insist that Saleh remains in the country.

The uncertainty comes a day after Saleh was injured by a mortar attack on his presidential compound.

First on Friday there were reports that Saleh was killed in the attack. Then came reports that he had gone to Saudia Arabia for medical treatment.

To quell the rumors, Yemen state television gave assurances that Saleh would address the nation. After several hours Saleh made a late night address, an audio recording of him reading a statement. He did not appear in front of cameras.

Saleh assured the nation that he was “well and in good health,” but he sounded winded and groggy and he slurred his words, as if under heavy medication.

He said that seven people had been killed in the attack on the presidential compound, including Sheikh Ali Mohsen al-Matari, an imam at the compound’s mosque. The “outlaw thugs” who had perpetrated the assault would be “investigated,” he added.

The full extent of Saleh's injuries are still unclear. He is reported to have a shrapnel wound 3 inches below his heart and to have second degree burns on his face and chest, according to the BBC.

Saleh and the others were injured when the presidential palace was shelled by anti-government forces when Saleh attended Friday prayers at a mosque inside his compound, forcing him and other officials to run for cover. The attack caused an explosion in the mosque. Seven of the president’s guards were killed in the attack and at least nine people were wounded in addition to Saleh.

Suhail, an opposition television station, initially reported that Saleh had been killed in the attack. When the false reports of the president’s death reached Sanaa’s Change Square, the crowd erupted in cheers and began dancing and celebrating.

However, the Yemeni government quickly denied the reports.

“President Saleh was not killed in this horrendous attack on his compound,” said one Yemeni government official. He didn’t comment on the condition of other prominent government figures that were with him when the attack took place.

Shortly before the Friday attack on the president, fierce fighting had broken out between government troops and rebel tribesmen in Sanaa’s wealthy Hadda neighborhood. Hundreds of people have been killed since violence erupted last week in the Yemeni capital.

Government forces fired rocket-propelled grenades across a major road at the homes of Sheikh Hamid al-Ahmar, a well-known rebel tribal leader and powerful businessman, and Maj. Gen. Ali Mohsen al-Ahmar, a top general who defected in March and who has ever since assigned his troops to protect protesters.

As the fighting raged, local residents dove for cover and fled the crossfire in SUVs. Some of the locals, who were already armed as a precautionary measure, began firing their AK-47s out of desperation.

“They are attacking Hamid’s house,” screamed one resident as he fled across the road, nearly being struck by an SUV that was speeding away from the violence.

An hour later, at about 1:30 p.m. local time, several large explosions were heard in the direction of the presidential palace.

The attack was blamed on the Hashid confederation, a tribal force loyal to the al-Ahmar family that has been engaged in the fierce gang-style street battles that have rocked the capital over the last week.

But Sadeq Al-Ahmar, the tribal leader of the Hashid confederation, denied responsibility for the attack. He claimed that Saleh ordered the shelling himself to justify an escalation in the fighting, which has derailed a months-long peaceful protest movement and is threatening to drag Yemen into a protracted civil war.

The attack appeared to be well-planned and coordinated, hitting Saleh at his most vulnerable and hitting targets with incredible accuracy.

Yemen’s political opposition has blamed the government and Saleh himself in the attack, citing that it was ordered by the president to justify an escalation of violence in the capital.

Yemen’s state television showed images of damaged government buildings as its anchors decried what they said was a coup against a constitutionally legitimate government.

All roads leading in and out of the Hadda district were closed and the usually busy part of town, normally abuzz with car horns and well-dressed youngsters, fell deadly silent.

Residents have all closed the ubiquitous steel doors in front of storefronts and homes to protect themselves and their properties from the fighting.

One shop owner, who frantically rushed to close down his pharmacy, was telling cars to turn back, warning of further attacks in the area.

“Get out before they start shelling,” he screamed as he ran to flag down one of the few remaining taxis fleeing the area.

Shelling did resume after the initial attack as more than 10 mortars came down around the area of Hamid al-Ahmar’s heavily fortified home.

Sporadic AK-47 and RPG fire also continued in the Hadda district hours after the attack on the presidential compound.