In the next few weeks, thousands of freshly-minted MBA grads from the nation’s top business schools will be heading off for six-figure salaries at investment banks and tech start-ups. Then there are the handful of students from the MIT Sloan School of Management who will be heading to the slums of Nairobi… to build toilets.

“This is no different than working in a start-up in Silicon Valley,” said Ani Vallabhaneni, a member of a multi-disciplinary team from MIT that is heading to Kenya and launching the company “Sanergy” – a contraction of sanitation and energy. “Initially, yes, the salaries aren’t market rate. But you take what you need to live, right? So, in terms of student loans, rent, food and beer.”

Vallabhaneni and his team developed a business plan for turning a public health crisis into an economic opportunity. Some 2.6 billion people in the world lack basic sanitation, according to the World Health Organization, and the MIT students think they can help change that.

Vallabhaneni said the idea for a company was hatched when he and fellow MIT students studied sanitation conditions in places like Kenya. In parts of Nairobi, for instance, many people defecate in plastic bags, then throw the bags on the street. Others pay 6 cents to use makeshift bathrooms.

“Typically they’re just holes in the ground with plastic sheeting around,” Vallabhaneni said. “What that shows you in terms of the fact that they’re paying to use unhygienic pit toilets is that there’s a big value for privacy and dignity.”

The Sanergy team thinks people will pay that same 6 cents to use Sanergy toilets, essentially modified porta potties. They’re far from glamorous, but a huge step up from current conditions.

It will cost Sanergy about $200 to build each toilet. They’ll then turn around and sell it to a Nairobi resident for $400. At 6 cents a visit, Sanergy projects the new small business owner – essentially a franchisee – can make back his or her investment in about four months. 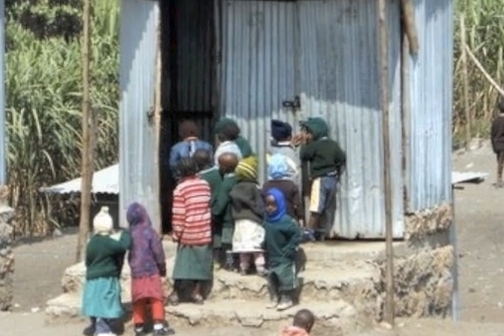 But that’s just the start of the business model.

“You build a toilet and then what? It fills up, and then what? Right? There’s no way to actually treat and dispose of the waste,” said Vallabhaneni “You actually need to build out the entire sanitation value chain to effectively tackle this problem.”

It’s that phrase—“the sanitation value chain”—that perhaps sums up the inspiration behind the new company. Where others see a problem, the students behind Sanergy see a resource.

“The Sanergy employees each day would collect the waste from each toilet and bring it to a central location,” explained Linsday Stradley, another member of the Sanergy Team and a recent graduate from the MIT Sloan School of Management.

The company will charge the franchisee, $6.25 a month to take the waste to a processing facility.

“Which then leads to the third part, which is conversion,” said Stradley. “So converting that waste into electricity and fertilizer that we can sell and generate the revenue for the business as a whole.”

And this is where the company believes there’s real money to be made.

There’s no great technological breakthrough in any of this. Instead, it was the combination of a solid business plan with solutions to numerous development problems at once that impressed the MIT judges, people who know a thing or two about what makes for a successful start-up. The contest has helped launch more than 150 companies, since the competition began in 1989, now worth some $16 billion dollars collectively.

But this is only the second time a company with a true social mission was chosen as the winner.

“We didn’t give the prize because these guys are doing something great for the world, or better for the world, than the other guys,” said Tim Rowe, a judge this year. He founded the Cambridge Innovation Center, a business incubator, across the street from MIT.

“That wasn’t our challenge as judges. Our challenge was to look at each of these as a stand-alone business and say: ‘What has the biggest chance of significant success?’ The fact that they are making money at this is what makes it likely to succeed,” said Rowe.

Conquering a problem that governments and charities have failed to solve won’t be easy. But Rowe believes that the market can stand up where other solutions have failed.

“It’s not like the old-fashioned, ‘Hey we’re going to try and give wheat to starving people in Africa.’ That works this year, but then what about next year? It doesn’t make the system work,” said Rowe.

The MIT students get this.

And the students have already conquered business rule number two: Get money to make money. They have $100,000, courtesy of MIT, to get their project going.

Vallabhaneni and Stradley say they hope the innovation prize will prime the pump for other investor funding for their start-up.

For now, their plan is to work on building up their sanitation business in Kenya for the next 12 to 18 months. If it works, they hope to expand Sanergy throughout sub-Saharan Africa and India.