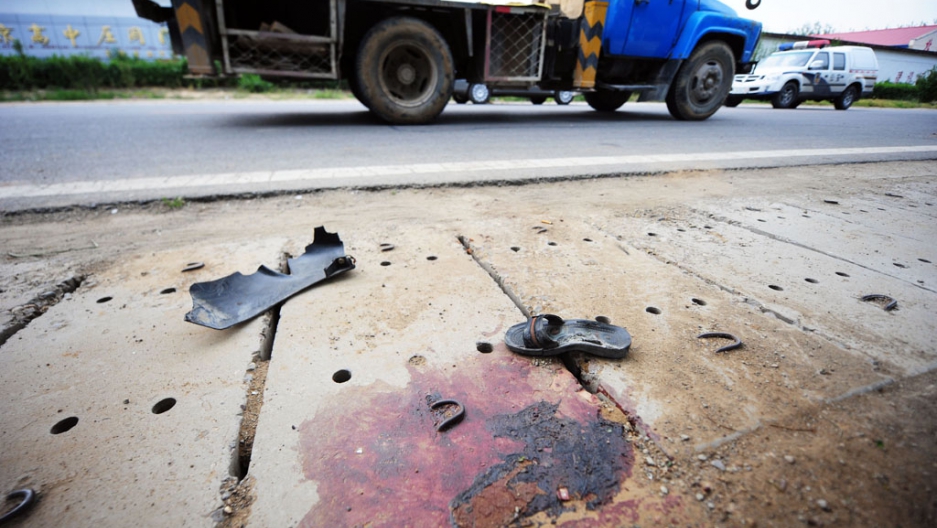 China's roads are among the world's most dangerous, with traffic laws and safety widely flouted, as almost 70,000 people died in road accidents in 2009, or around 190 fatalities a day, according to police statistics.
Credit: Stringer
Share

CHONGQING, China — One dark night last December, a woman begging for money in a suburb of China’s largest city was hit by a truck.

For more than an hour, she lay on the side of street moaning and crying for help. Nobody responded to her pleas. Those who heard her calls thought she was just another melodramatic beggar, trying to con passersby out of money. When someone finally did come for her, it was only to finish the job.

It took two months to find her body and reconstruct what happened. Police still don’t know the women’s identity and have released very little information about her. But they say Tian Huobo, the 23-year-old truck driver they arrested this spring, intentionally killed the woman after first running her over accidentally.

Tian hit the beggar with his truck and sped home, police say. He then found himself unable to sleep or calm down, so he returned to the scene to kill her and put the whole thing behind him. It almost worked, until someone found the woman’s body off the side of the road and police decided to investigate.

The gruesome story would be troubling enough on its own. But the fact is, it’s just the latest among similar incidents across China in recent years.

In the past two-and-a-half years Chinese media have reported on at least 10 other hit-and-run cases where the driver is believed to have intentionally killed someone or knowingly let them die after first accidentally running them down.

Just recently, a court upheld the death sentence for 21-year-old music student Yao Jiaxin of Xi’an. In December, Yao stabbed to death a 26-year-old waitress he had hit with his car. He later explained that he thought if the woman survived the accident, she and her family might “badger me and my family endlessly for compensation.”

Several of the hit-and-kill cases have involved children, including a horrifying one of a man in an Audi in Jiangsu province running over a 3-year-old four times.

Chinese netizens, typically appalled at the incidents, point to underlying problems with China’s medical care, insurance and legal systems. In short, it’s cheaper to kill someone in China than be responsible for a lifetime of medical costs.

Victims’ families generally can’t bring costly lawsuits against the perpetrators, but rather must rely on a carefully proscribed compensation formula when someone is killed. The driver is typically responsible for medical costs, rather than an insurance company, if the victim lives.

A driver might have to pay $40,000-$50,000 for running over someone and killing them, but paying medical bills for a seriously injured person for months on end can easily and quickly outpace the price of death.

It all sounds very logical, but Chinese social scientists say there’s something beyond the simple economics of killing someone. The problem goes to the heart of much deeper and potentially dangerous troubles in this society.

With a rapidly increasing wealth gap and little emphasis on morality, money has become more important than anything, experts say. China’s younger generations frequently view money above all else, so make decisions often not based on what’s right or wrong.

The gruesome hit-and-runs are just one troubling manifestation of poison in the society, said one outspoken professor who didn’t want his name used. He listed China’s ongoing food safety problems, systemic corruption and the government’s own crackdown on artists and writers as further symptoms of a breakdown.

But Mai Ai, a sociologist and the China University of Political Science and Law, said it’s unclear whether these incidents are actually on the rise if media reports have played them up. In any case, he said, there are underlying problems that need to be addressed.

“It shows people don’t have the idea of responsibility; this is not only about the drivers in these situations, but is a general phenomenon,” said Mai. “When people are in a stressful situation, they ... try to avoid taking responsibility.”

“What is more, there is a lack of respect and fear of life among the people. They think life has different values, that, 'Mine is more important than others,'” he said.