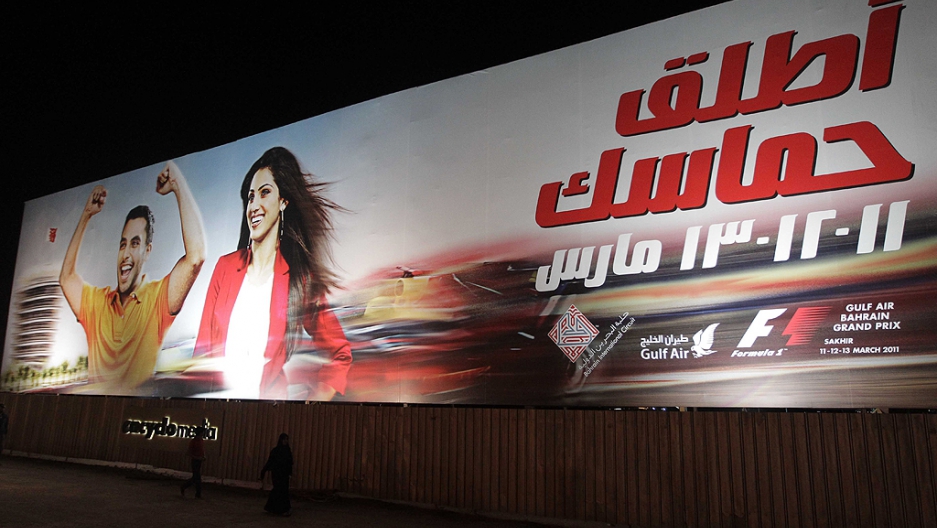 A Bahraini walks past a billboard advertising the upcoming F1 Grand Prix which has been canceled due to the turmoil and days of protests against the ruling government in the capital Manama, on February 21, 2011.
Credit: JOSEPH EID
Share

The World Motor Sport Council decided on Friday to proceed with the Bahrain's Grad Prix later this year, amid heavy criticism over the tiny island nation's "heavy-handed" response to protests that started earlier this year.

This year's popular Formula One race now will now take place on October 30, according to ESPN.

The Bahrain Grand Prix, which was originally scheduled for March, got postponed after Tunisia-inspired demonstrations erupted across the tiny island state in mid-February.

Most of the protests were eventually quelled with baton-wielding riot police, tear gas, and even a contingent of Saudi-led foreign troops.

Two protesters were killed by police forces in February, prompting Amensty International to demand an end to "heavy-hand tactics" by an "excessive police force."

An online petition campaign under the banner "No F1 in brutal Bahrain" had received over 300,000 signatures as of Friday.

The decision-making body of the F1, however, said that holding the race would lead to a reconciliation between Bahrainis.

"The WMSC feels that reinstating the Grand Prix is a means of helping to unite people as the country looks to move forward, and also recognizes the commitment made by the Formula One teams, their employees and families, and personnel associated with the Championship including the local team of volunteers who are so vital to the event," said the statement, as reported by ESPN.

Meanwhile, police opened fire on protesters in Bahrain's capital city on Friday, according to the Associated Press.  Earlier this week, Bahrain ended its state of emergency, which had been in place since March.

Bahrain's Shiite majority has long complained of political and economic discrimination, especially a lack of representation in government.

Many of the Shiite-dominated communities outside Manama are underdeveloped compared to Bahrain's flashy, cosmopolitan capital city.

Bahrain is one of the strongest U.S. allies in the Middle East, providing the Americans a strategic counterbalance to Iran.

The Gulf's smallest nation houses a major U.S. naval base serving the Fifth Fleet, and is also home to U.S. Patriot missile batteries, according to a 2009 secret American cable released by Wikileaks.