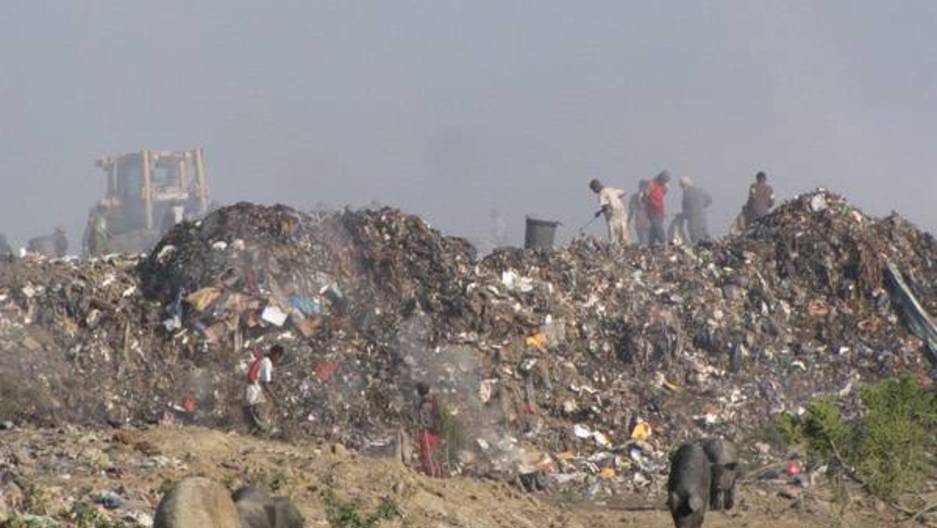 The village of Truittier, on the northern edge of Port-au-Prince, has a certain charm. Pigs snort and fowl cluck amid vegetable gardens and cactus hedges lining dirt paths. But the village’s raison d’etre lies in plain sight — piles of sorted trash in almost every yard. Truittier exists because it’s next to the city dump, where residents scavenge for recyclable materials.

It was never pleasant living here, but things have gotten much worse since last year’s earthquake. Truittier resident Gerald Desrosier points toward a pond at the dump. “They empty toilets over there,” he says. “Right over there.”

Every day, a stream of trucks empties hundreds of portable toilets into the pond. The toilets serve the million-plus displaced people living in camps around Port-au-Prince, which has no sewage treatment plant.

Elsewhere across Haiti, millions of people don’t even have toilets. Even before the earthquake, there was said to be only one toilet for every 1,000 Haitians. And the country’s poor sanitation system has contributed to chronic public health problems and deadly cholera outbreaks, like the one that ravaged Haiti last fall.

Here in Truittier there have been all kinds of health problems related to the waste, Desrosier says. And residents have to smell it when the wind blows toward the village. Desrosier‘s neighbor, Joseph Eguens, says there have been demonstrations against the dumping, but that nothing’s been done.

The aid groups that run the camps say they’re not happy with the dumping location, either. But other organizations are trying to keep sewage from being dumped at all, anywhere. 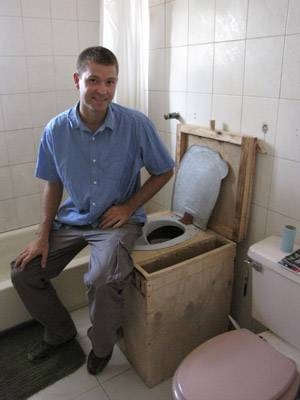 Just up the road from Truittier, the sprawling slum Cite Soleil is known for its extreme poverty and episodic gang violence. But in one important way, it’s just like much of Haiti—the large majority of people do not have toilets, according to Nick Preneta, of the group SOIL — Sustainable Organic Integrated Livelihoods. As a result, Preneta says, human waste here often winds up in the worst places, like the local canal.

The canal is a reeking mass of trash and human waste. It’s even worse in the rainy season, when it sometimes overflows and the raw sewage floods into people’s homes.

SOIL is trying to help change that — and change the way Haitians think about their waste. After the earthquake, a local group asked SOIL to help set up a sanitation system here in Cite Soleil. It would be based not on porta-potties, or even a municipal sewer, but on composting toilets.

Cite Soleil’s composting toilets have separate removable compartments for urine and solid waste. Instead of flushing, users throw in sugar cane scraps from a local rum factory to cover the waste and start the composting process. Prenata says the five composting toilets at this site are used by an estimated 100 people a day. When they fill up, volunteers haul the waste off to a nearby site for what’s called thermophilic composting.

“If you get it right, the temperature gets really hot,” Prenata says. “The microorganisms eating through the feces and the carbon generate a lot of heat.” That kills off pathogens like E. coli and the cholera bacteria. Diseases avoided, wastewater problem solved.

And there’s another key benefit. What’s left after the composting process is a nutrient-rich organic fertilizer. Which is why experts say the simple technology is an innovative way to deal with two major problems at once—Haiti’s sanitation crisis and its soil fertility crisis.

Over centuries of land mismanagement, Haiti has lost much of its topsoil, and so its ability to feed itself. At the same time, it’s been dumping millions of pounds of potential soil nutrients into landfills and waterways, where they become a serious problem.

“So you have this issue of human waste treatment, and you have this issue of agricultural depletion,” says Brown University ecology professor Stephen Porder. “How you produce enough food for undernourished populations, and how you do that while solving water quality problems that lead to tremendous illness?” Porder says composting toilets, also known as ecological sanitation, are part of the answer, and a growing number of people in Haiti agree, including some in the Haitian government.

Paul Christian Namphy, a Haitian-American engineer who once worked with SOIL and is now an advisor for Haiti’s new water and sanitation agency, says ecological sanitation is the future. Namphy says that along with solving immediate problems, ecological sanitation increases people’s awareness of the realities of sanitation, and how communities can take charge of their own problems.

Certainly the idea is catching on in Cite Soleil, where the waste from the new composting toilets is already being put to work in a community vegetable garden. Agronomist Archibald Miracle, who manages the garden, says the compost generated here lets community to do completely organic farming. “It allows people to create their own little economy, when otherwise they would have to go to the market,” Miracle says.

Backers hope the Cite Soleil ecological sanitation project will be a model for Haiti and elsewhere. They say their biggest concern is finding a sustainable financing model to operate and expand the effort. More than a year after the earthquake, project organizers say donor fatigue has set in, and that the task ahead is largely to convince potential supporters that ecological sanitation systems are worth their investment.