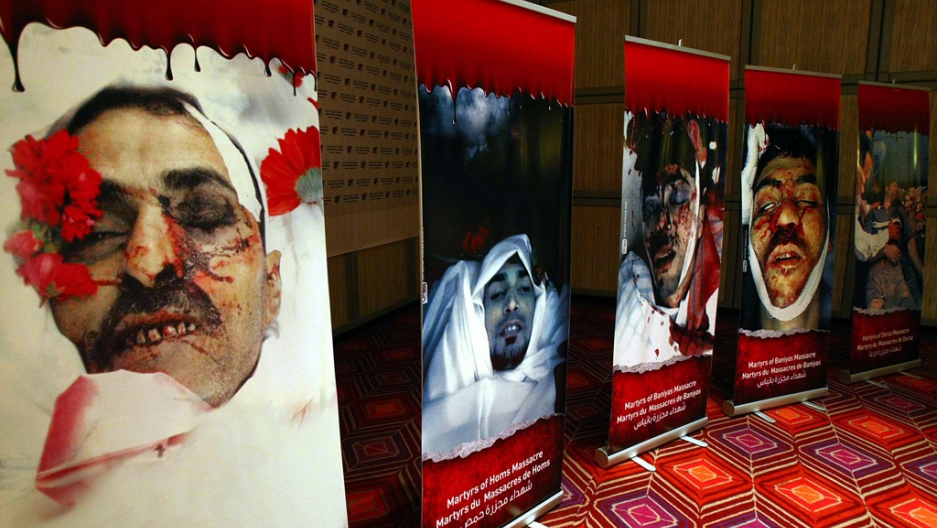 Pictures of people reportedly killed during demonstrations in Syria are displayed in Antalya on June 1, 2011 during a three-day meeting of Syrian opposition activists.
Credit: Adem Altan
Share

As if the evidence wasn't already overwhelming. Human Rights Watch has released a report that details eyewitness reports of Syria security forces gunning down peacefull protesters, complete with video.

The report, entitled, "We've Never Seen Such Horror," is based on on more than 50 interviews.

The report comes after the release of a video made by the family of the body of a 13-year-old boy that was killed while being detained by Syrian authorities. The video revealed numerous injuries to the boy, including broken bones, gunshot wounds, burn marks and mutilated genitals.

GlobalPost has also detailed instances of torture and intimidation on behalf of Syria's secret police, which locals call "Al Shabeha," or the ghosts. Several eyewitnesses detailed accounts of torture inside Syria's prisons, which are now overflowing with political prisoners. And, in hospitals, injured protesters are being denied medical care and dragged to prison.

GlobalPost's Hugh Macleod reported that when 18-year-old Murshed Aba Zeid was shot in the face by security forces outside his home in Izraa, southern Syria, his family knew it was a risk taking him to the state-run hospital for life-saving treatment. But they did it anyway.

“When we got to the hospital, some of Murshed’s relatives refused to come inside, fearing they would be arrested,” said a relative who accompanied Murshed into the hospital in early May and spoke to Insan, a leading Syrian human rights group.

She was wrong. Recovering from successful surgery, Murshed was dragged out of bed by the secret police and driven two hours north to Damascus where, according to relatives, he was held — along with hundreds of other dead and dying from the military assault on the Daraa region — inside the Tishreen Military hospital.

The ever-increasing amount of evidence of brutal violence, torture and other crimes against humanity are ramping up pressure for the international community and, specifically, the U.N. Security Council to take action against the regime of Bashar al-Assad. It was the U.N. Security Council that voted in March to approve airstrikes to "protect civilians" inside Libya from attacks by forces loyal to Libyan leader Muammar Gaddafi.

As that conflict drags out, foreign powers appear hesitant to take action in Syria.

"They need to stop — and if they don't, it is the Security Council's responsibility to make sure that the people responsible face justice," said Whitson from Human Rights Watch.